Randall Cobb is not essential to the Green Bay Packers offense heading into 2015. Any player with Aaron Rodgers at quarterback has a chance. This is not to say that Cobb isn’t a top 15 receiver, he’s definitely worthy of a $9 million per year contract.

So why not sign him? He is a playmaker. He can be a flanker, inside in the slot, or on special teams.

So with this year’s over-saturated pool of free agents that are top targets, like Dez Bryant and Demaryius Thomas, there’s no reason to think the Packers are going to let Cobb go after his best season yet – one year after a horrific leg injury that kept him out for most of the 2013-14 season.

Teams that are looking for receivers this offseason will see what everyone on the outside sees: if you want to have a great receiver, you’re going to have to pay him. After getting the most out of Cobb in his rookie contract, Ted Thompson is ready to sign the check. It just depends on how much.

Last offseason, Green Bay extended Jordy Nelson to a $39 million contract. And Nelson is arguably the most underrated receiver in the league, but the Packers took a chance on him in the draft. So why now, of all times, would Green Bay let go of a player similar to Nelson’s caliber while he’s in the prime of his career?

At the time of his departure, Jennnings was 29, coming off an injury-riddled season that saw him only produce 36 receptions for 366 yards and 4 TDs in a pretty stacked receiving corps. Jennings was offered similar money to stay with the Packers, but he chose the Vikings. This was after he rejected a sizeable offer from the Packers in the offseason.

Jennings wanted a longer contract and a new place for his family so he left.

In two years in Minnesota at age 31, Jennings has accrued 127 receptions and 10 TDs, but isn’t what he was before he left, and he is not a top-10 receiver anymore. Jennings has begun a connection with Bridgewater throwing to him, and that will continue, but for what the Vikings got, Green Bay was better served letting him go so they could pay other players.

Jennings got his chance after being drafted out of Western Michigan and developed nicely into a low-end No. 1 receiver with Brett Favre and Rodgers, and also had a stellar performance in Super Bowl XLV. But it was time to let him go and move on for the Packers.

At age 29, Jones was allowed to walk from Green Bay in 2013 after somewhat of a down year as well. Jones had 59 receptions and 817 yards and just 3 TDs. Jones, who was known to drop quite a few passes in his career with the Packers. Drafted by the Packers out of San Diego State, Jones won a Super Bowl and had a stellar 2012 season with 14 touchdowns that earned him one final contract extension from the Packers.

Jones returned to California to play for his hometown Raiders for decent money. His first season wasn’t awful with a rookie, Derek Carr, throwing to him. Jones caught 73 passes for 666 yards and 6 touchdowns. Jones was not offered a contract from the Packers because he was another aging wide receiver that wanted to be paid like he used to be. The Packers were able to draft new young receivers to develop in Mike McCarthy’s system.

Both these receivers have one thing in common: they wanted more money than the Packers could offer. But that’s not why they were let go. No, Ted Thompson and Mark Murphy let them go because they were past their prime. Past the point where they’d deserve between $8 and $9 million a year.

When you look at Randall Cobb: his age, his production and his potential, do you see any of the downsides that an older receiver, like Jones or Jennings, had? 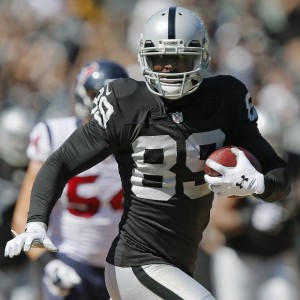 James Jones is back where he grew up.

Cobb will be 25 in 2015, but has proven he can come back from injury, and is a key cog in the Packers offense. Rodgers and Cobb have a connection that not every quarterback has in the NFL. He’s not just a slot receiver, he’s a special teams player and an excellent weapon out of any formation.

Even though the Packers already have one receiver on the roster with a $9 million per year contract, Cobb is worth the investment, and Green Bay’s management sees that. With $33 million in salary cap space this offseason, the Packers will pay almost any price Cobb wants. It will all come down to the logistics of the deal, but that shouldn’t be a long process. In fact, a deal may already be done, but won’t be finalized until minutes before free agency starts, like Sam Shields last season.

The Packers won’t get in a “bidding war” over Cobb. Both parties want to work together next season, and are inclined to work out a deal that is mutually beneficial. Another huge factor that he’ll stay? Rodgers wants Cobb back, which is a huge factor in negotiations at this point. And if he leaves, he won’t have Rodgers throwing to him. It’s pretty simple.

In today’s NFL of teams holding onto players too long, Green Bay has been a model of what to do. Cobb is not one of those players, so I expect to see him in green and gold once more next year. But if he’s not back, that means Ted Thompson had a reason to let him go.