Home NBA What To Expect From The Great 'Wall' Of D.C. and The Wizards For The 2010-11 Season
NBANBA: Eastern ConferenceNBA: Southwest DivisionWashington Wizards 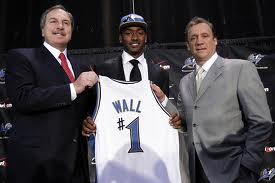 The Washington Wizards have a new face in town this NBA season and hopefully for the next 10 to 15 years in guard John Wall. Some of the usual suspects for the Wizards returned this season in guard Nick Young, forward Andray Blatche, center Javale McGee, and of course, guard Gilbert Arenas.

Head coach Flip Saunders will enter his second year with the Wizards and unlike last season, in which he had his ideal roster filled with guards (Arenas, Young, Caron Butler and Mike Miller, who both could play forward, Randy Foye, DeShawn Stevenson, Javaris Crittenton, Earl Boykins, Shaun Livingston, and Dee Brown), they may carry only five – including Josh Howard who can play both the guard and forward positions.

Guard Kirk Hinrich, who joined the Wizards via trade during the offseason, will provide the assurance at the point guard position. Hinrich is a solid defender who can front players (ask Miami Heat guard Dwyane Wade) and is not a gambler.

With the unselfishness and stability in Hinrich, Saunders feel secured that his young backcourt will be competitive.

“I like the way he (Wall) competes,” said Saunders. “That’s the main thing…when you get your guards like him and Kirk to compete like that, that’s the first line of defense.” 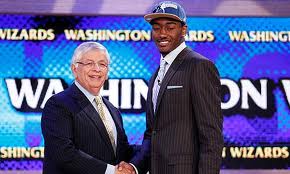 The Eastern Conference has great guard play with the likes of Rajon Rondo of the Celtics, Jameer Nelson of the Magic and Derrick Rose of the Bulls to name a few. It was extremely important for the Wizards to land Wall in the draft over the summer to compete in that area. But in order to truly compete in the East is to be physical in the paint – which is not the Wizards’ strong point.

Based off past performances, Blatche and McGee don’t want to give love taps in the paint and they prefer to play from the perimeter, unless they are running a break. The jury is still out on the new young big bodies on the Wizards’ roster to be physical against the big boys of the East, so don’t hold your breath.

Fortunately for them, Wall processes an important skill that most points don’t have, the ability to get the ball into the playmaker’s hands down low. With Wall’s speed, basketball I.Q. and ball handling ability, everyone on the front will benefit and some will have All-Star caliber seasons largely due to him. 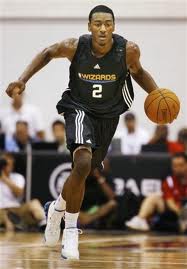 Therefore, the Wizards must keep up with Wall and pay attention because the ball will be coming to them when Wall is on the floor. “I think we came out more aggressively,” said Wall. “We have a lot people that can score on this team and I try to keep feeding them the ball to make everyone happy.”

Other than the expectations of the Wizards to not be physically competitive in a half-court setting, the Wizards will be fearless to a degree because they will run against any team and be competitive nonetheless. The Wizards should be better in the transition game.

In times past, trailing Wizards weren’t appeared to be ready for the ball and didn’t keep up with the ball handler. The Wizards have speed in all the positions so it shouldn’t be any issues because of Wall’s ability to setup his teammates.

“I have a big role as a rookie, and I feel I can reach expectations to try and keep everyone happy and win games,” said Wall. “We have to know we’re not going to win every game, some nights might be bad but we’re going to play hard and keep getting better.”

Probably the next best thing for the Wizards this season is that Arenas will return to his nature position at shooting guard. He is without a doubt a pure scorer and he will, because of Wall, return to his All-Star form because the only thing Arenas has to worry about is putting the ball into the basket, in which that’s something he can do with ease.

In return, Arenas’ ability to score freely will help Wall tremendously this season because that will remove some of the pressure off of him to score.

Saunders is a defensive minded coach who love to pressure the ball in the backcourt. Young must improve and be consistent in his play because his role off the bench will be critical. The Wizards probably won’t make the playoffs because of the much improved Eastern Conference, but they will have a chance because the East is extremely top heavy with the likes of the Celtics, Heat, Magic, Bulls, and perhaps the Hawks.

However, Wizards’ fans can expect a quality product on the front night in and night out and Saunders will see to it this time around with ‘the Great Wall’ in place. 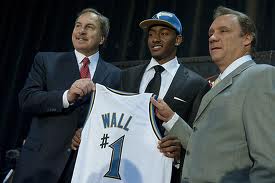 “We want to make sure all these guys get an opportunity to play really well,” said Saunders. “This team is more trusting with each other, and we have a lot of young guys that are committed to learning. I also think our defense is pretty solid.”