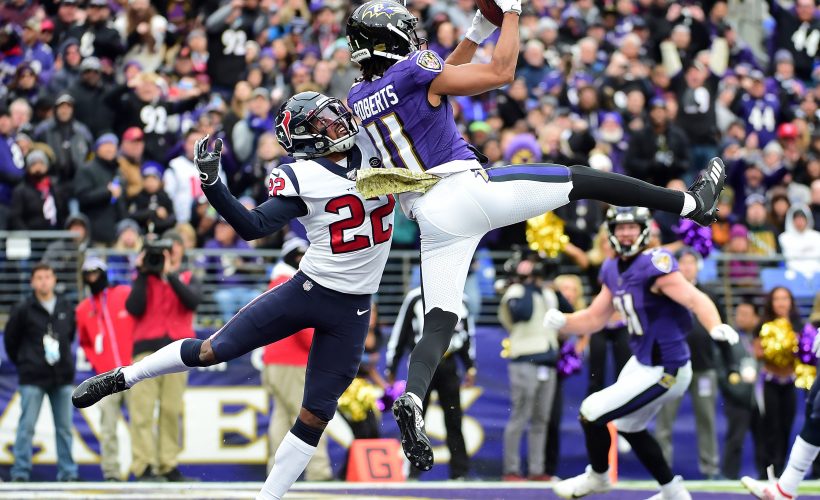 Week 11 of the NFL was as great as it gets as the postseason chase begins. The best part–several NFL Regional Combine pioneers were at full display.

In Week Two of the 2015 NFL season, then, Oakland Raiders wide receiver Seth Roberts scored the game-winning touchdown against the Baltimore Ravens with :40 remaining in the that contest.

Then, in Week Four of 2016, Roberts haunted the Ravens for another score early on in the closely contested matchup. Clearly, Roberts had good success against the Ravens. In Week 11, Roberts garnered more history involving the Ravens, but this time, it was for the Purple and Black.

Roberts signed a one-year deal with the Ravens during the offseason and has quietly made big plays throughout the season. The Ravens are a ball-dominate team on the ground and pass-happy towards their three reliable tight ends.

When Roberts’ number is called, he is normally always ready, like he was against the Houston Texans.

With 9:24 left remaining in the first quarter, the Ravens faced first-and-10 from the Texans’ 15-yard line. Ravens quarterback Lamar Jackson received the ball from shotgun, dropped back, stepped into the pocket and delivered a pass over the middle to a leaping Roberts as he skied over Texans cornerback Gareon Conley for a 15-yard touchdown.

That was Roberts’ only target for the afternoon, and it counted.

GETTING MORE FROM MOORE II

With the return of Indianapolis Colts quarterback Jacoby Brissett, the team is primed for a divisional run. Enter Colts cornerback Kenny Moore II, who was out to dominate each chance he could get.

Moore II was flying all over the field with pure aggression against the Jacksonville Jaguars. Moore II led the Colts in tackles, including a sack that was for a nine-yard loss.

Early in the second quarter with 13:26 left on the clock, Jaguars quarterback Nick Foles received the ball from shotgun formation. Moore was lined up on the outside showing press-man against the outside-slot receiver.

After the snap, Moore II quickly exploded away from the receiver and broke off on a corner blitz untouched beaming towards Foles. When Foles saw Moore II coming in hot, he ducked down and Moore II clipped the signal caller at his legs for the sack.

Moore II also had a pass defensed as he was truly electric throughout the contest.

The Combine Report: Midseason Report - Offensive RC Pioneers Will Take It To The Next Level Previous post

LockerTalk Podcast: How Are The NFL Caretakers Faring At The Midseason Point? Next post