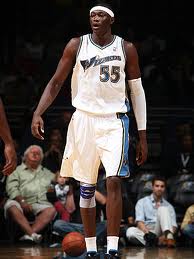 (Washington D.C.) — The Washington Wizards announced Sunday that they have re-signed center Hamady Ndiaye to help fortify a frontcourt, which badly needs a presence.

The 2009-10 Big East Defensive Player of the Year from Rutgers University returns to the Wizards after appearing in 16 games for the club last season, where he averaged 0.9 points, 0.4 rebounds and played five minutes per game.

The 7-0, 235 lbs. native of Senegal was originally selected by the Minnesota Timberwolves with the 56th overall pick in the 2010 NBA Draft before his rights were traded along with the rights to Trevor Booker in exchange for the rights to Lazar Hayward and Nemanja Bjelica on draft night. 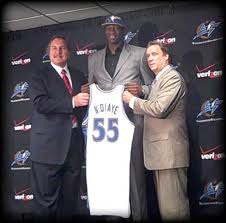 “Hamady gained valuable experience when he received more playing time at the end of last season and worked hard this summer to continue to improve,” said Wizards President Ernie Grunfeld.  “His tremendous attitude and work ethic make him a valuable piece of the team’s chemistry.”

Ndiaye spend some time with the Dakota Wizards of the D-League before coming to Washington on Feb. 4, 2011.

Ndiaye hopes to join the likes of rookie forwards Jan Vesely and Chris Singleton and center Ronny Turiaf to support centers JaVale McGee and Booker and forwards Andray Blatche and Rashard Lewis in order to compete against the better, big teams of the Eastern Conference.