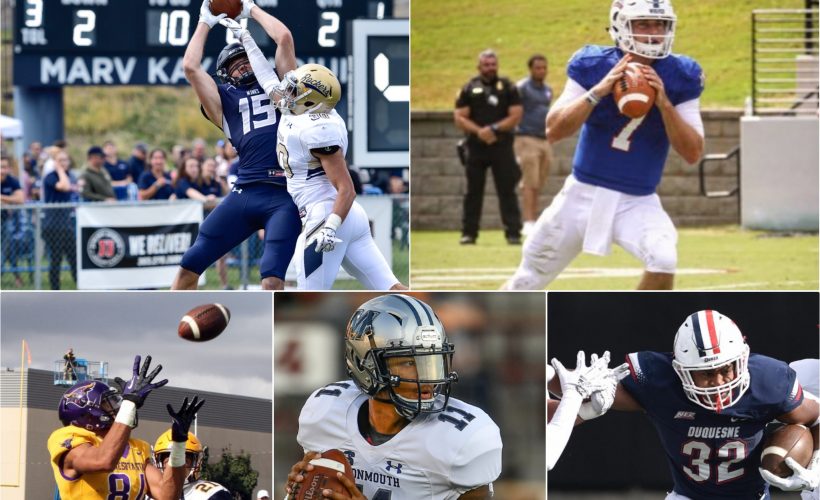 Who Will Be The NFL's Next Best Thing, Lurking From Under The Radar?

The nature of a football player is to never give up. Can not give up on a play, on a down or any situation involving success on the field. But it all starts with not giving up on a dream.

For the Overlooked Unknown Talents (O.U.T) as they pursue the limited opportunities the NFL will present in 2020, the battle to get to the next level of football will be intense. These standouts were counted out by many – which is completely fine because these athletes did not count themselves out.

The NFL Regional Combine was once a symbol of hope for many NFL hopefuls. Now, platform is stage for a select few. Some of the O.U.T. Listers may have a chance for the generational changing workout session with the league. If not, it is back to the grind as these pioneers rely on themselves.

The only thing these trailblazers counted on were their blessings as they took advantage of every opportunity allotted to them, which got them this far.

With the influx of talent under the radar, it is time to place a beacon of light on several quality players for the NFL to recognize now. Whether team scouts want to keep some of these players on the hush-hush, let’s blow the horn loud – with pride – before the collegiate season starts.

The powerhouse talents are being showcased, why not the little guys?

NOAH JOHNSON (ALCORN STATE) – 6-0, 195-pounds – Play-Action style quarterback – 2018 SWAC Offensive Player of the Year. 2018 SWAC Championship Offensive MVP. 2018 All-Conference First-Team. One of four finalists for the HBCU Player of the Year Award. One of 25 finalists for the Walter Payton Award (nation’s best player in the FCS). Finished with 2,207 passing yards, including 15 touchdowns and nine interceptions. On the ground, he rushed for 1,080 yards and 11 touchdowns. Strong arm, especially on the run, elite speed for the position, despite running ability Johnson has patience, good awareness, decent mechanics in the pocket.

WILLIE CANDLER (WEST GEORGIA) – 6-0, 195-pounds – Pro-Style quarterback – – All GSC Football Second-Team in 2018. Finished with 2,681 passing yards, including 25 touchdowns and four interceptions, and rushed for 399 yards and five touchdowns. Protects and takes care of the ball, makes great decisions, good awareness and vision, solid touch, especially over the middle, pocket awareness, good mechanics (which is important at the next level), smart, leader.

CRAIG RUCKER (MARS HILL) – 5-7, 170-pounds – Finished with 1,234 receiving yards and 13 touchdowns. Elite speed for the next level, break away, enjoys blocking, great in the open field, solid stop-start-go acceleration, solid in traffic, really strong for size, agile, elusive, not easy to bring down.

The Combine Report: Preseason Week Two - Zylstra Was Perfect, Smith Gets Into The Endzone Next post