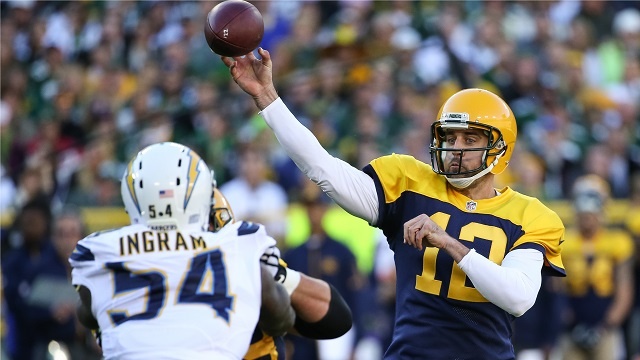 Home NCAA Football The NFL Franchise Quarterback: Why Is There A Double Standard?
NCAA FootballNFLOff the RadarUncategorized

Who’s the classier quarterback? If you went by their dossier, Quarterback A, while not squeaky clean, seems a little classier.

Why is Peyton Manning seen as a classier quarterback than Cam Newton? Years of equity. More polished profile.

Or is it because he’s white?

Newton was vilified most of the season because he wanted to “Dab” on them boys. Fans wrote letter to the editors lecturing him on sportsmanship and how to be a safer Negro. He walked out of the Super Bowl post-game press conference and a former NFL player, Bill Romanowski, called him a “boy.”

In the lead up to the Super Bowl, Manning was accused of using HGH to recover from his multiple neck surgeries. I talked about it on my radio show–“The Shop With J.Short”–and a few pundits discussed it. But no one vilified him. To make matters worse, Manning is being named in a lawsuit against his alma mater, Tennessee.

Manning is named because he was accused of sexually assaulting a team trainer, Dr.Jamie Naughright. Shaun King of the New York Daily wrote a lengthy piece about it.

I don’t think Cam deserves a pass for his behavior. He shouldn’t have stolen a laptop. He was involved in a pay-for-play scandal in college. And he is a bit of a showboat.

If Cam is being judged harshly for minor transgressions, why is Peyton getting a pass for major ones?

It’s a troubling but consistent pattern. Black quarterbacks are held to a much higher standard than white ones.

Mike Vick doesn’t deserve a chance to play quarterback in the NFL. But Ben Roethlisberger, after getting accused of sexual assault twice (2009 and 2010), deserves a chance to lead an NFL team. Roethlisberger didn’t just reform his image, but he signed a four-year, $ 87.4 million dollar extension in 2015.

That’s one example. There are others.

Colin Kaepernick was criticized for having tattoos. David Whitley, an AOL Fanhouse columnist, even likened him to a San Quentin criminal. He never mentioned how Kaepernick’s tattoos were of bible verses.

Jameis Winston had a great two year run at Florida State. He won the Heisman and led his team to a National Title. He’s done the right things since entering the NFL. He put his head down, got in his playbook and won the Rookie of the Year.

But he’ll forever be tainted by a sexual assault allegation levied against him in college.

Johnny Manziel had similar troubles in college after winning the Heisman as a freshman. Unlike Winston, Manziel carried his troubles to the NFL. He’s already been in rehab and was accused of domestic violence twice this past football season. In one case, he busted his girlfriend’s eardrum.

There have been no letters to the editors or even calls to suspend him, although I do expect him to be missing a few game checks if a team signs him after the Cleveland Browns release him in March.

All you see is people reaching out to help him. And there’s nothing wrong with that. But would the same courtesy be extended to Winston if he made similar choices?

That’s the reality of being the Black quarterback in the NFL.

Cam dances and gets a letter. Aaron Rodgers does a pelvic thrust and gets a commercial.

I really feel for the Black quarterbacks who are coined the “Franchise.”

You’re carrying a franchise and race on your back. They’re dealing with the same struggles that every black man in position of leadership has to deal with on a daily basis. People are always looking for something to deem you unqualified for leadership.

Trust me, I work in the school system. It’s real. Your decision making is questioned at every turn. You’re too mean or too this or too that. There’s always something.

I couldn’t imagine having to lead an NFL team and having to deal with criticism for just being you.

Black quarterbacks are getting their shot. It’s not the same league that forced Marlin Briscoe, the first black quarterback to start an NFL game, to switch positions after throwing for 14 touchdowns as a rookie.

Cam Newton just led his team to a Super Bowl appearance. Jameis Winston has the potential to win multiple Super Bowls. And Russell Wilson has already won one.

One thing is still clear: When it comes to being an NFL franchise quarterback, you’d rather be white.