The Influx Of Talent And Eventually Titles From The West To The East Is Simply Repeating History (via Sportsjourney.com) 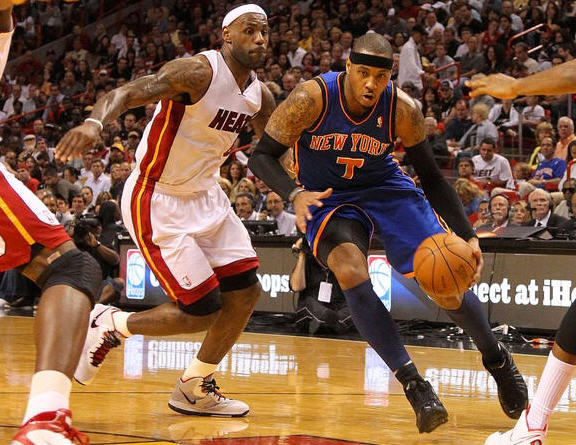 Before the NBA trade deadline struck midnight on Thursday afternoon, major trades from the Western Conference teams to the Atlantic Coast turned the once junior varsity Eastern Conference into a complete juggernaut.  Starting with the expected trade of forward Carmelo Anthony from the Denver Nuggets to the New York Knicks; followed by the shipping of guard Deron Williams from the Utah Jazz to the New Jersey Nets.   Other transactions happened, however, after the moves made during the off-season of the Chicago Bulls adding forward Carlos Boozer via sign-and-trade with the Jazz, guard/forward LeBron James taking his talents to Palm Beach to join with guard Dwyane Wade and forward Chris Bosh and forward Amar’e Stoudemire signing with the Knicks.  The power shift from the West to the East is just repeating history, which will eventually translate into titles.

Dating back to the late-1940’s, the Minneapolis Lakers (now the Los Angeles Lakers) had the first dynasty in the NBA which spanned into the mid-1950’s.  The power shifted to the East when the Boston Celtics were dominant from the mid-1950’s to the 1970’s, where it slightly continued with the Knicks before the power slowly went back to the West after the Portland Trailblazers and the Seattle Supersonic (now Oklahoma City Thunder) won their NBA Titles.

The Washington Bullets and Philadelphia 76ers managed to win their titles and Hall of Fame Larry Bird and his Celtics helped keep the east relevant.  Ultimately the Western Conference power was owned through “Showtime” via Magic Johnson and the Lakers in the 80’s.  After the Detroit Pistons stepped in and took the power from the West, the Chicago Bulls, led by his “Airness” Hall of Famer Michael Jordan, finished off the 90’s.  When center Shaquille O’Neal (now with the Celtics) went to the Lakers and eventually added guard Kobe Bryant through via draft-and-trade, the West regained the power once again, along with the San Antonio Spurs’ assistance throughout the 2000 decade.

Each coastal swing had a dominating period that spanned an average of 12 years before  slowly transitioning to the other shore.  Of course, there were several teams that created a buzz and snatched a title or two during coastal domination like the Celtics (1981, 1984, 1986, and 2008), Houston Rockets (1995 and 1996), Pistons (2003), and the Heat (2006).  But the power shift from the Western Conference to the Eastern Conference shouldn’t be such of a surprise because, according to history, it’s bound to happen.  The other three major sport leagues experienced the NBA’s pattern of dominating conferences for a period of time, as well.

Sports history of the NBA is simply repeating itself and although the Lakers are one player away from gaining another dynasty – even though the Thunder and the Spurs may have something to say about that – the Eastern Conference is due to take back the dominating reigns of the NBA.  The actions from the trade happy franchises on Feb. 27 was the start of the power shift and whether the consistency of the Larry O’Brien Trophy being lifted up by Eastern Conference teams on a yearly bases begins this season, next year or three seasons from now, the East will have their say and – when the east is in the house, oh my God, danger.