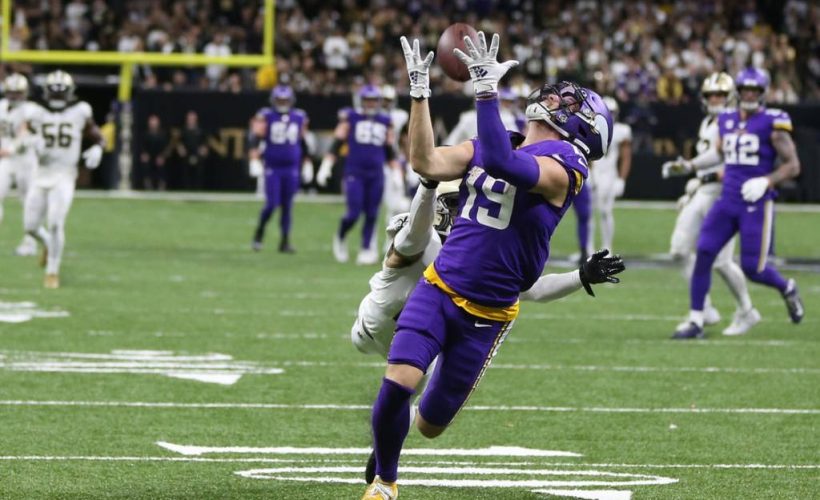 In a wild weekend filled with drama, Wildcard Weekend lived up to its billing. Best part of all, a couple of NFL Regional Combine pioneers performed in the clutch.

The Minnesota Vikings entered the tough environment of the Mercedes-Benz Superdome as the sixth seed to face the New Orleans Saints, who was seeded third. The back and forth affair had no room for error and it was physical up front in the trenches.

Ham was like a human battering ram as he paved holes for running back Dalvin Cook. Ham was instrumental in Cook’s second score of the day.

On second-and-goal from the Saints’ 1-yard line with 3:30 remaining in the first half, Vikings quarterback Kirk Cousins took the ball from under center and handed off to Cook. Ham burst from the backfield and sealed the edge as he took out Saints linebacker A.J. Klein. Cook hit the hole quickly for the score.

Ham also carried the ball once for three yards to pick up a first down.

In the midst of the competitive matchup, where every play was contested, Vikings wide receiver Adam Thielen appeared to not be fazed.

After being in and out of the Vikings’ line up during the mid and latter part of the regular season due to a hamstring injury, Thielen was 100 percent on fire.

Thielen was targeted nine times and came through on seven of those attempts. Despite a lost fumble on the Vikings’ first possession, Thielen, who passed through the RC process in 2013, hauled in huge passes for big gains of 19, 13 and 34 yards – the 13 and 34 yarders were on third down attempts.

Clearly, Thielen’s most important conversion of the game, one of his biggest for his career, came in overtime.

With 12:42 left in extended play, the Vikings faced first-and-10 from the Saints’ 45-yard line. Cousins took the ball from under center, faked the hand off to Cook and threw deep down the field to Thielen.

Thielen beat the coverage of Saints cornerback Patrick Robinson as he went inside and separated from him deep to stretch out for the ball. Thielen landed on the Saints’ 5-yard line to set the Vikings up for the eventual score.

“We knew we had to be almost perfect…There’s no one that’s more proud than this team as how guys fight and have each other’s back, and keep working,” echoed Thielen.

Thielen had a lot of praise for his quarterback who is constantly criticized for not performing on a high level in big games.

“I’m so happy for him (Cousins), it’s such a blessing again to be able to play with him,” voiced Thielen after the game with Westwood One. “HIs leadership, his love for Christ. The way that he approach the game every single week and the type of teammate he is.

“He’s the first person to have my back when I made a bad play,” he continued. “He gave me the rock and trusted me to keep making plays.

“We won the game because of him and this defense.”

Thielen led the Vikings in receptions and receiving yards with 129. After missing sometime from the line up, Thielen is back, healthy and this man of faith salutes his influences, including Christ.

“You know, as an athletic and a competitor, when you have a bad play, all you want is another opportunity to make a play and to prove that was a fluke,” stated Thielen. “I’m thankful for my coaches and teammates for trusting me to go out there and be the type of player that I am.

The Combine Report: NFL Divisional Round - All Hands On Deck Next post