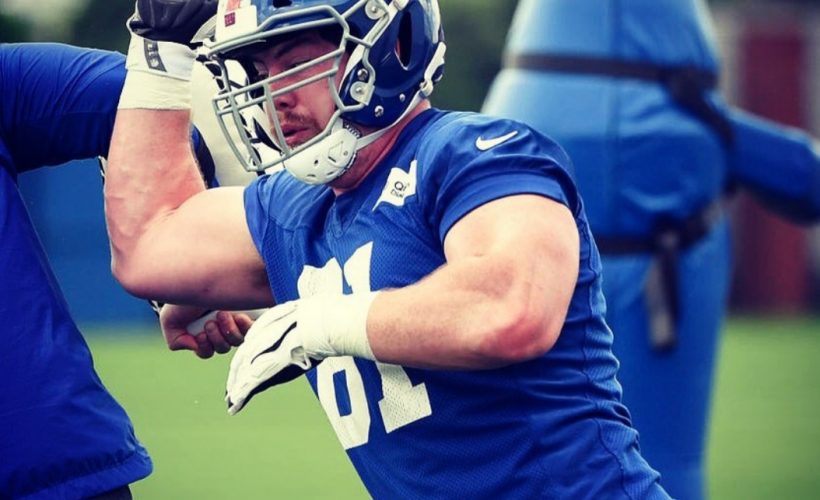 The Combine Report: Why Thurman, Ceresna’s Skill Set Will Translate From The CFL To The NFL

Jameer Thurman and Jake Ceresna have traveled from the NFL Regional Combine platform to the Canadian Football League (CFL) to finally getting to the NFL. Most likely, their transition to the NFL will sustain until they ultimately retire.

When Thurman ventured through the process in 2017, it was evident that he would sign with an NFL club because of his natural love to play on special teams. He was never a look-at-me type of player, but was always viewed as the complete team player.

Following a solid workout session at the Minnesota-held NFL Regional Combine in 2017, and eight workouts later with NFL clubs, Thurman used his skill set as a special teams’ ace for the Calgary Stampeders of the CFL and eventually made a name for himself on the defensive unit as a starter at the weak-side linebacker position.

Thurman amassed 82 tackles and hoist the Grey Cup as a champion last season. The Stampeders released Thurman in January so he could pursue the NFL.

The Bears demonstrated a strong interest in the Chicago native.

“They (the Bears) contacted me throughout the course of all the workouts,” said Thurman, according to chicagobears.com. “When it came down to it, I had a pretty good relationship with (the Bears). It was nice. They were aggressive with me the whole time. To have a team checking in on me throughout meant a lot to me.”

The Bears are deep on the defensive line positions, however, another quality linebacker can help. In the CFL, Thurman demonstrated leadership and tenacity on the field. His overall excellence on the field will translate easily to the NFL and learning from the Bears’ veterans will only make Thurman better on the highest level.

To best description for Ceresna is that of a grinder. He attended the Baltimore-held RC trials in 2016 and showcased great movement for his size at 6-5, 300-pounds, decent speed and ball skills. Ceresna did not find success right away like Thurman as he had to develop more into a professional talent.

A year later, Ceresna participated in the 2017 NFL Pro Player Combine and was much sharper compared to his RC trial. Ceresna signed with the Ottawa Redblacks shortly after and wrapped up his CFL playing experience as a member of the Edmonton Eskimos.

Ceresna can get to the quarterback and he has the eight sacks from a year ago to show for it. The New York Giants signed him to a reserve/futures contract in January, and now, it’s Ceresna’s time.

“Jake has all the tangibles as far as what the NFL is looking for as far as height, size, athleticism. He’s just an explosive good, big, young man,” stated Eskimos defensive line coach Demetrious Maxie, according to bigblueviewcom. “When you get a young man like Jake — 6-5, 300 pounds that can run you’ve got the best of both worlds. You need a defensive lineman that can run to the ball and get to the ball and make things happen.”

“I believe he’s going to be a great asset for the Giants. They did a good job giving that young man an opportunity,” he continued. “I’m sad that I don’t have him, but I’m proud that he’s given that opportunity.

Ceresna’s workhorse mentality is perfect for any NFL team, and the Giants need more of a presence within their defensive front. Ceresna can improve some of the deficiencies as the Giants finished 24th in total defense last season.

If Thurman and Ceresna make the roster of their respective teams, they will be the first players from the RC platform to transition from the CFL to NFL.

This is the moment Thurman and Ceresna have been waiting for – a legitimate chance to make an NFL roster. Both players proved they can perform on a high level, and after a rocky start to professional football, they are ready for this occasion.

And their time is now.

The Combine Report: Which RC Talents From The AFC Will Win The Super Bowl LIV Previous post

The Combine Report: Thielen Selected By His Peers Once Again Next post