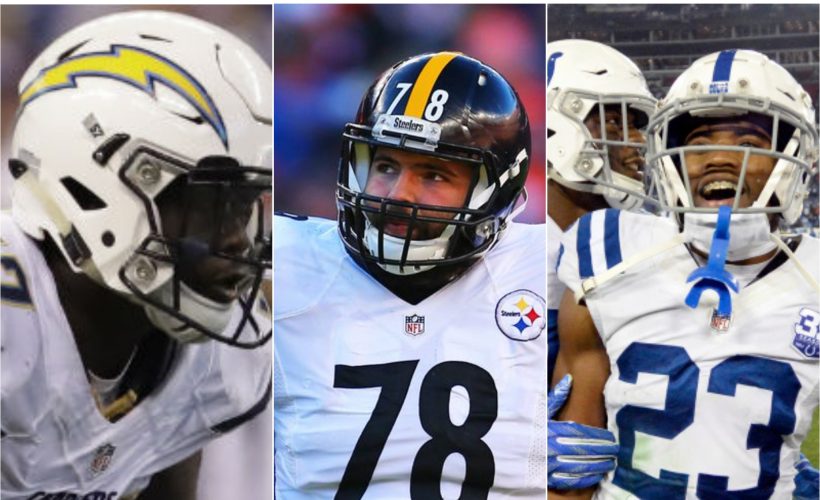 The Combine Report: Which RC Talents From The AFC Will Win The Super Bowl LIV

The talent pool in the AFC is deep considering that the juggernaut in New England continues to reign supreme. Still, the games must be played and the AFC will be competitive during the 2019 NFL campaign.

In terms of the NFL Regional Combine platform, several pioneers will play major roles in getting their squad to Miami to face the NFC representative for Vince Lombardi trophy in Super Bowl LIV.

Some of the legitimate AFC contenders have RC standouts currently playing at a high level, while a few are preparing for the next wave of talent to hit the field. The annual NFL discovery stage never has been this rich in excellence on the field and this season will be a coming out party for some, while others will be household namers soon.

Offensive line Austin Reiter has been waiting for this opportunity since he was a seventh-round selection of the Washington Redskins in 2015 – being a full-time starter in the NFL. Prior to signing with the Chiefs, Reiter played for the Redskins and the Cleveland Browns. Last season, Reiter had to fill in for center Mitch Morse on the high-powered Chiefs offense.

Reiter was impressive enough for the Chiefs to allow Morse to walk out the door. Now, Reiter will play a major roll for the Super Bowl contending Chiefs and he is ready for this moment.

Understanding that the Chiefs need to be productive against the run, but still need to get to the quarterback, they also may have a quiet storm in rookie defensive end Tim Ward.

The Steelers are one of the NFL teams that find value in the NFL Regional Combine platform as they garner effective pieces who help them stay in the hunt for a championship. And two-time Pro Bowl left tackle Alejandro Villanueva is paving the way for the Steelers, and the RC.

Villanueva converted from a couple positions before finding his destiny on the offensive line protecting future Hall of Fame quarterback Ben Roethlisberger. For the Steelers, everything starts up front with the line. If the O-line can keep Roethlisberger upright as the young receivers develop, and consistently clear paths for James Connor, the Steelers will be competing in late January. And Villanueva will be at the forefront.

Punter Jordan Berry has helped the Steelers’ defense win the battle of field positioning on many outcomes. Berry finished 10th in the league for landing punts into the 20 with 28. Having a solid punter is a weapon and the Steelers have one in Berry.

Defensive back Jordan Dangerfield is entering his fifth year with the Steelers and he has been the healthiest he has ever been. He played well last season as he earned his first start since 2016. This year, the Steelers will be pulling on him more.

In relation to being pulled on, tight end Christian Scotland-Williamson may be a new weapon in the Steelers’ arsenal. Scotland-Williamson came through the NFL International Player Pathway program last year and spend all of the 2018 NFL season on the practice squad, which is mandated by the program for the selected foreign-born athletes to be on an assigned team. The following season, the participant of the IPP will have to earn a spot, and not only will Scotland-Williamson achieve that goal, he will be a factor with his athleticism, ball skills and uncanny speed for his 6-9, 273-pound frame.

Rookies defensive tackle Fred Jones and defensive back Alexander Myres will be given an opportunity to make the roster and from there, the sky’s the limit as their skill set fits the Steel Curtain’s standards.

Without question, the AFC West will be competitive this season, probably the most stacked division in the NFL due to several offensive pieces acquired this season among the teams. Nevertheless, the Chargers have the defense to make the stops and win now, especially with linebacker Jatavis Brown quarterbacking the defense.

Brown has been a top defender since day one when he was drafted by the Chargers in the fifth round in the 2016 NFL Draft. Recognizing what offenses are planning to execute during pre-snap will be key for this defense that is always on an adrenaline rush to stop anything that moves. Brown has the tools and respect from his talented teammates to lead them deeper into the playoffs.

Defensive back Jeff Richards finally earned a taste of the NFL and after six solid games, he is ready to be a part of something special in Los Angeles.

Defensive end Patrick Afriyie spent his rookie season last year on the practice squad. After witnessing what it takes to be a Charger, Afriyie is looking to be an active participant in this high voltage defense.

Like the defense, the Chargers are deep at the wide receiver position. Still, they may have the AFC’s best kept secret in Justice Liggins. Liggins is a playmaking machine waiting to be turned on. He has been impressive since being with the Chargers, and this season, Liggins may be a dangerous number three.

The Colts are good, really good. With a balanced offensive attack and defensive playmakers, the Colts are prepared to go to the next level. Cornerback Kenny Moore II is one of the Colts cornerstone players and his contract extension is proof.

Moore II has became a solid, next-level defender who is savvy, quick and aggressive. This will be a Pro Bowl year for the Division-II product from the Valdosta State.

While Moore II impacts the defensive unit, defensive back Chris Milton will spearhead special teams to make the Colts complete on all three phases.

The Texans are perhaps the best darkhorse in the AFC, and they have some NFL Regional Combine pioneers who could make their mark this season and beyond.

Leading the way for the platform is none other than wide receiver Vyncint Smith. After learning the game and what it takes to be successful at this level, Smith is hungry and desires to become a reliable target for quarterback Deshaun Watson. Smith came through for the Texans in a huge game against the Philadelphia Eagles in Week 16 when he nearly sealed the deal late in the game before the previous Super Bowl champs mounted a comeback.

Texans head coach Bill O’Brien vested time in Smith and this season it will payoff for the team and him.

Linebacker Tyrell Adams may have finally found a home, and with some of the movement around the defensive line, Adams will get his opportunity.

Among the rookies, remember these two players – wide receiver Tyron Johnson and safety Chris Johnson. They will shock the division, and eventually the conference. They are legit.

NFL Combine Report: Which RC Standouts Will Impact Their NFC Squads' Chances In Getting To The Super Bowl? Previous post

The Combine Report: Why Thurman, Ceresna's Skill Set Will Translate From The CFL To The NFL Next post