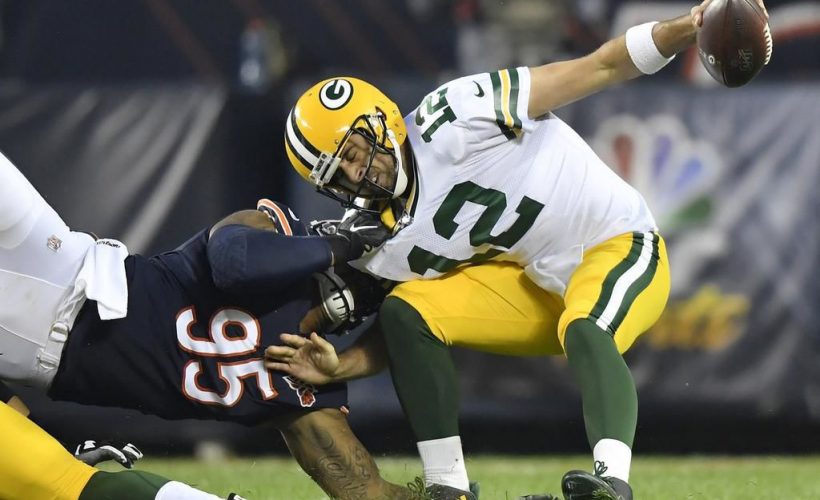 The Combine Report: Week One – Robertson-Harris, Dunbar In Attack Mode

Robertson-Harris Got The First Sack Of The Season, Thielen Bullied For TD

In terms of the NFL Regional Combine platform for Week One of the NFL, defense was at the forefront.

ROBERTSON-HARRIS GETS TO RODGERS – AGAIN

When the Chicago Bears hosted the Green Bay Packers, it was evident that the present day Monsters of the Midway generated energy of the past. And at front and center, Bears defensive end Roy Robertson-Harris was not going to let any offensive linemen stop him from getting at Packers quarterback Aaron Rodgers.

On the Packers’ opening drive, they faced a third-and-10 from their 25-yard line. Rodgers took the ball from shotgun formation. Robertson-Harris bull-rushed Packers guard Lane Taylor with one hand into the ground.

Rodgers was trying to get away, but Robertson-Harris lunged off the ground, grabbed Rodgers with his right hand and slammed him to the ground for the first sack of the 2019 NFL campaign.

Robertson-Harris got to Rodgers last season in Week One and nearly ended the future Hall or Famer’s season on a sack. The NFL Regional Combine pioneer truly has a thing for Rodgers because he loves bringing him down hard.

To close out the game, Robertson-Harris helped finish off Rodgers later in the contest and ended the season opener with three tackles, including the sack.

In that contest, Packers wide receiver Trevor Davis and tight end Robert Tonyan both had a reception for 28 yards.

Dunbar was all over the field as he finished with nine tackles to lead the Redskins. The fiery defensive back never backed down from an opponent as Eagles wide receiver DeSean Jackson got into an exchange midway into the first quarter.

When Dunbar left the game in the third quarter due to a minor leg injury, the Eagles went deep often.

The Combine Report: Week 2 Preview - Can Alex McGough Be Texans' Taysom Hill? Will Thielen Continue To Haunt Packers? Next post