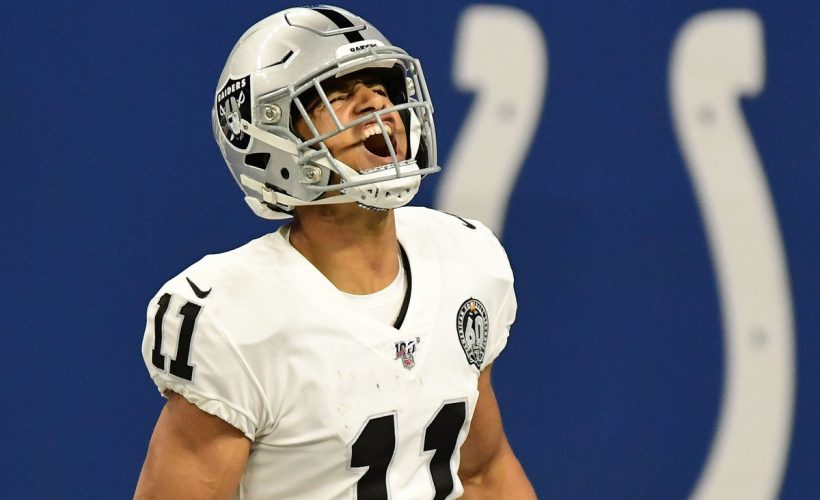 Week Four of the NFL was lit with tons of excitement, especially from the once unknown talents who journeyed through NFL Regional Combine process.

DAVIS TO THE HOUSE FOR RAIDER NATION

Opportunists are normally reflected in a negative light as someone who looked to gain an immediate advantage over another person or situation at one’s expense.

In the National Football League, opportunists are encouraged – just like wide receiver Trevor Davis. Davis signed with the Oakland Raiders after being released by the Green Bay Packers before Week Four. Along with wide receiver J.J. Nelson, Davis is one of the fastest Raiders on the team.

Davis was utilized in practice like Nelson. So, when Nelson was not ready to go against the Indianapolis Colts, Davis seized the opportunity and took off – literally.

With 8:13 left in the first quarter, the Raiders faced first-and-10 from their 40-yard line. Davis was lined up to the right and took a hand-off from Raiders quarterback Derek Carr for a jet sweep up the left side of the field. With some good blocking, Davis turned on the jets for a 60-yard touchdown run.

“That was great downfield blocking,” said Davis following the game, according to Raiders.com. “I saw there was one safety left, so I didn’t want him to tackle me with all those blockers. They’re great blockers, too. Our tight ends are great blockers, really our whole team is. I knew after I saw that it was most likely a touchdown.”

That particular scoring play was originally designed for Nelson, however, unavailability equals opportunity in the NFL.

“It (the play) was for J.J. Nelson honestly and J.J. was a scratch,” said Raiders head coach Jon Gruden. “He (Nelson) showed up here today and couldn’t go. “Very disappointed in that, but the kid (Davis) came in there and not only scored the touchdown today, but he made some plays for us that didn’t show up on the stat sheet.”

For as much as opportunities are allotted in the NFL, it is rare that the right type of talent is available to take advantage of a situation. The Raiders are all about speed as Gruden wants to go fast. Davis fits the Raiders’ make up. The opportunity came for the signing. An opportunity presented itself to Davis in Week Four. And now, his opportunity may create expectations.

“It always has been, it really comes down to opportunity in this league, and at the end of the day if you’re given that opportunity you have to take advantage of it,” voiced Davis. “So, even if it’s backing up any receivers, if it’s starting it doesn’t matter what my role is. I’m going to just help the team win, at the end of the day that’s all I really care about. So, whatever they put me in is what I’m going to do.”

Davis finished the contest with two carries for 74 yards and had a couple returns. The last time Davis, who ventured through the NFL Regional Combine platform in 2016, scored a touchdown was his rookie season when he caught a nine yard pass from Packers quarterback Aaron Rodgers against the Atlanta Falcons.

REITER PUSHED AHEAD FOR THE GO-AHEAD WIN

In a back and forth matchup between the Kansas City Chiefs and Detroit Lions, it came down to who wanted it more. Several of the RC offensive linemen pioneers are doing well in the league, but Chiefs center Austin Reiter truly pushed full steam ahead – literally.

Due to uncharacteristic play from the Chiefs, they needed every possible touchdown imaginable.

With :23 seconds left in regulation, the Chiefs faced second-and-goal from the Lions’ one-yard line. Chiefs running back Darrel Williams took the ball up the middle, got stuffed and hit behind the legs by Lions nose tackle A’Shawn Robinson. As soon as Williams was falling backward, Reiter hit him in his back and pushed Williams forward for the go-ahead touchdown.

“Austin pushed the (spit) out of him,” said Chiefs guard Laurent Duvernay-Tardif.”

Reiter has been great for the Chiefs as he is an extra set of eyes and leader for quarterback Patrick Mahomes. For the most part, Reiter has helped to keep defenders’ hands off Mahomes. For Williams, Reiter made sure he put his hands on him.

“I told him after, ‘I owe you a case of beer for hitting you in the back,’” said Reiter.

In the same contest, Lions wide receiver Marvin Hall played well as he finished with two receptions for 47 yards, including a huge play with 3:19 left in the game when he caught a 34-yard pass which set up the next touchdown that could have won the game for the Lions.

A MONSTER OF THE MIDWAY

Chicago Bears defensive end Roy Robertson-Harris has started this season off strong. The Bears have an elite defense and Robertson-Harris is not just along for the ride, he is one of the drivers.

Against the Minnesota Vikings, Robertson-Harris tormented quarterback Kirk Cousin throughout the entire game. With 10:36 left in the first half, from the Vikings’ 21-yard line, Cousin took the ball from center. Robertson-Harris fired off the snap, side stepped Vikings guard Pat Elflein and blew pass him. Robertson-Harris ran down Cousins for a 10-yard loss on the sack.

In the third quarter, Robertson-Harris got his hands on Cousins again with 8:34 left. Bears linebacker Khalil Mack put pressure on Cousins from the edge. When Cousins was trying to get away from Mack, Robertson-Harris, the RC legend, finished him off for a seven-yard loss.

Along with Robertson-Harris, defensive tackle Abdullah Anderson got his first NFL tackle, which came in the first quarter with 4:19 left.

For the Vikings, fullback C.J. Ham had three receptions for 10 yards