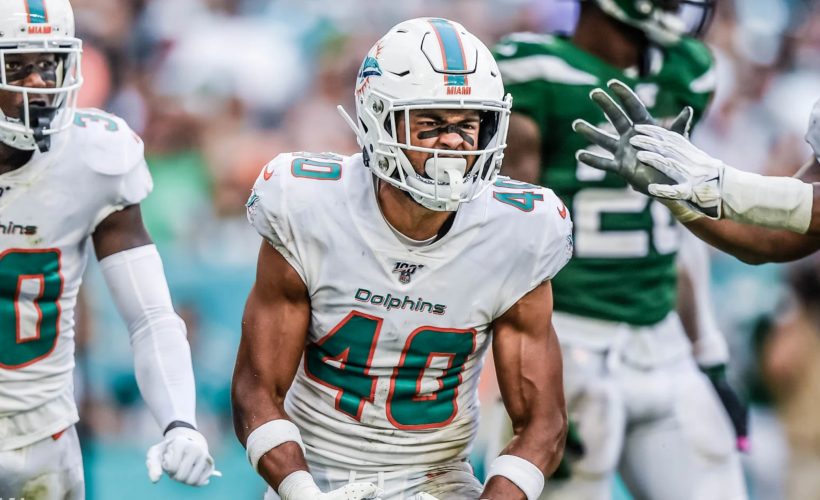 The Combine Report: Week 9 Review – In The Nik Of Time For Dolphins, Smith Turned Up Jets For A Moment, Moore II Was Savage

Week Nine of the NFL produced a combination of savages and break out plays from the NFL Regional Combine pioneers.

IN THE NIK OF TIME

For the first couple of weeks, the Miami Dolphins laid down for their opponents. Shorty after, they started swinging blows only to get knocked out in the end. All the Dolphins needed was to outlast their combatants, but they needed that counter shot to count.

And rookie cornerback Nik Needham was the punch that came through at the right time against the New York Jets.

Needham was aggressive all afternoon. For the majority of the contest, Needham played press coverage, not giving up the inside to receivers. The RC pioneer led the Dolphins in tackles with nine, including a devastating sack on Jets quarterback Sam Darnold.

In the fourth quarter with 11:02 remaining, the Jets still had a chance to steal the game. On the Jets’ 15-yard line faced a second-and-15, Darnold received the ball from shotgun.

Needham was lined up on the edge to his left. When the ball was snapped, he teed off the line, ran full speed and annihilated Darnold as the Jets’ signal caller never saw Needham coming.

During the course of the game, Needham lined up against the Jets wide receiver Vyncint Smith. Smith caught a 17-yard pass midway through the second quarter, but was brought back due to a penalty.

In the fourth quarter with :45 second left in regulation, he hauled in a big 20-yard pass that put the Jets on the Dolphins’ 16-yard line before running out of bounds.

However, Smith’s biggest play of the game came via kickoff .

In the first half with 1:21 left, Smith received the ball inside the five-yard line. The speedster from Limestone College took off, sprinted up through the crowd, bounced off a tackle and turned the jets on down the field.

Smith got past all the Dolphins’ defenders, but due to a diving effort by defensive back Steven Parker, he was able to push Smith out of bounds at the Dolphins’ 18-yard line. A solid outing by Smith.

To accompany Smith on the Jets, linebacker Brandon Copeland was a madman as he led the team in tackles with eight, including his first sack of the season. After servicing a four-game suspension, Copeland’s outing was his best thus far of the season.

Copeland definitely brings an element of aggression to the Jets’ defense. Soon, it will translate into more wins, along with rookie defensive end Kyle Phillips who finished with three tackles.

When Indianapolis Colts quarterback Jacoby Brissett went down to a MCL injury against the Pittsburgh Steelers, all hands were needed on deck. Led by Colts cornerback Kenny Moore II, everyone was plugged in.

With 12:33 on the clock, the Steelers faced third-and-13 from the Colts’ 49-yard line, Steelers quarterback Mason Rudolph received the ball from shotgun. Rudolph threw deep left of the field to wide receiver Juju Smith-Schuster. The ball bounced off his hands and into the grasp of sure-handed Moore II.

Moore II sprinted up the field near the side line and weaved his way for a 35-yard return, which ultimately led to the Colts’ first points of the game. Moore II allowed only 19 yards during his coverage.

The Combine Report: Week 10 Preview - Who Will Come Through In Battle Of Field Positioning In The Steel City, Berry Or Hekker? Next post