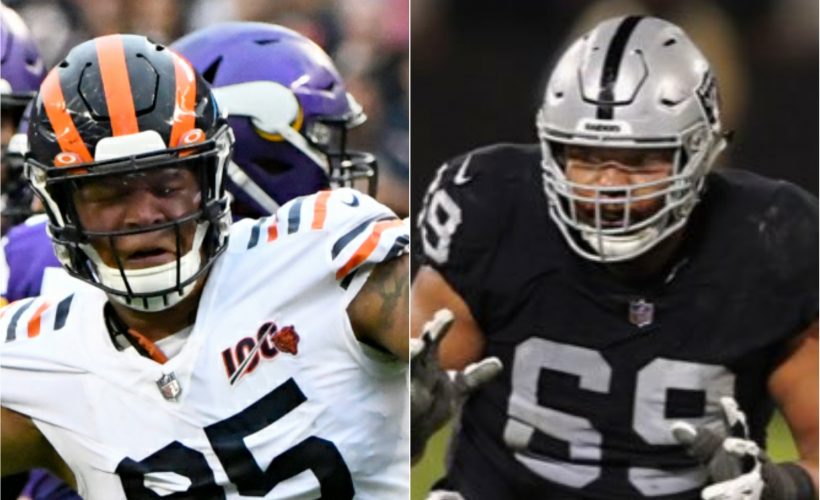 The Combine Report: Week 5 Preview – Who Will Be The Sack-Factor In London, Robertson-Harris Or Mayowa? Good Ready For Challenge.

Can Holcomb And Dunbar Slow Down The Patriots?

The first quarter of the 2019 NFL season is in the history books and the second quarter of the campaign will promise to be just as thrilling. Week Five is here. Let the drama continue with the NFL Regional Combine pioneers in the forefront.

The football world is looking forward to this matchup as Chicago Bears linebacker Khalil Mack look to terrorize the Oakland Raiders for the way the Black and Silver organization exited the All-Pro defender. Clearly, from that perspective, this is a revenge game.

The Raiders will rightfully game plan for Mack, but they must keep a third eye on defensive end Roy Robertson-Harris who either will get to the quarterback or be disruptive.

Robertson-Harris is third on the Bears in sacks with 2.5, and has nine tackles, however, the RC pioneer and three NFL veteran is impactful on nearly each defensive snap he is involved with. Robertson-Harris’ specializes in bring tremendous pressure from up the middle, while Mack and defensive tackle Nick Williams feeds off quarterbacks and ball carriers.

Now, standing across Robertson-Harris is another RC pioneer in Raiders tackle Denzelle Good. Good is not a household name. Still, this is a type of game that can get him started toward that status.

Good is strong and athletic. The Raiders will need his skill set like never before. Along with Robertson-Harris to contend with, Good will have to deal with a quiet talent who journeyed through the same RC process in Bears defensive tackle Abdullah Anderson.

Anderson earned his first NFL tackle in Week Four, and many, many more will follow. Other than London’s food, Good will look to hold that streak off as he is ready for that challenge.

Mayowa is quietly one of the top sack masters in the NFL as he is tied ninth in the league with 3.5. Mayowa is having a solid season with seven tackles, including two forced fumbles.

Bears quarterback Chase Daniels will get the start as Mitch Trubisky recovers from a left shoulder injury. Daniels is mobile, but does not have the wheels like Trubisky.

Mayowa will have his opportunities to affect this matchup.

In the trenches, the showdown will be determined. Nevertheless, the Raiders have a big play waiting to happen in wide receiver Trevor Davis. In his debut during Week Four, Davis took a 60-yard run to the house. Without question, the Raiders will look to take advantage of Davis’ skill set – on purpose.

NFL Caretakers: The Best Behind The Whistles - First Half Previous post