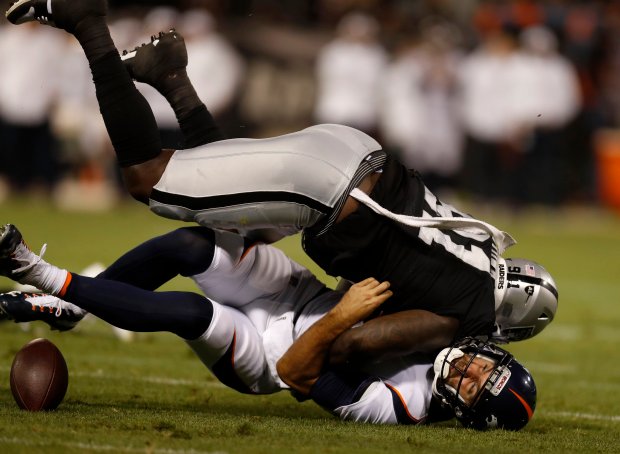 The Combine Report: Week 4 Preview – Will Mayowa Terrorize The Colts?

After three weeks of the NFL season, the NFL Regional Combine pioneers are getting warmed up. Featuring Week Four of the NFL campaign, one standout is catching fire – in Oakland.

Raiders defensive end Benson Mayowa rejoined the squad after stints with the Dallas Cowboys and Arizona Cardinals. Mayowa paired up with several elite pass rushers during time with the likes of DaMarcus Lawrence (Cowboys) and Chandler Jones (Cardinals).

With his return to Oakland and gained experience, Mayowa is licking his chops to showcase his leadership potential as a pass rushing machine.

Which is something the Raiders need, a legitimate pass rushing attack.

Last season, the Raiders had only 13 sacks. That number 13 is definitely sickening to Mayowa.

“I don’t want to hear about 13 no more,” stated Mayowa as he said referenced the number of sacks a year ago following the Raiders win over the Denver Broncos in Week One. “We got three. All we need is 10 more, and that’s three in one game, so we just have to keep stacking. Next time we get four. Next time we get five. We did a good job today, and we just have to keep stopping the run, so we can get into passing situations, and every passing situation we get in, that’s how we get sacks. That’s what we’re looking forward to.”

Mayowa became the first Raider with multiple sacks in a contest since former Raider, now Chicago Bears All-Pro linebacker Khalil Mack, had two against the Broncos in 2017.

Mayowa, who journeyed through the RC in 2013, has seven tackles, including 3.5 sacks and two forced fumbles. he is currently tied for sixth in sacks. The 6-3, 265-pound defensive end is putting his best foot forward this go around with the Raiders. In Mayowa’s first stint with the Raiders, he was the newcomer. Now, he is the wildly veteran leading the Silver and Black.

Against the Indianapolis Colts, Mayowa will look to get back on track with sacks after not getting his hands on Minnesota Vikings quarterback Kirk Cousins last week. The Colts are 16th in the NFL in sacks allowed, as the Raiders are getting better at pressuring the quarterback

Sack or no sack, Mayowa is taking one play at a time for ultimate team success. But getting to the quarterback is key.

“We say, we get the first one, and then they start coming in bunches,” Mayowa explained. “We got our first one, and we don’t need to sack chase, we just need to go in there, stop the run, so we can rush the passer.”

LockerTalk Podcast: O.U.T. Listers’ Linebackers To Watch For In 2020 Next post