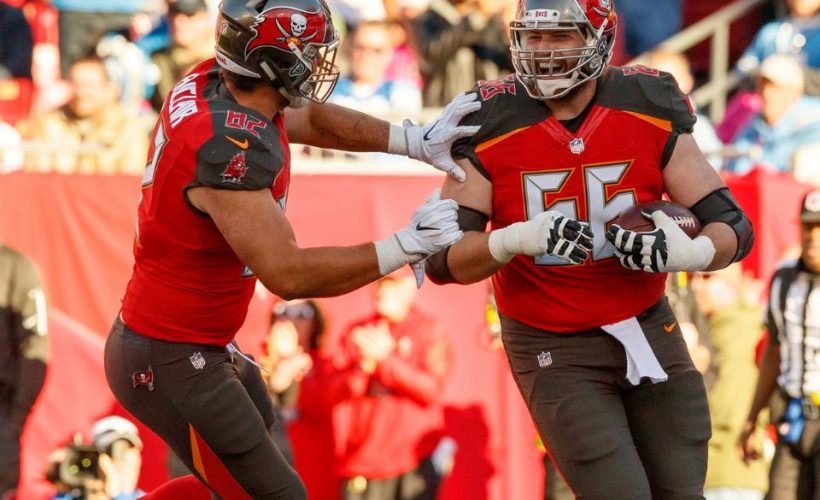 The Combine Report: Week 14 – Wester Scores, RC Players Made Plays Down The Stretch

The NFL playoff push is in full swing, and teams are not backing down. Fortunately, 27 out of 32 teams in the NFL have at least one representative from the NFL Regional Combine on their roster because clubs need fighters. And that is what RC pioneers are – fighters.

The Tampa Bay Buccaneers were down 14 points entering the fourth quarter, but they closed the gap with a 2-yard touchdown reception from rookie tight end O.J. Howard. Still, they needed more.

After marching the ball down the field, the Bucs decided to do some trickery.

With 8:10 remaining, the Bucs faced first-and-goal from the Detroit Lions’ 2-yard line. Offensive guard Leonard Wester was reported eligible. Bucs quarterback Jameis Winston took the ball from center and threw a short pass towards his left to Wester, who came off the line clean. The Lions were not expecting the execution, so Wester was wide open with no defender in sight as he caught his first career NFL touchdown. 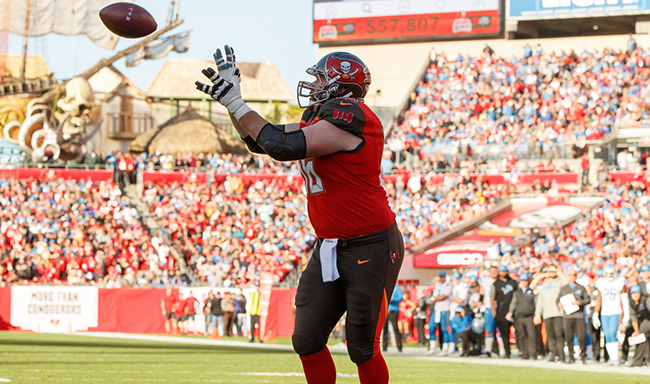 “Last time I caught a pass? I’ve never actually caught a pass,” said Wester, who attended the New-Orleans-held RC trials in 2016. “The last time I touched the ball was eighth grade, when I played quarterback. It means a lot more in a win, but I’m thankful for the opportunity.”

Winston was a happy for his big man.

“It’s always good to get a big man in the end zone,” Winston voiced. “That was one of the few fun things about today’s game. … That put a smile on my face. I’m happy Leonard Wester got himself a touchdown. You should have seen the look on the faces of those offensive linemen.”

Arizona Cardinals running back Elijhaa Penny continues to demonstrate his worth with two carries for 11 yards, a reception for 18 yards and a tackle.

Another player who was all over the place was Mike Thomas as he put in a showing for the Los Angeles Rams. Thomas had his second catch of the season as he hauled in a pass for six yards, but he made his presence felt in the third quarter.

With 10:13 left in the third, the Philadelphia Eagles lined for a punt. After the snap, Thomas penetrated the inside when he beat rookie running back Corey Clement, blew past fellow RC linebacker Kamu Grugier-Hill and ran full speed ahead. Thomas blocked the punt, the ball bounced into the hands of defensive back Blake Countess and he walked into the endzone.

Speaking of walking into the endzone, Jacksonville Jaguars rookie wide receiver Keelan Cole did just that.

In a huge game against the hot Seattle Seahawks, Cole led the Jags in receiving yards for the first time in his promising career with 99, off three receptions. 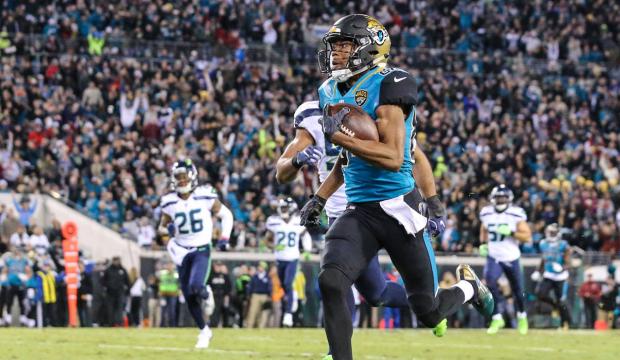 In the third quarter with 7:32 on the clock from the Jaguars’ 25-yard line, Cole was lined up in the slant on the right side. The speedster from Kentucky Wesleyan sprinted untouched to the middle of the field and went deep up the left side of the field with linebacker K.J. Wright trailing him about 10 yards. Cole caught the deep ball pass from quarterback Blake Bortles and Seahawks Pro Bowl safety Earl Thomas could not get to Cole in time to stop him from scoring the 75-yard touchdown reception.

As a matter of fact, Cole could not stop himself as he ran into the tunnel.

Bortles has targeted Cole several times on deep balls this season and they finally connected. Clearly, this hook up will happen again and again.

Wide receiver Adam Thielen continues to excel and is in great company with the best wideouts in the league. Against the Carolina Panthers, and despite suffering a heartbreaking loss, Thielen hauled in a 52-yard touchdown pass. Thielen finished with six catches for 105 yards and is currently tied third in receiving yards (1,161) with Atlanta Falcons All-Pro receiver Julio Jones.

Now last, but not least, let’s give it up for some defensive players. 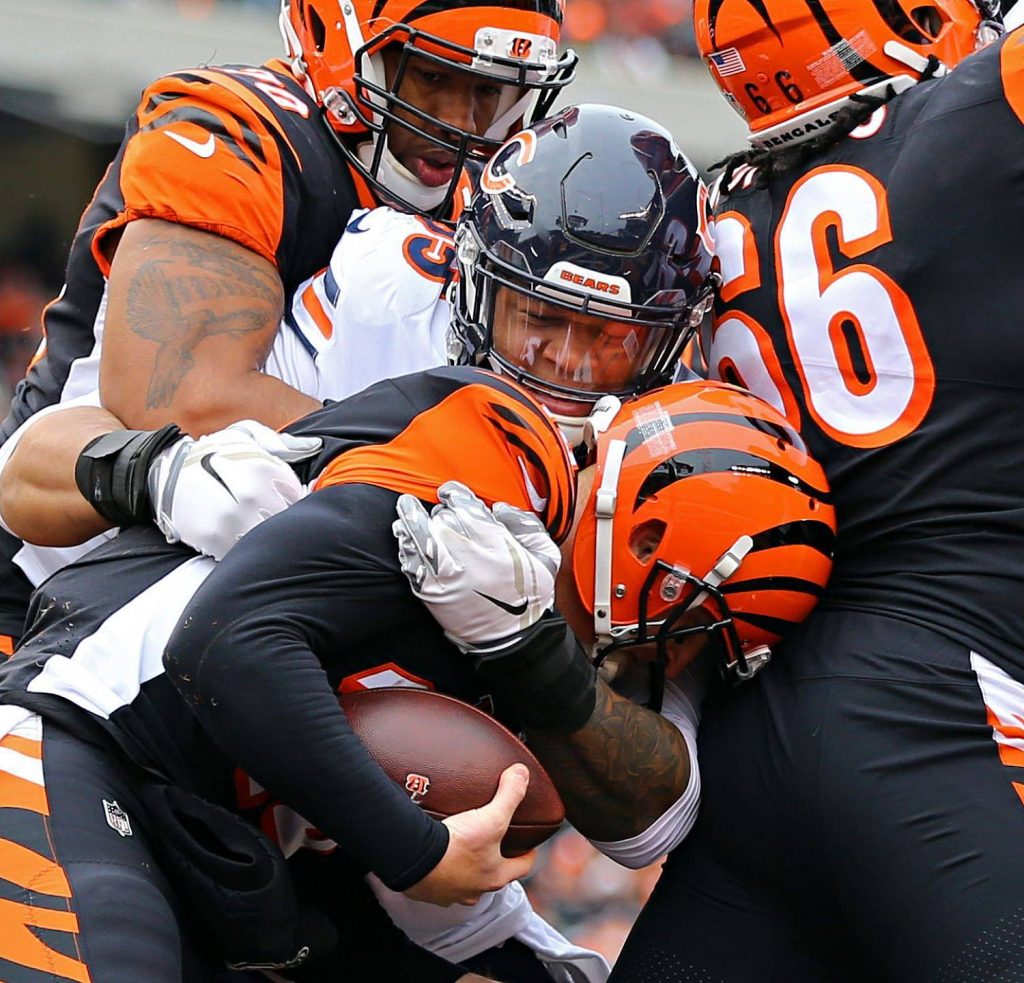 With 1:35 left in the first half against the Cincinnati Bengals from their 7-yard line, Harris fired off the edge and brought Bengals quarterback Andy Dalton to the turf for a five yard loss.

On the first play from scrimmage, Falcons quarterback Matt Ryan took the snap from shotgun and threw a short pass to the right to tight end Austin Hooper and as he was falling to the ground, the ball came out into Banjo’s hands when he landed on top of Hooper.

Banjo ran down the field imitating taking a selfie. The RC pioneer from the 2013 trials committed a huge turnover and a tackle.

The Combine Report: Carter, Pringle, Tonyan Among The 11 Signed To Make The RC 82 Strong In The NFL Previous post