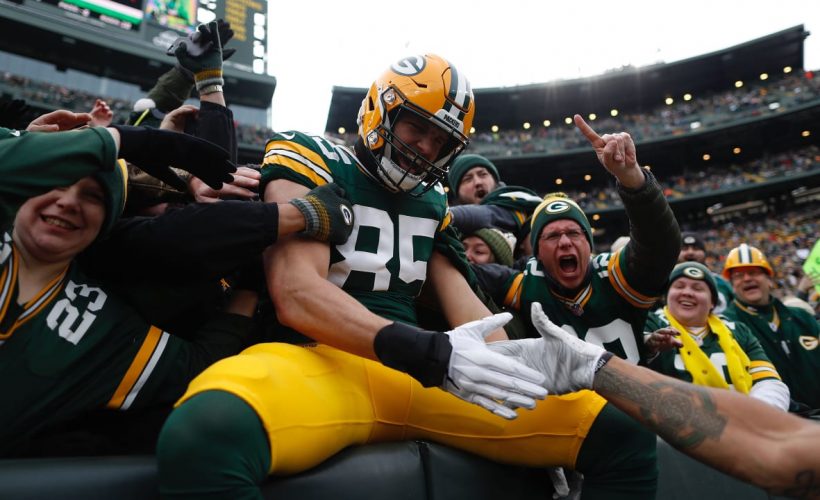 Zylstra Got His First Catch Of The Season

Week 14 of the NFL was nothing short of spectacular. With big plays and explosive outcomes, the little things were just as great with several NFL Regional Combine standouts in control.

Green Bay Packers tight end Robert Tonyan is in an unique situation. He is undrafted and the third option for a Packers’ team that is loaded with two highly decorated tight ends, not to mention a roster full of talented wideouts.

Most undrafted pass catchers would not stand a chance to make that roster.

But Tonyan did as he is “super talented.”

“The guy (Tonyan) is super talented,” stated Packers quarterback Aaron Rodgers earlier this season. “He has incredible hands. I think he has a very bright future in this league. He’s got a great room. Bobby can be a move guy, a fullback, H-back type guy, and give us a lot of flexibility. It’s been fun watching him because he does everything the right way. You can’t help but pull for guys like that.”

Tonyan is not targeted much, with just 10 thus far on the season. However, he normally takes advantage of every opportunity, like he did against the Washington Redskins.

With :39 seconds left in the first quarter, the Packers faced second-and-10 from the Redskins’ 12-yard line. Rodgers received the ball from center and dropped back to throw into the endzone. Tonyan was lined up at the end of the line with his hand in the dirt.

At the snap, Tonyan took off, fake to the outside and quickly got behind the secondary for Rodgers to find him deep in the middle of the endzone for the 12 yard score. That was Tonyan’s second touchdown of his career, but he earned his first ‘Lambo Leap.’

Tonyan, who came through the NFL Regional Combine process in 2017, became the 11th different offensive player to score a touchdown for the Packers this campaign.

Tonyan sustained a minor hip injury sometime during midseason. He is now healthy. Rodgers and staff will surely make Tonyan more involved during the rest of this playoff push – and beyond.

SMITH TURNED UP THE JETS

Similar to Tonyan, New York Jets wide receiver Vyncint Smith does not get targeted as much, but he makes his presence known each time he touch the ball.

In Week Nine, the matchup between Smith and Miami Dolphins rookie cornerback Nik Needham was highlighted for something special to witness.

It finally happened in Week 14

With the game on the line, the Jets were looking at first-and-10 from their 25-yard line. At 1:29 left in regulation, Jets quarterback Sam Darnold was lined up in shotgun formation.

RC pioneers in Needham and Smith were lined up against each other. Needham was in press coverage, but when Darnold received the ball from snap, Needham blitzed from the corner position.

Needham already batted one of Darnold’s balls, which came earlier in the quarter with 9:32 left, ultimately forcing the Jets to punt.

Smith caught a quick toss at the Jets’ 27-yard line and jetted up the sideline for a 37-yard gain, which placed them into field goal range.

If it was not for Dolphins linebacker Jerome Baker, Smith would have scored.

“I didn’t know he (Needham) was blitzing,” said Smith. “I reacted off of him and skipped off. Sam threw a perfect ball in there and I just ran as fast I could. I wanted to score.

“I’ll try again next week or something, but I made a play when I was there and we won the game. That’s what I’m happiest about.”

With no timeouts remaining, Darnold was appreciative of how Smith and the “guys” came through.

“For Vyncint to make that play for us, it was huge,” stated Darnold. “It was a really good drive. I shouldn’t be taking sacks in the two-minute, especially with no timeouts, so that was bad by me. But our guys, like they were all game, they were resilient and we just kept pushing.”

Despite the loss, Needham was still solid with six tackles and two passes defensed.