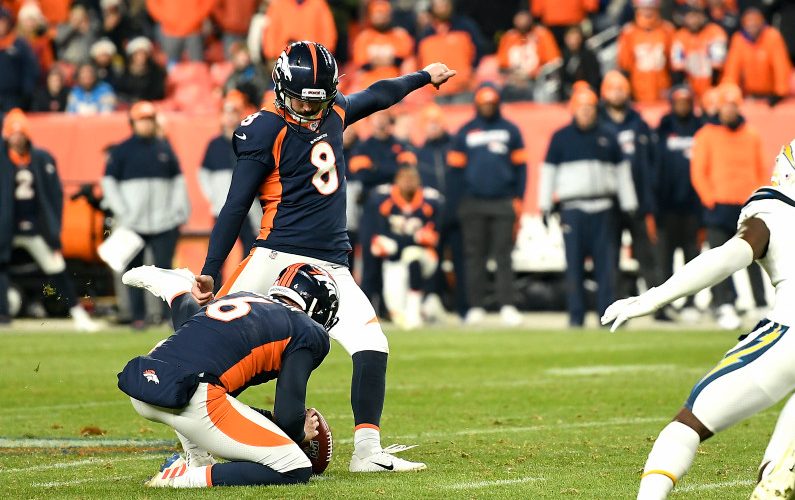 The Combine Report: Week 13 Review – Fiery McManus Proved He Can Still Get The Job Done

Week 13 of the NFL was intense with playoff implications across the board. Clearly, not all 32 teams will make the playoffs, however, the pride level for victories is absolute.

Some NFL Regional Combine pioneers exemplified their passion over the weekend, and Denver Broncos kicker Brandon McManus provided the attitude and competitive juices that all football players, no matter the position, should have.

LET MCMANUS DO WHAT HE DOES BEST – WIN

On each field goal attempt for kickers, there’s always a fight against unseen circumstances like mentality, distance, weather accumulation and pressure. The last thing kickers need, especially proven veterans, is to be challenged by a doubting coach.

That will either create doubt in the kicker or provoke the kicking specialist to get fired up.

This was the case for Denver Bronocs kicker Brandon McManus and his head coach Vic Fangio during their contest against the Los Angeles Chargers.

With a second remaining in the first half from the Chargers’ 47-yard line, McManus was prepared to extend the Broncos’ lead by 10 after hitting the potential field goal.

Fangio decided to not allow the Super Bowl winning kicker the opportunity of performing his job due to what he’s “seen many times” from kickers.

“I didn’t want to try the 65-yarder,” said Fangio. “At that point, I didn’t think it was desperation. I’ve seen many times where guys go out there and try extra-long kicks. They alter the mechanics and it affects (them) the rest of the game. I’m going to say that that decision not to let him go out there for the 65-yarder led him to making the 52- and 53-yarder.”

McManus was, rightfully, furious and went on a tirade on the sideline.

“(Fangio) hasn’t been here that long to see my total range, in training camp over the years and (practices and games),” stated McManus. “I knew I could make it, they’ve seen me make it in practice, and we were right at the line that I gave them.”

According to reports, McManus connected on a field goal for 75 yards in practice, and during warmups, he was booting balls from 65-yards to demonstrate he was ready for any situation.

That opportunity was lost, and the Chargers eventually made the game interesting by tying the game at 20 with :19 left in regulation. After a pass interference penalty by the Chargers, the Broncos got the ball on the Chargers’ 35-yard line.

After being counted out by Fangio, McManus wanted this attempt for the win, and to eliminate any doubts Fangio has about the RC pioneer’s ability.

On the first attempt, the Chargers called a timeout in hopes of freezing McManus. He made it. On the next and final attempt, McManus nailed the 53-yard field goal again.

Despite the heated, competitive exchange, McManus and Fangio continue to stay on great terms. For a win, and potential history, McManus is always game.

“One hundred percent (on good terms with Fangio),” voiced McManus. “Like I said, kicking is a completely mental game. You battle the struggles, the ebbs and flows of it. … We deal with a lot of the same scrutiny. He has to make decisions, and I have to make pressured kicks.

“At the end of the day, I’m mad because I didn’t get to kick, and in his mind, he made the right decision for the team. I have no problem with that, but like I said, I would love to have my name in the history books.”

In terms of history, McManus is the second kicker in Broncos’ history to successfully make at least two 50-yard field goals in the fourth quarter or overtime of a single game. McManus has made six career game-winning field goals, showing he is one of the best and still can get the job done.

NFL Caretakers: The Best Behind The Whistles - Down The Stretch Previous post

The Combine Report: RC Pioneers On The Move - Callahan Sign With Lions, Zimmer Is A Brown Next post