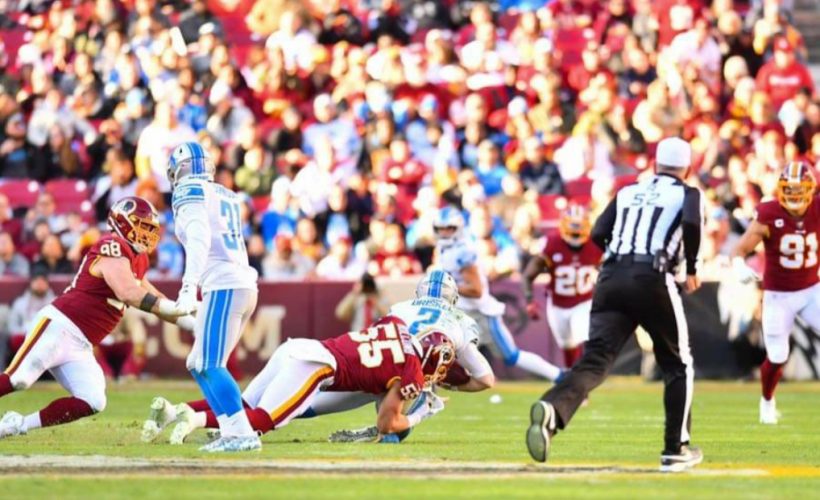 At the end, especially in the highly competitive NFL, it comes down to who wants it (the win) more. A couple of NFL Regional Combine pioneers came through for their clubs in Week 12 – primarily for the Washington Redskins.

HOLCOMB A FORCE/DUNBAR SEALED THE DEAL

The last time the Redskins won a game was against the Miami Dolphins in Week Six, which was a nail biter. For the most part, the Redskins have been largely competitive, only to lose out at the end.

Against the Detroit Lions, the script was playing out for the opposing team to squeak out another win over the Burgundy and Gold.

Not this time, as NFL Regional Combine pioneers rookie linebacker Cole Holcomb and cornerback Quinton Dunbar refused to allow a game to get away from them yet another week.

Holcomb was a mad man. With the absence of defensive lineman Daron Payne, Holcomb knew the Redskins’ defense needed more from him. And he delivered a career performance.

Holcomb led the Redskins in tackles with 13, including his first career sack.

With 2:32 left in the first half, the Lions faced third-and-6 from the Redskins’ 33-yard line. Lions quarterback Jeff Driskel received the ball from shotgun.

Holcomb was lined on the edge showing blitz from the right. Holcomb took off, Driskel tried to step up into the pocket to avoid defensive back Jimmy Moreland from his right and Holcomb tracked him down from behind for the sack, causing a six-yard loss.

The sack took the Lions out of field goal range and they were forced to punt.

“It was a good feeling,” said Holcomb, according to redskins.com. “I’ll give Jimmy (Moreland) credit where it’s due. He flushed (Driskel) out and made it easier for me.”

Holcomb became the third rookie in Redskins’ history to have two 10-plus tackle performances. Former safety LaRon Landry did it in 2007, while former safety Chris Horton accomplished that feat the following year.

Holcomb also became the eighth rookie in franchise history to compile at least 70 tackles in their first season.

Dunbar has been the Redskins most consistent defensive player all season. Dunbar finished with four stops, however, he is at his best in creating turnovers which came at the right time to end the game.

With :54 second remaining in regulation, the Lions had third-and-9 from their 37-yard line. Driskel was in shotgun formation when he received the snap. Dunbar was playing off Lions wide receiver Marvin Jones Jr. to bate Driskel for a long pass.

Driskel dropped back and threw deep over the middle. Dunbar kept his eyes on Driskel, and when the ball was released, Dunbar stepped into Marvin Jr’s route to under cut the pass and picked off the ball for his fourth interception of the season.

The turnover had the Redskins in field goal range, giving them the opportunity for a game-winning field goal, which they ultimately achieved.

Dunbar’s interception is his ninth for his flourishing career, and it affords him a single season career high. Currently, Dunbar is tied for third in the NFL for interceptions with Marcus Peters (Baltimore Ravens), Marcus Williams (New Orleans Saints) and Janoris Jenkins (New York Giants).

Lions receiver Marvin Hall was held to one catch for 21 yards.

LockerTalk Podcast: How Are The NFL Caretakers Faring At The Midseason Point? Previous post