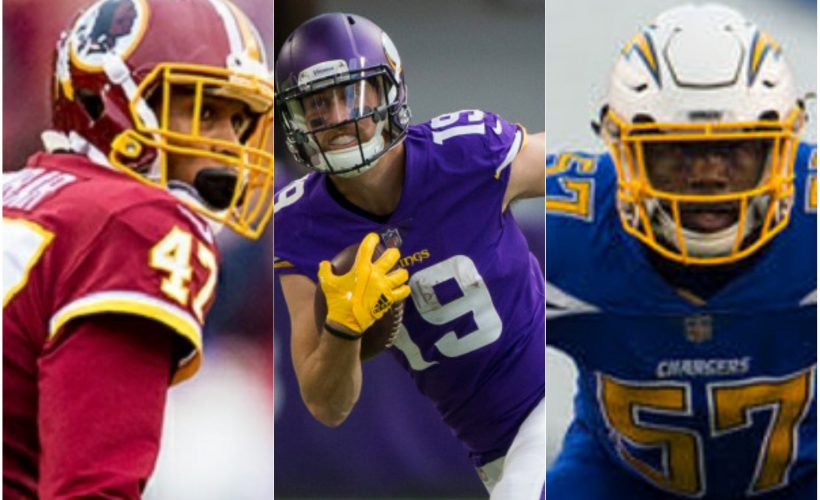 The Combine Report: The Top 10 NFL Regional Combine Players For 2017

There are essentially 1,600 players in the NFL, and among those athletes, 97 are pioneers of the NFL Regional Combine platform.

Since 2011, NFL Network has been featuring the Top 100 Players of the Year, and the players do the voting. The RC has been promoting undiscovered talent since 2012. 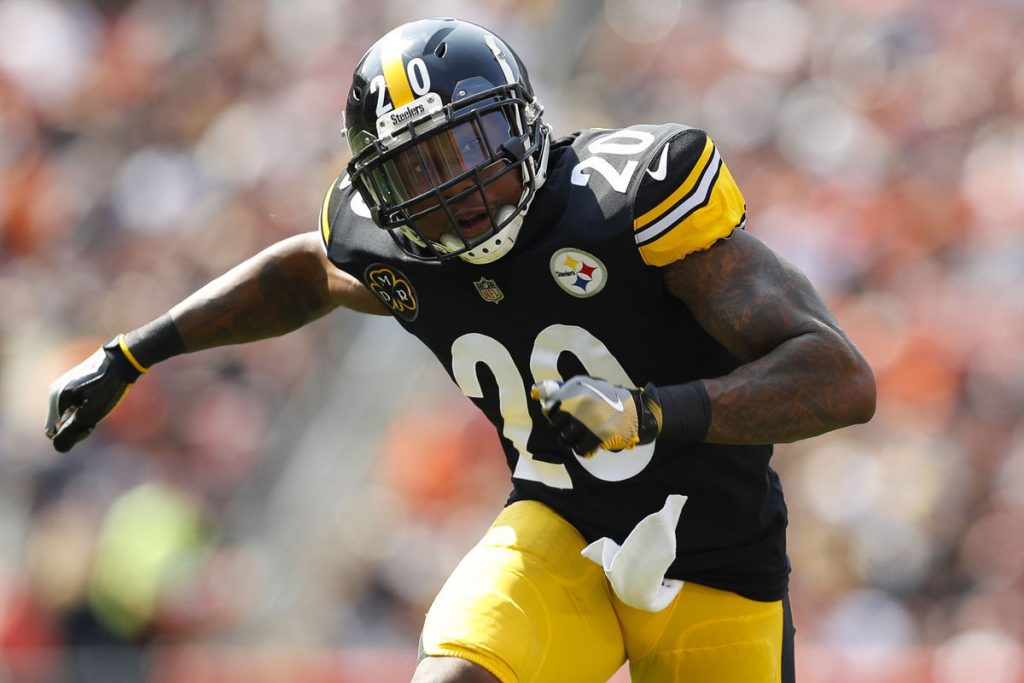 World-class RC athletes have set an incomparable standard of football excellence, making the Regional Combine an important part of the NFL equation.

The 2017 NFL campaign was a success for the RC standouts and for the first time, they will be recognized on the Top 10 list of their own.

Ishmael is a physical defensive back who looks to make a play by blowing a player up on each occasion. He had one start in 2017, but he racked up 29 tackles, including a sack against the Seattle Seahawks, and had a pass defensed against the Tampa Bay Buccaneers in Week 15.

In Week 11, Seahawks quarterback Russell Wilson was in striking distance of scoring in a tight contest. At the snap of the ball, Wilson attempted to scramble, however, Ishmael blitzed and chased Wilson down for a huge sack.

Mayowa had a drop off in the 2016 season, largely due to the increase playing time of Jaylon Smith and DeMarcus Lawrence’s dominance. Mayowa amassed 21 tackles, including a sack which came against the Seahawks in Week 16.

The veteran punter was one of the top punters last season as he landed 26 out of his 64 punts inside the 20. Berry managed to help place the Steelers defense in great position to win the battle of field positioning. 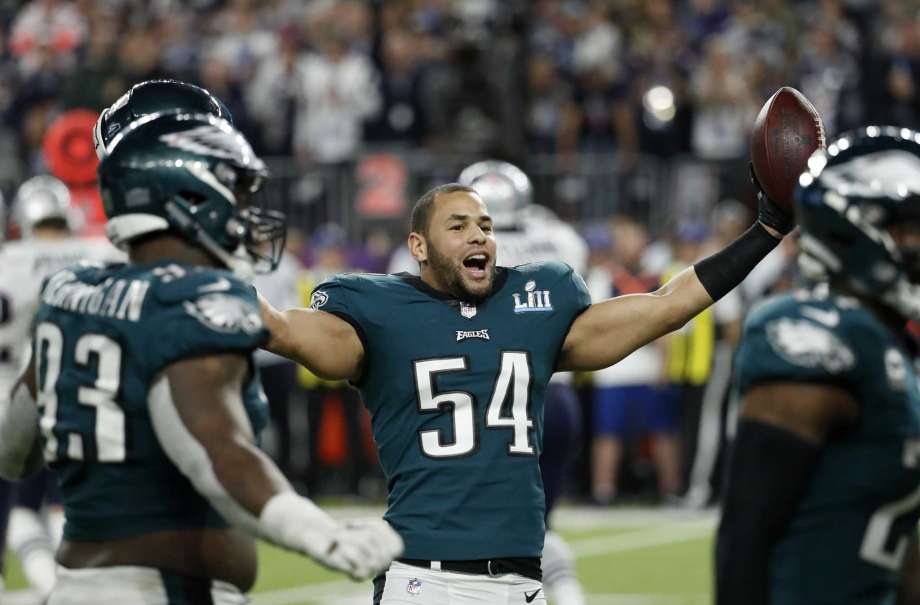 Grugier-Hill is the latest RC pioneer to win a Super Bowl ring. He was like a Swiss-army knife for the Eagles in 2017. The former draft pick of the New England Patriots in 2016 got his chance to shine and help take down his former mates on the biggest stage of sports.

Grugier-Hill was impactful when needed on defense, especially on special teams. He recorded 22 tackles and forced a fumble against the Washington Redskins in Week 7. He is versatile – displaying good speed, fundamentals and kicking ability.

In Week 11 against the Cowboys, he was an emergency kicker and kicked off five times, including a touchback. Amazing! 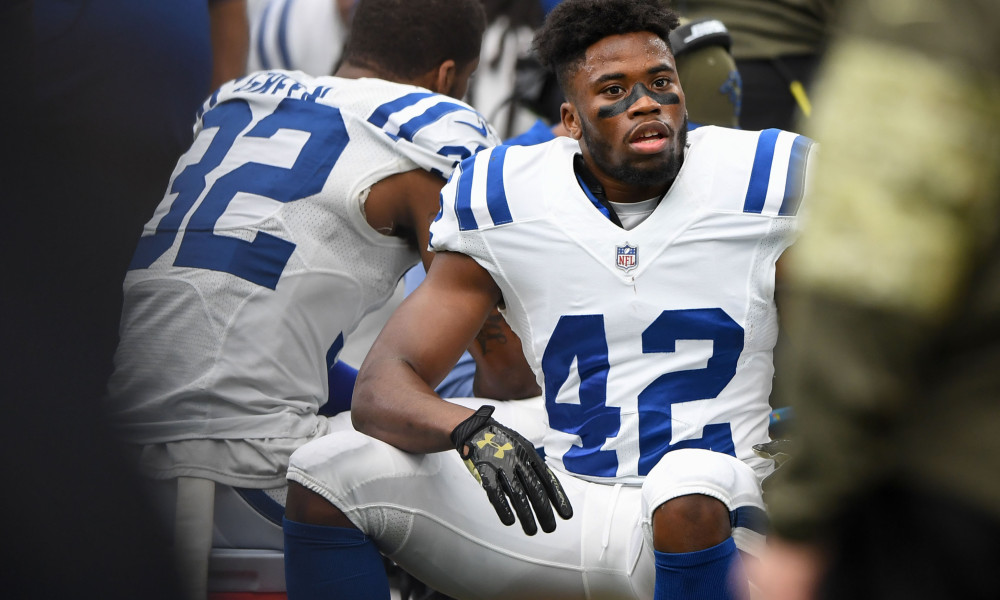 Moore had a solid rookie season in Indy. The standout from Valdosta State worked his way from special teams to earn playing time with the defense. After some injuries in the secondary, Moore was given the green light to play more – which led him to start the final five games for the Colts.

The physical defensive back registered 38 tackles, including forcing a fumble when he blasted Baltimore Ravens running back Alex Collins in Week 16. Moore also had his first career interception which came in Week 15 against the Denver Broncos. 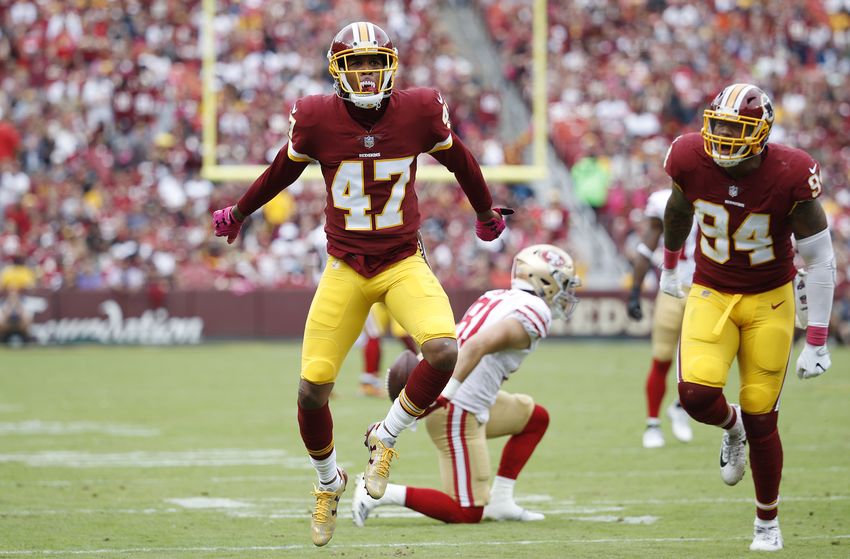 The highly motivated, aggressive corner came on strong last season for the Burgundy and Gold. Dunbar is known for getting under the skin of pass catchers as he lives up to the challenge. The converted wide receiver from Florida earned significant playing time when Pro Bowl cornerback Josh Norman sustained an injury.

With four starts, Dunbar registered 35 tackles and an interception, which came against the Eagles. Dunbar, who journeyed through the RC in 2015, signed a multi-year extension on New Year’s Day of 2018 with the Redskins, and he recognizes the impact the platform had on his career.

“Attending the (NFL) Regional Combine was a tremendous step for me,” Dunbar expressed in a conversation. “Going to the Regional Combine and not getting invited to the real combine helped me big time.” 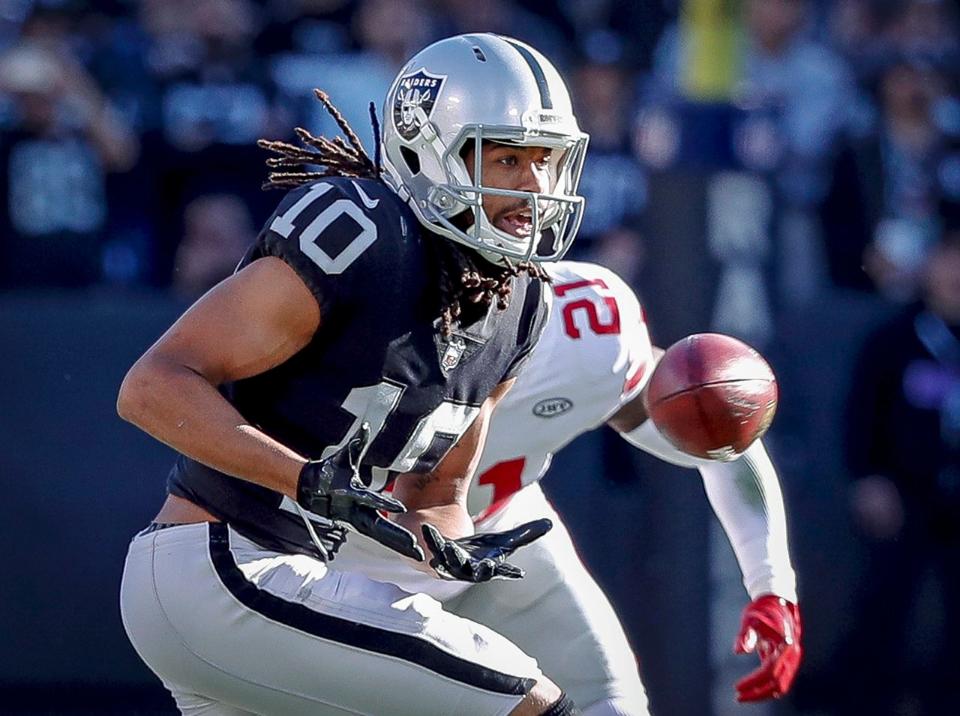 Roberts became a legitimate third-receiver in 2016. With the increased amount of pass catchers on the Raiders’ roster last season, Roberts struggled to cross the goal line and was not as clutch, but quietly posted the best numbers of his career.

Roberts finished the 2017 season with 43 receptions for 455 yards, averaging 10.6 yards per catch – all career-highs. His only touchdown of the season came in Week One against the Tennessee Titans 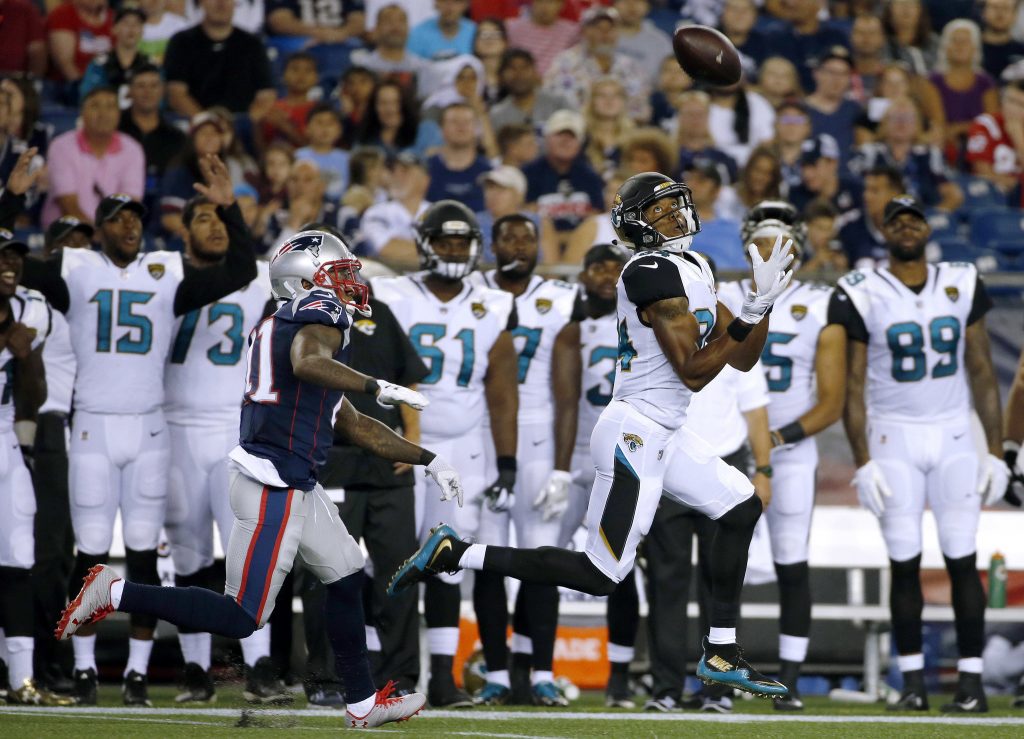 Cole was signed as an undrafted free agent and after being impressive during the preseason, the 6-1, 194-pound receiver earned a place on the Jags’ 53-man roster.

Cole showcased his ability to be a deep-ball threat and quarterback Blake Bortles went to him often. Towards mid-season, Bortles and Cole started to click as he caught three passes for 50 yards and more, including a 75-yard boom for a score against the Seahawks in Week 14.

The Jaguars experienced some injuries with their pass catchers, which opened the door for Cole as he earned six starts. Cole went on to lead the Jaguars in receiving yards with 748 off 42 receptions and three touchdowns. 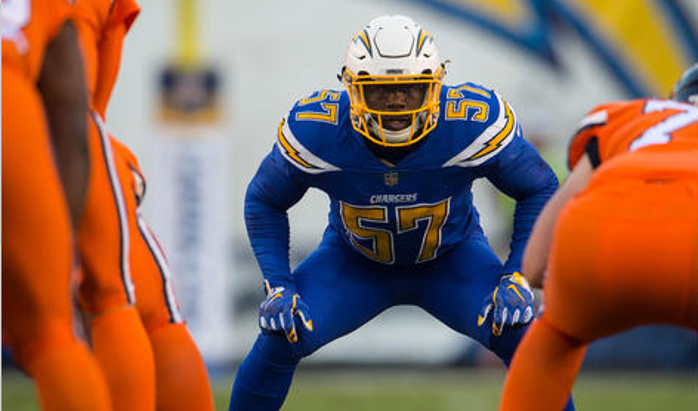 Brown has been in beast mode ever since he entered the league as a fifth-round draft pick by the Chargers in 2016. Brown led the Chargers in tackling in his rookie season with 79, and racked up another 79 tackles after sustaining a minor ankle injury.

In his first three games, Brown posted at least 10 tackles each contest. 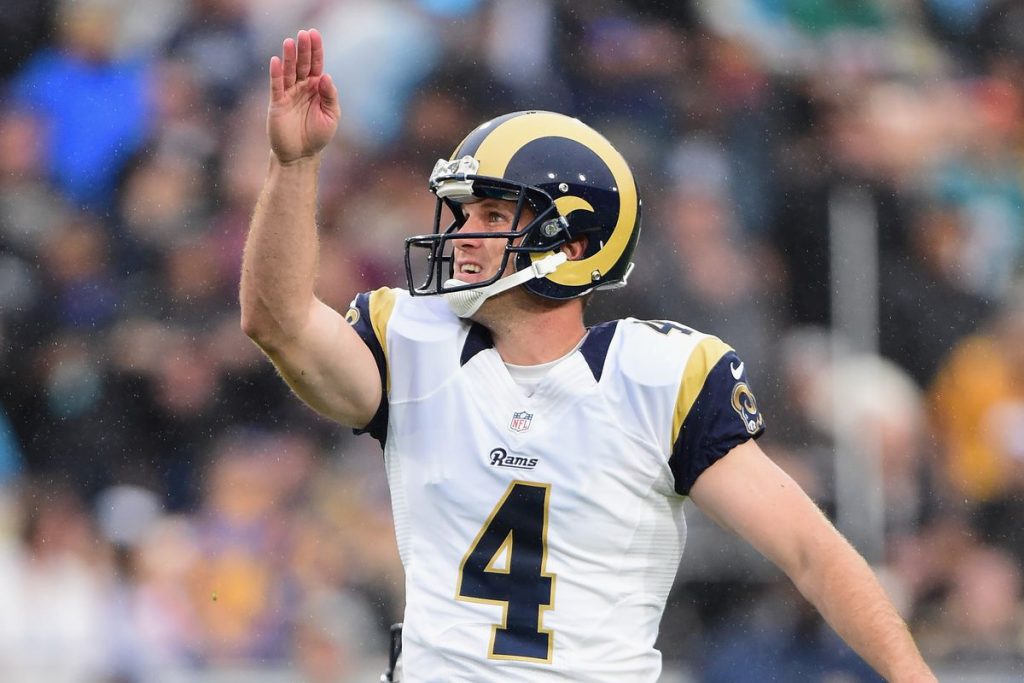 Zuerlein led the NFL in points scored with 158 as he averaged 11 points per game. He has been a reliable asset for the Rams, especially in Week 4 against the Dallas Cowboys when he made seven field goals.

Before Zuerlein was lost for the season due to a back injury, he was perfect within 40 to 49 yards (12 for 12), nailed six out of seven beyond 50 yards and made 46 out of 48 extra points. Zuerlein finally earned his first Pro Bowl selection. 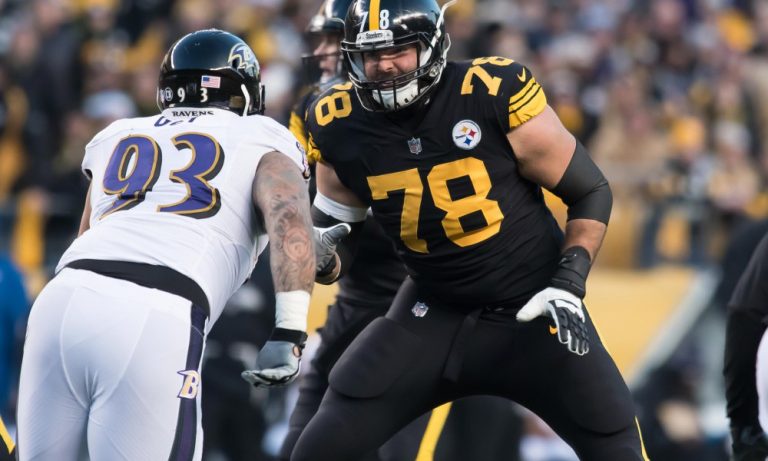 Villaneuva has served and protected this country as an Army Ranger, and now he defends the back side of future Hall of Fame quarterback Ben Roethlisberger. Since taking over the left tackle position in 2015, Villanueva has kept Big Ben upright and he leads a potent offense consisting of the league’s top rusher (LeVeon Bell) and receiver (Antonio Brown).

Villaneuva was recognized as a Pro Bowl tackle last season. 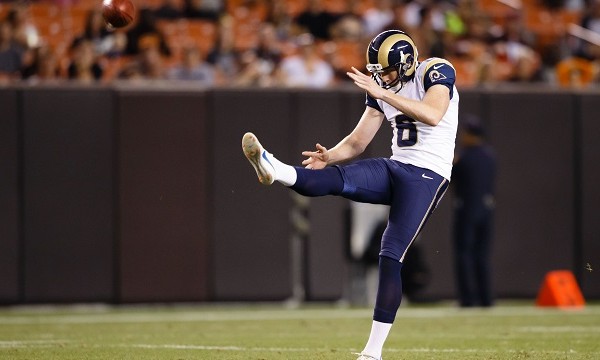 Hekker is without a doubt the best punter in the NFL. The All-Pro punter averaged 47.6 per boot and landed 27 out of 54 punts inside the 20-yard line. To put the icing on the cake as a special weapon, Hekker had a 118.8 passer rating as he completed two passes averaging 17 yards.

Hekker has been the standard for the RC for the past couple of years, however, Adam Thielen was the cream of the crop for the NFL Regional Combine platform for the 2017 NFL campaign.

Thielen finished the season fifth in receiving yards (1,276) and eighth in receptions (91). After a successful Chicago-held RC trial in 2014, Thielen worked his way from a special teams ace to the best receiver on the Vikings to earning the respect of his peers as they ranked him the 36th best player in the NFL.

Clearly, the Pro Bowl is number one on this list.

The Combine Report: CFL 2018 Season - 24 RC Pioneers Will Be Chasing The Grey Cup For Championship Glory Next post