The Combine Report: The Lions Add Potential Hunters To The Pride Through The RC

Each team in the NFC North is positioned with a cannon firing quarterback. In order to standout in this division, the team with the best hybrid type defensive unit would have an edge. The Detroit Lions finished third overall in total defense in 2014. The only component of the Lions’ defense that needs to be sharpen is their effectiveness against the pass.

The Lions, respectfully, ranked 13th against the pass at allowing 231.6 yards per contest last season. Through the platform of the NFL Regional Combine (RC), they potentially beefed up their defensive roster with athletes who can either get at the quarterback or drop back into coverage to make plays.

Linebacker Julian Stanford returns to the Lions, but is pressing to get on the field for more than just special teams action. 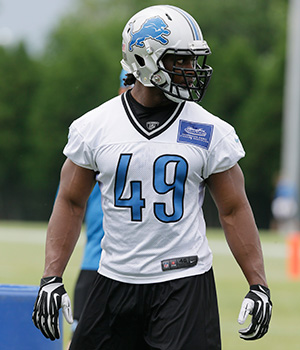 Stanford attended the NFL Regional Combine in 2012 at the New York/New Jersey workouts. The standout from Wagner was impressive and is fundamentally sound, earning him an invitation to the NFL Super Regional Combine, which was held in Detroit.

Shortly after the 2012 NFL draft, Stanford signed as an undrafted free agent with the Jacksonville Jaguars and stay on their roster for a season. The Lions signed the 6-1, 230-pound linebacker in December of 2013, a few months after his release from the Jaguars, and has been solid for the club ever since, registering 28 tackles for his career.

Xavier Proctor could conceivably see some action on the field this season after transitioning from the defensive line to the offensive line to play tackle. The 6-6, 315-pound lineman participated in the Baltimore-held sessions in 2013, and stamped his name on NFL scouts’ evaluation sheets to receive the invite to the NFL Super Regional Combine in Dallas.

Proctor didn’t entice NFL attention right away so he signed with the Orlando Predators of the Arena League during summer. However, less than a month with the Predators, the Lions signed the product of North Carolina Central in August of 2013 and made Detroit his home.

“I’m hungry man, look at these mittens. I’m like a dog right now and no one wants to see this dawg,” said linebacker Brandon Copeland when he attended the first annual NFL Veteran Combine in March.

Copeland is on a mission of destiny and he could be one of the steals among all undrafted free agent signees this offseason.

Copeland is a pure athlete coming from a basketball pedigree enriched out of Baltimore, MD. The product from Pennsylvania returned home in 2013 to shine at the Baltimore-held workouts, which he did, and earned an invitation to the SRC.

The Ravens signed the 6-3, 246-pound linebacker, after his stint with the Predators of AFL. Due to the depth of the Ravens defensive line, Copeland was released, but inked with the Tennessee Titans. After being waived by the Titans, Copeland has been working to get back to the league as he lost over 30 pounds to more efficient this time around, especially on special teams.

The opportunity of the NFL Veteran Combine allowed Copeland to display his speed, hands, athleticism and quickness in front of teams scouts and general managers.

Comparably to Copeland, these under the radar gems from the RC has been in the wilderness of the NFL licking their chops for the moment to satisfy their hunger for success.

Now since they are with a pride, let’s see if these potential Lions can hunt.

Follow @@Locker_Report
Share
2015 NFL Officiating Clinic: Former DB Wade Davis Finally Was Able To Be Himself On A NFL Stage - Gay Previous post
For Many Baltimore Fans, Free Admission To Ravens' Practice Was - Priceless Next post