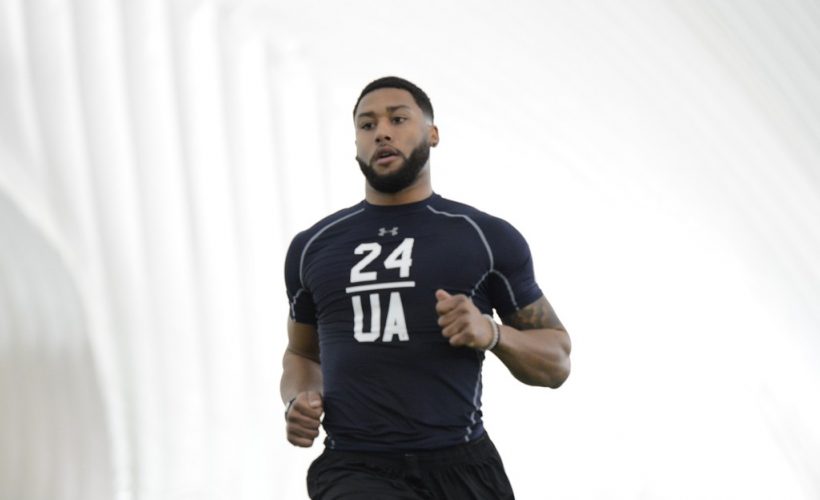 RENTON, Wash. – The temperature surrounding the Seattle Seahawks training facility was chilly and inside the palace where the reigning NFC West champions “always compete” was pleasantly cold. However, the NFL hopefuls heated the facility with their competitive banter to impress NFL scouts.

However, if defensive tackle Daniel Chism asked about the setting, he would say it was hot.

Chism was pumped, and while players appeared to be rigid, the energetic defensive lineman from Benedictine was firing all his combine brethren up.

In terms of firing, Chism did exactly that as he exploded from his stance towards the dummies in his Punch and Hand Shiver and Pass Rush drills. Combined with his power and athleticism, Chism looked solid as a pure nose tackle standing 6-2, 305-pounds. 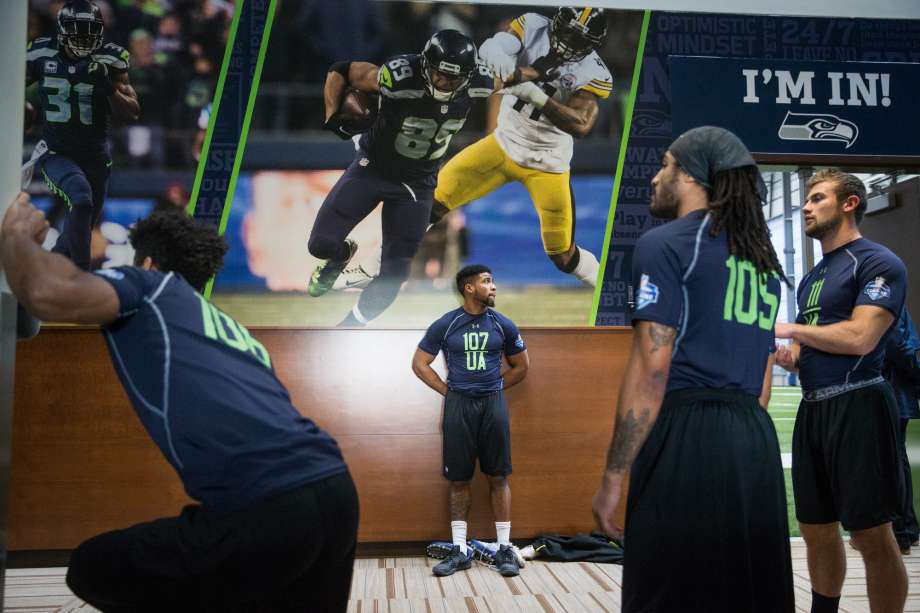 “I’m a loose guy who is willing to work with anybody,” said Chism. I’ve been playing nose tackle since the third grade and I played third technique in high school. I’m motivated and I welcome all trouble teams. Come get it, I’m ready (laughter).”

Despite battling through injuries for the past couple of seasons at Catawba, defensive end Calvin Barksdale looked good as well.

No player ripped the turf with their speed, but several athletes displayed tangibles NFL teams can work with.

Players such Dejaun Butler of Hawaii, Kennedy Johnson of Linfield, Julius Rucker of Southern Oregon and Marcus McCoy of Upper Iowa jump started their quest to the NFL on a good note as they highlighted their skill sets for going after the ball with intensity.

Nevertheless, some were a touch more polish.

Wayne Morgan, cornerback from Syracuse, battled through injuries, such as a torn meniscus, and dealt with three different coaching staffs. Still, his collegiate situation did not slow him down as he delivered a solid workout.

“I came in with Doug Marrone and his staff and when the changes happened, it was tough to deal with,” said Morgan. “But I’m not the one to make excuses. Through those times, my mom and God got me through…He definitely has a plan for me and I’m trying to stay focus.”

CLICK FOR MORE NEWS REGARDING PLAYERS WHO ARE SUCCEEDING IN THE NFL AFTER ATTENDING THE NFL REGIONAL COMBINE.

And it will not be a surprise if his course leads him to the NFL as his aggressive nature towards his sessions were evidences of his passion and determination. He displayed good hands, quickness, balance and control of his body.

Kedrick Davis of North Carolina-Charlotte displayed great form during his tests, especially in the short shuttle, where balance and control took center stage.

Davis tracking skills in chasing down balls was impressive.

Isaiah Jackson is a big corner from Western State, Colorado standing 6-1, 180-pounds. Jackson is a calculated player and very athletic.

Clearly, throughout his trials, he was precise in his techniques by getting low to the ground without losing control and balance in his shuttle, “W” and Back Pedal, Weave, 90 Degree Catch Drills.

“My coaching staff always stayed on me,” said Jackson. “My coach and trainer got me more flexible and athletic and helped me with my change of direction and I finished strong.”

From top to bottom, Jason Thompson from the University Utah stole the show. 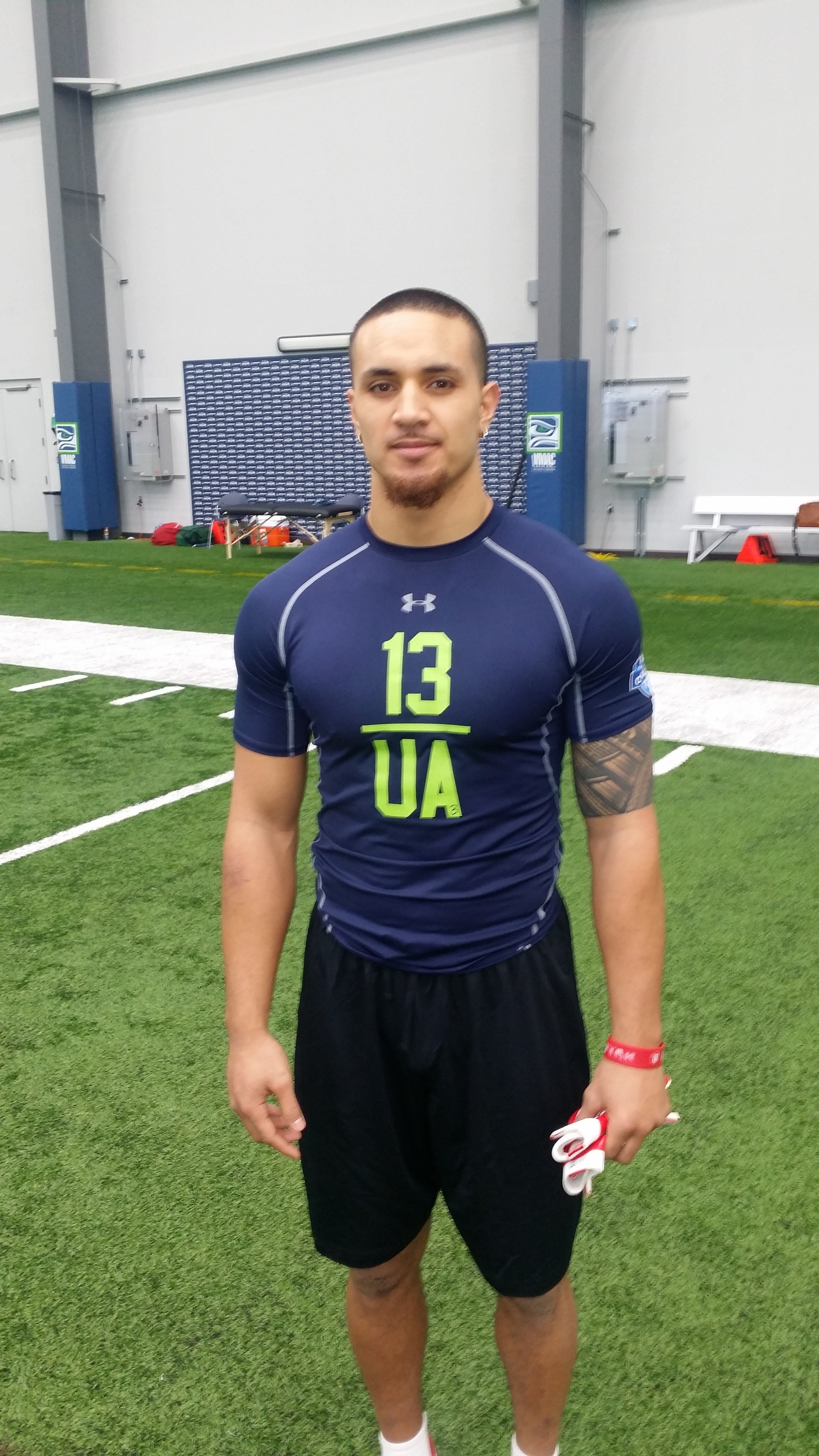 Thompson has the size and tools needed in the NFL. The agile safety possesses great footwork and hands. When the passes were in flight, not once did a ball hit his body, as he made clear, strong hand catches.

The converted quarterback performed brilliantly in his Back Pedal, Break Forward, Speed Turn and Catch, Close and Speed Turn and “W” drills as he showcased game-like speed, balance and control.

Between now and the 2017 NFL Draft, Thompson will continue to bulk up his 208-pound frame. Moreover, when he does, his eventual ability to play in the box will be beneficial for any squad.

“It was huge to come out here and get noticed,” said Thompson. “I know the process is working and I will continue on.”

Well said by Thompson as his words is the reflection of each NFL hopefuls’ thoughts process during their workouts on this NFL platform.