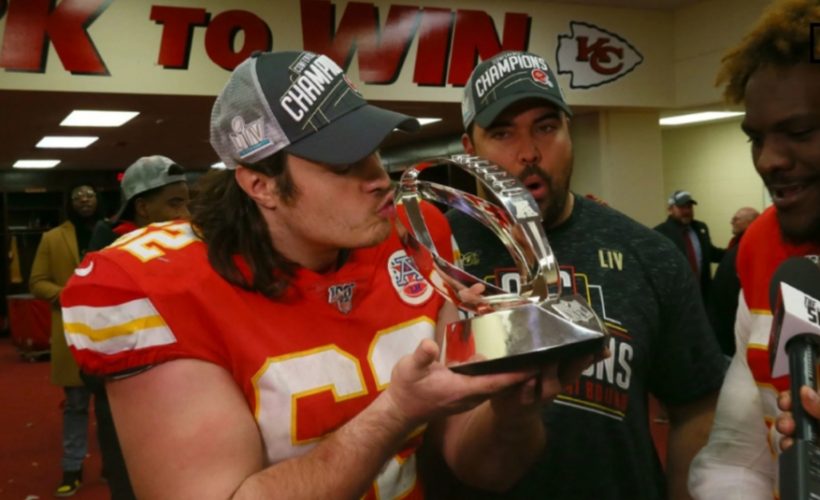 KANSAS CITY, Mo – Trick question: Besides Kansas City Chiefs quarterback Patrick Mahomes’ natural instincts and talents, what else helps him to be dynamic? Is it the talent around him or the system within he operates? All of that helps, however, the other key, probably the most important, is Mahomes’ protection up front.

And it starts with center and NFL Regional Combine pioneer Austin Reiter.

Accompanied, as a newcomer for a full season, with left tackle Eric Fisher, left guard Andrew Wylie, right guard Laurent Duvernay-Tardif and right tackle Mitchell Schwartz, Reiter has glued quickly with this unit and they have been special.

Reiter neither receives the accolades, makes bold comments nor brings attention to himself. Reiter just stays at home with Mahomes in his sight, signal out what he sees and keeps the middle of the pocket sealed for Mahomes to be creative, which allots him to be the MVP that he is.

Reiter is relentless in the trenches and on his one-on-one blocking assignments, and the seventh round draft choice from South Florida in 2015 normally stands his opponent up with no pressure coming towards Mahomes.

With all the misdirections, jet sweeps, motions in the backfield, it takes a disciplined, patient center to keep his emotions and nerves intact.

“I don’t think it’s set in. We’re still going so the whole season, I haven’t looked back, you know,” said Reiter after the game in an one-on-one conversation. “It’s been a week to week mentality. I’m just one of eleven guys on offense out there trying to do my job the best I can.

“We have a hell of a leader at quarterback (Patrick Mahomes),” he continued. “He makes it look easy, and he makes it easy on us. He sees things, we see things and it’s just a rhythm everybody’s in and it’s unbelievable right now.”

Before Reiter took over as the starting center for the Chiefs this season, he played only 333 snaps in three seasons. In 2019, Reiter experienced 1044 snaps and only was called for holding five times. That is remarkable considering how fast this dynamic Chiefs’ offense moves.

“Just working hard, continuing to stay hungry and stay on the grind during the offseason,” voiced Reiter, humbly. “Pushing myself, trying to get myself in the best shape physically and mentally. Getting ready for…February football.

“I think anything is possible with this team and I knew that this offseason,” he added. “It was my job to lose. It was something I had to embrace. Taking on the role…and we are still hungry, we still got more to go.”

Normally, Reiter leads the Chiefs to the field at the beginning of each possession.

Next time Reiter leads the Chiefs on to the field for a possession, establishing his readiness, it will be in Super Bowl LIV at Hard Rock Stadium.