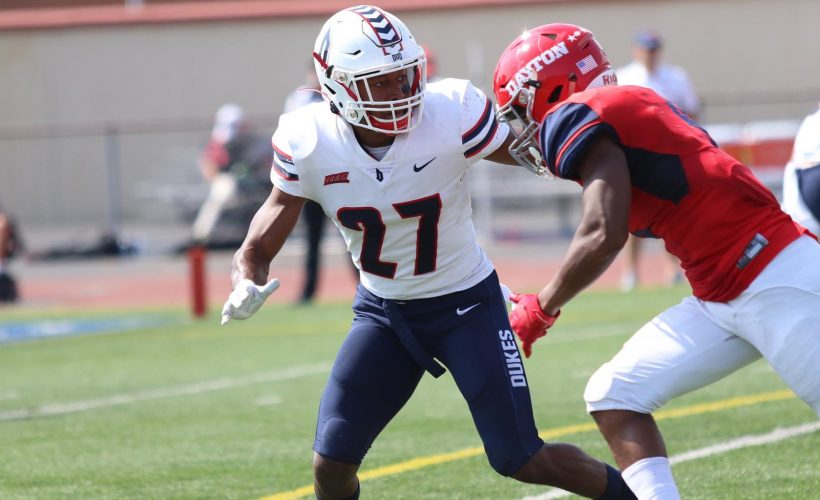 The Combine Report: Reid Harrison-Ducros “I’m Prepared To Go In.”

Harrison-Ducros Prepared For The Next level, 2020 NFL Draft Prospect

Preparation gives opportunity its purpose. However, preparation comes with a price, a price that can not be purchased but through sweat, blood, tears – and disappointments. Not many individuals are willing to serve the purpose of what opportunity can provide.

Preparation is not just a mindset, it is a lifestyle.

“I’m prepared to go in,” said Harrison-Ducros via conversation.

After a successful high school journey, Harrison-Ducros took his talents to Boise State where experienced early success. The sweat Harrison-Ducros displayed was evident. Then, the blood and tears followed.

Entering his second season at Boise State, the coaches that believed in Harrison-Ducros departed the program which ushered in new coaches with a different direction. The 5-11, 190-pound cornerback started his sophomore season, only to sustain a concussion shortly after, which opened the door for bigger defensive backs.

Following several failed attempts to join institutions, combined with no promises for legitimate playing opportunity, Harrison-Ducros was able to stake his claim at Duquesne. Through his strong support system fashioned by his parents and family, the disappointment process of preparation was doable.

“My family,” said Harrison-Ducros, when asked about his support system. “Both of my parents had to work extremely hard to not only make it out of their environment, but to get where they’re at today and give me the life I have.

“As well as my entire family has poured so much time and effort into my career that I just want to give back to them tenfold.”

Harrison-Ducros had a solid senior campaign as he was not targeted as much. The senior captain had four interceptions along with 36 tackles and nine passes defensed.

Despite excelling with the defensive unit, special teams is where Harrison-Ducros identifies as value.

“Special teams are important because they can be the difference in winning a game and not winning,” said Harrison-Ducros. “A single bad special teams play can change the whole outcome.

“One thing I pride myself on is being able to do absolutely everything on special teams, except actually kicking the ball (laughter),” he continued. “I’ve played every position from kickoff, to punt team, to punt return team, to even holding for PATs (point attempts).”

Harrison-Ducros is intuitive and sound in his decision making. He is not a gambler as his anticipation is normally calculated. Harrison-Ducros sinks low to the line and used his body well to keep receivers to the outside, allowing the sideline to be an extra defender.

“I wouldn’t necessarily say I have a favorite sign as a give away because each team has their own individual tendencies,” voiced Harrison-Ducros with excitement. “For example, one team’s QB (quarterback) might double take to one side to show where he’s going or another team’s wide receiver might tap his side when he wants the ball to come to him.

“So I wouldn’t say there’s a favorite tendency, but I’d say my favorite thing is to find a team’s tendency,” he added. “I’m a perfectionist when it comes to technique and I am one because I know how much of a game-changer technique is in a DBs (defensive backs) game. It can be the difference between making the play and not.”

With little to no exposure for NFL teams to come to Harrison-Ducros door step, NFL Football Operations recognized the confident defensive back’s skill set as he earned an invitation to the 2020 NFL Regional Combine Invitational.

The platform was set for Harrison-Ducros and the other invitees to showcase their talents in front of NFL decision-makers in Miami on March 29th. Unfortunately, due to the country’s crisis regarding the coronavirus pandemic, the annual discovery stage was canceled.

Disappointment surfaced again, but through preparation, adjustments were made to only make the eventual opportunity sweeter.

“My immediate response to it was disappointed,” expressed Harrison-Ducros. “I was beyond excited when I received the invitation to be a part of the Regional Combine and was looking forward to showcasing my abilities in front of all of the scouts.

“So when I got the official email that it was cancelled I was upset, but circumstances change all the time especially with this virus, so I just readjusted the game plan and went from there.”

And from that dramatic change where destiny was in reach, through preparation, fate is now at Harrison-Ducros’ fingertips.

“To stay prepared I’ve been working out everyday. I have a weight bench at home as well as my high schools football field is still open,” said Harrison-Ducros. “So I’ll alternate between weight workouts to field workouts, and then add in running about 2.5 miles every other day.

“So even though everything’s shut down, I’m trying to stay in the best shape I possibly can.”

“I tend to focus on the little things. For example, foot placement coming out of breaks as well as in press coverage, hand placement and arm movements, going through speed ladder drills four or five times a week to make sure my foot speed stays quick,” detailed Harrison-Ducros. “As well as I’ve been working on my defensive back techniques since the sixth grade with people like Jay Valai (defensive backs coach at University of Texas), Larry Brown (Super Bowl 30 MVP), Clay Mack (defensive back guru).

“So to be able to have them teach me so much throughout my career is a huge blessing.”

The 2020 NFL Draft is set for April 23rd to the 25th. Chances are, Harrison-Ducros could very well be a third-day selection. Harrison-Ducros should be projected as a late-fifth round to seventh round pick.

With the process of opportunity in reach, the preparation of Harrison-Ducros is nearly hundred fold as whatever liberty may bring, the courageous cornerback is inspired to compete – and for a title.

“The competition. Since I was little, I’ve competed in everything I was a part of and it heightens on the field,” voiced Harrison-Ducros. “I love to compete in anything football from workouts all the way to the film room. I’ve won one championship in my entire career and it was the best feeling ever.

“So anything I can do to get back to that feeling, whatever it takes, is what inspires me.”

Wherever Harrison-Ducros may land, the manifestation of preparation will come forth knowing the NFL Regional Combine pioneer will be prepared to bring excellence.

“I’ve had a football in my hands before I could even crawl and that love for the game hasn’t stopped. Playing it, watching it, preparing for it, the friendships, I love it all. Football’s just in my DNA.

“I want to have the ability to play every position possible so if someone goes down, I’m prepared to go in.”

The Combine Report: 2020 NFL Draft - HBCU,Ready Defensive Talents - Where They Fit Next post