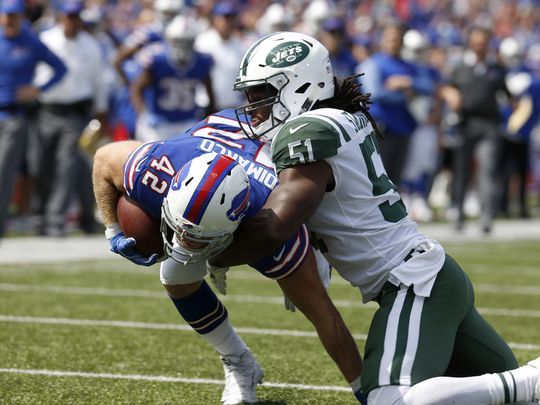 Linebacker Julian Stanford was the first player from the NFL Regional Combine to sign with a new club during the 2018 NFL free agency signing frenzy.

Stanford stays within the AFC East division as he inked a two-year, $3 million deal ($550,000 guaranteed) to be a member of the Buffalo Bills. The hybrid linebacker from Wagner ventured through the RC in 2012 when the platform was first introduced by NFL Football Operations.

After being a member of the Jacksonville Jaguars, Detroit Lions and Tampa Bay Buccaneers, Stanford found a solid place with the New York Jets where he had his best professional seasons.

Stanford is primarily a special teams ace, but when he is active with the defensive unit, the 6-1, 230-pound linebacker showcases his athleticism and ability to get after ball carriers. Stanford will be in great company with Bills veteran linebacker Lorenzo Alexander, who spent majority of his career as a special teams great before becoming a Pro Bowler.

Stanford has 69 tackles for his career.

The Combine Report: Talents The NFL May Miss For The 2018 Season - Defensively Previous post