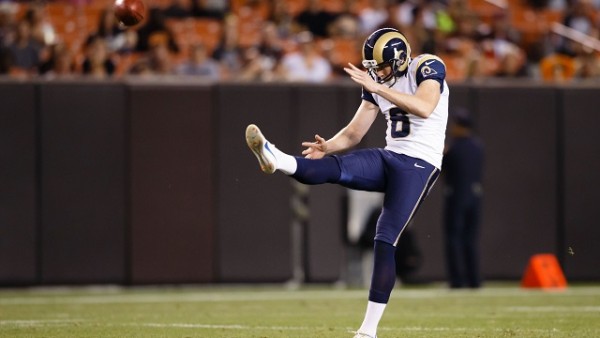 When Hekker came through the NFL Regional Combine process in 2012, the Rams quickly signed him as an undrafted free agent following the NFL Draft. He immediately showed that he was worth the signing, and more.

In 2013, Hekker started to clement himself as the best punter in the NFL as he garnered All-Pro statue – five times (three-time first teamer and two-time second teamer).

However, Hekker is not just a ace in the punting game. He is a solid thrower of the ball. The once high school quarterback excels at the opportunity of throwing first downs during fake punts to assist the offense in moving the ball down the field.

Since his rookie season, Hekker has thrown 22 passes and completed 13 of those attempts – all of which were converted for first downs.

“You think you are getting one thing and it is tough to prepare for the multitude of options a special-teams unit can have to run fakes,” said Hekker. “It’s not a throw to one guy. However you draw it up, you can attack the return team in a bunch of different ways.

“Really to be able to continue to surprise people is going to be a dwindling factor, but you can’t just play defensive stay the whole time because you’re not going to get any return opportunities and you’re not going to block kicks out of that,” he continued. “You have to pick and choose when you want to try and defend against the fake.”

Hekker’s exploits on the field are known league-wide. He can pin you his legs, or gash you with his arm. One legendary head coach summed Hekker up with one word – “weapon.”

“Hekker’s a tremendous weapon. I mean, this guy’s as good a player as I’ve ever seen at that position,” stated New England Patriots head coach Bill Belichick in 2016. “He’s a tremendous weapon in his ability to punt the ball, punt it inside the 20, directional kick it, involved in fakes, he can throw, he can run, very athletic.

“He’s like a quarterback. He can throw, he can run. You’ve got to defend him like you defend one of those guys. This guy’s a weapon. I mean he’s not a good player; he’s a weapon.”

In December of 2014, Hekker agreed to a six-year, $18 million contract extension with the Rams, and $9 million was guaranteed. That “weapon” referred by Belichick signed the largest contract ever given to a punter, and the first player from the RC process to ink a mega deal.

Each player who journeys through the NFL Regional Combine process wants to get a shot, an opportunity. They all dream of being great after being counted out.

Only a few have actually obtained that NFL dream.

Hekker was the first from the RC grouping to earn such mega success, and by being named to this immortalized NFL list, he has just added another feat for all NFL hopefuls to target.

LockerTalk Podcast: New York Jets WR Vyncint Smith, His Journey, His Passion, His Greatness In The Making Next post