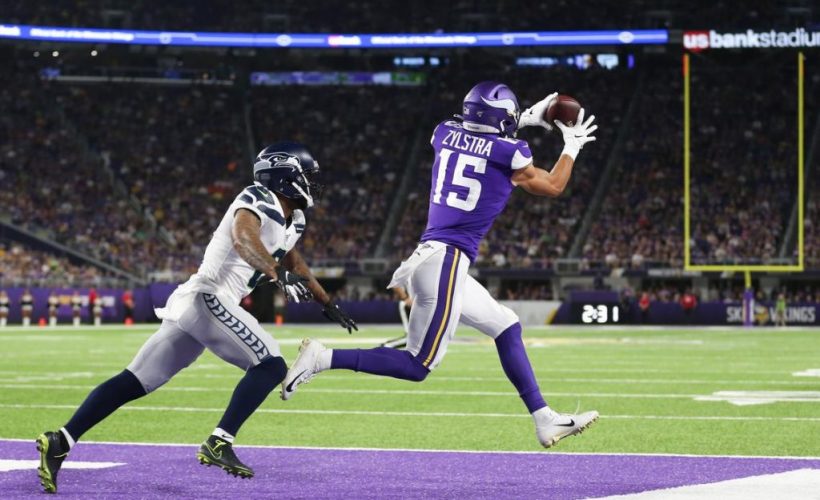 The Combine Report: Preseason Week Two – Zylstra Was Perfect, Smith Gets Into The Endzone

The NFL preseason reveals many things about players. Their preparation, discipline and dedication. There are several standouts from the NFL Regional Combine stage who are exhibiting those traits. And Minnesota Vikings wide receiver Brandon Zylstra is one of the best examples.

“I think the explosiveness is starting to come back a little bit for him,” said Vikings head coach Mike Zimmer, according to Vikings.com. “I thought he did well tonight.”

Zimmer was making reference to Zylstra’s performance in Week Two against the Seattle Seahawks. Zylstra caught all five of his targets, including his first touchdown of the preseason.

In the third quarter with 2:35 remaining, the Vikings were facing second-and-goal from the Saints’ four-yard line. Zylstra lined up to the outside. At the snap, he ran into the inside and broke hard to the outside off Seahawks defensive back Jamar Taylor for the touchdown.

This score for Zylstra was significant after being on the Active/Physically Unable to Perform List at the start of training camp.

“I’m finally starting to feel more comfortable out there, kind of coming off that injury,” said Zylstra. “I felt like I was really slow at the beginning of camp and now I’m getting into that rhythm.”

Zylstra looks sharp in all his movements. The Vikings had Zylstra all over the field, moving him from the inside and out. Zylstra snatched each pass that was near him and moved effortlessly.

Zylstra ventured through the NFL Regional Combine process in 2016, just like fellow teammate and All-Pro receiver Adam Thielen. With a solid, competitive grouping of pass catchers on the Vikings’ roster, Zylstra is maintaining his stake among the talents.

To potentially have two RC pioneers lining up side-by-side by the season, and being effective, will be something special for the platform. But for now, Zylstra is looking to improve and perfect his craft.

Speaking of Thielen, he is already in midseason form. In the first quarter with 4:58 left from their 15-yard line, facing third-and-5, Thielen beat Seahawks cornerback Shaquill Griffin on a deep out for a 34 yard gain.

To not be out done, Vikings fullback C. J. Ham ran fast and played physical. He finished with two carries for eight yards. There were a couple of times Ham lined up to the outside. That will be something to watch out for.

SMITH, AND THE TEXANS TANDEM?

The Houston Texans have a pair NFL Regional Combine pioneer receivers as well in Vyncint Smith and Tyron Johnson.

Smith is entering his second season with the Texans. Smith was not used as much last season, but when his number was called, he often stepped up. Smith definitely exemplifies preparation, discipline and dedication. Now that he is fully implemented into the NFL culture, this should be a lights out season for the Limestone College product, and it already has shown this preseason.

On second-and-9 from the Detroit Lions’ 31-yard line with :48 second left in the half, Smith was wide right of the field. Texans quarterback Joe Webb threw deep down the right side of the field to Smith.

Smith beat the press coverage from Lions cornerback Dee Virgin and sprinted up the field. He got behind Lions safety Andrew Adams at the back of the endzone and hauled in a 31-yard, toe-dragging touchdown.

“It’s just a good throw by Joe, giving me a chance in our two-minute offense, just going out and making a play,” said Smith. “He barely just tipped it, knocked it a little bit off track. Joe threw a good ball. He gave me a good chance to make a play.”

The Texans are deep with playmaking receivers and Smith is making a statement that he can make plays in the regular season.

Texans rookie receiver Tyron Johnson is attempting to make a statement as well. He had a reception for 16 yards.

On the defense, Texans rookie safety Chris Johnson was flying around to make stops, He recorded five tackles. Linebackers B.J. Bello and Tyrell Adams played well. Bello finished with three tackles, while Adams had a stop.

McGOUGH TO THE HOUSE

Jacksonville Jaguars quarterback Alex McGough bounced back after facing the Baltimore Ravens’ defense in Week One. Against the Philadelphia Eagles, McGough not only got the job done with his arms, but also his legs.

The Eagles were looking to pitch a shutout out of the endzone. With 9:09 left in regulation, the Jaguars were facing fourth-and-goal from the Eagles’ four-yard line. When McGough snapped the ball, he was under immediate pressure. He sprinted up the middle, bounced to the right to get to the outside and dived in for the score.

McGough also is a good thrower of the ball. Against the Eagles, McGough demonstrated he can make plays with his legs. His scamper for 17-yards earlier in the fourth quarter was a thing of beauty.

San Francisco 49ers quarterback Nick Mullens threw his second touchdown of the preseason, which came against the Denver Broncos.

With 5:18 left in the contest, Mullens took the snap from center, stepped back and toss a high floater to the right corner post of the endzone to 49ers receiver Kendrick Bourne as he snatched the ball high from Broncos cornerback Shamarko Thomas for a one-yard touchdown.

Week Three will be major as the majority of the starters will play. Still, many of the NFL Regional Combine pioneers will have significant performance time.