Week 1 of the NFL preseason is in the books, and this year’s assets of NFL Regional Combine turned heads with impactful plays as they are making strong cases to achieve roster spots.

The Steelers overall performance against the Jaguars was night and day compared to their preseason opener against the Minnesota Vikings in the Hall of Fame game.

But no one had a better turnaround than wide receiver C.J. Goodwin. Goodwin struggled against the Vikes as he had two catches, one he lost due to a fumble. Against the Jags, the product from California, PA hauled in two receptions. One of those passes resulted into a 4-yard touchdown.

With 4:51 remaining in regulation, the Steelers were faced with second-and-4th on the Jags’ 4-yard line, Goodwin ran an underneath route across the middle and took a huge shot from Jaguars safety Matt Daniels while securing his first NFL touchdown.

Goodwin is getting adjusted to the speed of the game and his confidence is increasing each day.

“I have to keep working hard,” said Goodwin, according to Steelers.com. “I have to learn what is going on in the offense and make sure I don’t have too many mental errors.
I learned about securing the ball more.

“The speed of the game. It was much faster than I anticipated. It slowed down for me this game. I have more confidence than anything,” Goodwin added. “Last year I was out there with no confidence. I am gaining confidence each day.”

Phillips had a reception for 12 yards and Murphy had two catches for 17 yards.

Hybrid running back Jawon Chisholm carried the ball seven times for 13 yards and received the ball on three occasions.

Fullback Will Johnson contributed to two passes for 20 yards.

On the defense side of the ball, defensive backs Ian Wild and Jordan Dangerfield each had three tackles.

The Jaguars has two from the RC, and of them is a returning favorite. Punter Kay Redfern had an outstanding exhibition for the Jags last preseason. Unfortunately, he did not make the team. This offseason, the Jaguars brought Wofford University’s finest back and he tallied four punts, one landing inside the 20.

Defensive end Ikponmwosa Igbinosun, his teammates call him “Ike,” finished with a tackle. Igbinosun was a member of the Buffalo Bills practice squad last season. 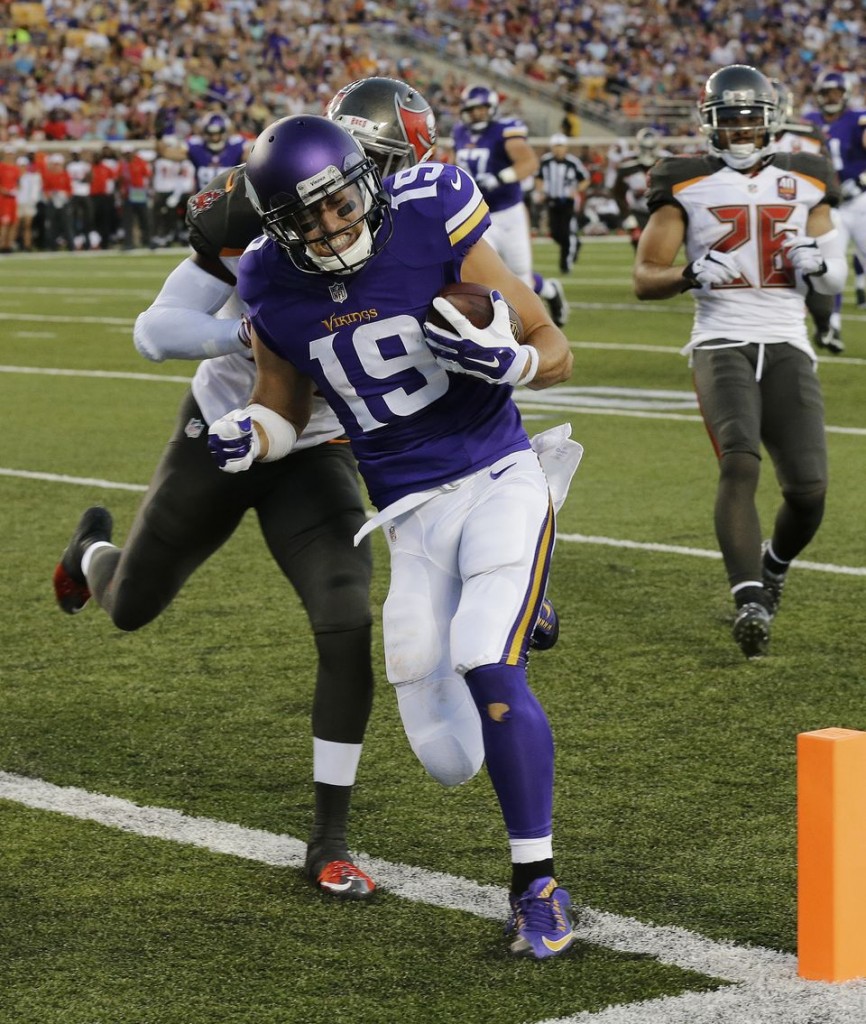 On second-and-6 at the Bucs’ 15 with 3:51 left in the first half, Vikings quarterback Shaun Hill connected with Thielen on a crossing pattern (across the middle) and the Minnesota State-Mankato grad blazed untouched towards the sideline and into the endzone.

Thielen led Vikings receivers in receiving yards with 54 and was active in the return game as he field two punts for 16 yards.

Vikings running back Dominique Williams nearly scored his first career touchdown, but he fumbled inside the Bucs’ 3-yard line with 4:14 left in the third quarter. Clearly, he had a strong showing with six carries for 44 yards, leading all rushers.

The Patriots may have two gems in their mist. Defensive end Rufus Johnson was all over the place with his athleticism and power. Oftentimes, the Tarleton State terror forced ball carriers to run further to the outside, allowing the secondary and linebackers to make plays. Nevertheless, Johnson’s big play came in the third quarter when he destroyed Packers quarterback Brett Hundley for a 10 yard loss in the third quarter with 5:27 remaining.

Week 2 commence Thursday evening. Expect to witness more stars from the platform of the NFL Regional Combine the rise.

0Shares
0 0
Share
Kim Fields Scores A Touchdown For Diversity In The NFL Front Office Previous post
The Combine Report: Preseason Week 2 - Playmakers From The RC Are On The Rise Next post