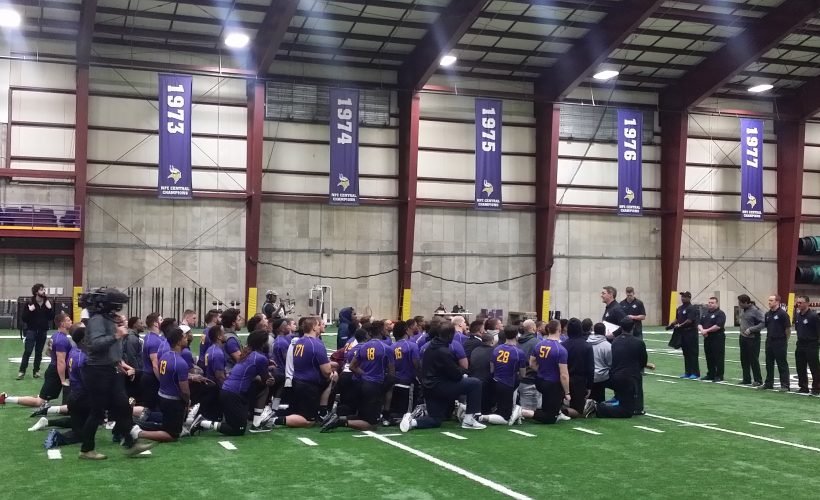 The process of discovering talent is tedious and intense. The thoughts of a NFL scouts, NFL personnel and general managers alike second guess themselves annually about who they may have missed. And all NFL hopefuls believe they can make a living playing football professionally on Sundays.

Enter NFL Football Operations as their NFL Regional Combine platform has a remedy to bring the closure all parties desire.

NFL Draft eligible players from small institutions, including Division II, III and NAIA, look for just an opportunity to showcase their abilities in front of some true decision makers of the NFL.

Since 2012, the year NFL Football Operations invested into the NFL Regional Combine staple, roughly under 6,200 players graced NFL training facilities at these trials to earn opportunity to, at least, be invited to a NFL camp with hopes of achieving more.

Dating back to 2014, 277 made a NFL roster at some capacity. That is 277 NFL hopefuls who may have never wore an NFL jersey.

To further exhaust the process, Historically Black Colleges and Universities (HBCUs), as a whole, do not consistently garner the attention they deserves.

Due to conflicting schedules, no NFL scout showed up to Florida A&M’s Pro Day last year, and they barely showed up in 2018.

FOPs recognized an issue with the lack of participation from HBCU institutions and its players within their format of presenting talents to all 32 NFL clubs.

In terms of HBCUs, there are 44 football programs from 107 institutions. Following the 2014 RC sessions, only 12 HBCU programs were represented, and 16 players signed with an NFL squad at some capacity.

Clearly, the lack of awareness played a role.

Well, not this year nor years down the road.

“HBCU athletes will experience a world-class on-field evaluation of their talent by NFL scouts,” Troy Vincent, Executive Vice President of NFL Football Operations told Locker-Report.com. “In addition, NFL Legends and club personnel will network with these athletes of color and drive awareness of opportunities to be involved in professional football beyond the playing field.

“These are intentional efforts to bring awareness about opportunities for students of color.”

On March 27-29, the NFL Regional Combine and its HBCU Combine will be held in Miami, Florida. The Miami Dolphins will host this year’s workouts at the Dolphins’ Baptist Health Training Facility.

With NFL Football Operations’ involvement in creating this podium, it bring closure. NFL scouts, NFL team personnel and general managers across the league can truly exercise all their options as they all can come to one location after months of traveling around the country covering games, practice and leads.

After the NFL Scouting Combine in Indianapolis and Pro Days, the demons of the “what ifs” will be eliminated with the NFL Regional Combine platforms.

For the players, all they yearn is an opportunity to get in front of some true decision makers after being overlooked. The RC will provide that liberty, and from there, the NFL hopefuls will be in control.

The list of invitees are yet to be determined. However, the 2020 prospects for the NFL International Player Pathway Program will participate in the NFL Regional Combine Invitational.

The sessions will be competitive and the players must be 2020 NFL Draft eligible. Looking to be the best sessions ever.

With certainty as a HBCU combine is established, no creditable talent will be left behind.

NFL Caretakers: The Best Behind The Whistles -Postseason Of Excellence Previous post