Last season, the Arizona Cardinals experienced the true meaning of “next man up” as many players either missed portions or the entire campaign due to injuries. Yet, they were still able to win the NFC West division. Their depth is proven, and wide receiver Ifeanyi Momah and safety Brandon Person are pursuing the opportunity of making the deep roster stronger with their impressive performances thus far in camp.

Both players are from the NFL Regional Combine platform, which the league invested in 2012. Momah ventured through the Tampa-held workouts in 2013, while Person attended the sessions in Chicago earlier this year.

Since 2013, Momah bounced around the NFL as an undrafted free agent as a member of the Philadelphia Eagles, Cleveland Browns and the Detriot Lions. After his stint with the Eagles, the product of Boston College felt a change needed to be made, but didn’t know what to adjust as he struggled to keep weigh. 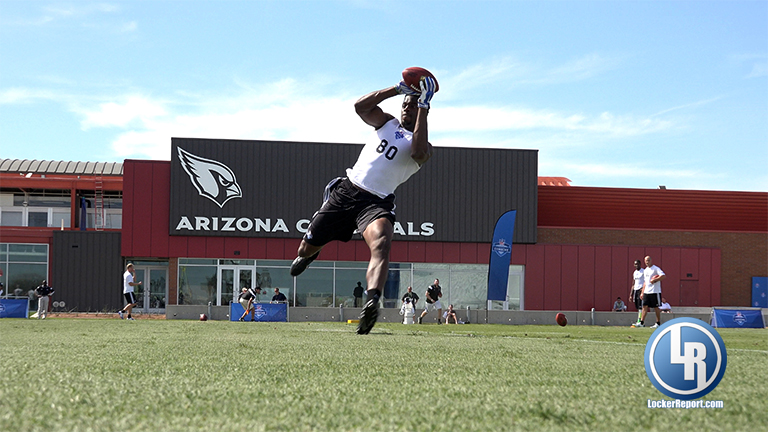 In hindsight, Momah’s agent advised him to become a tight end due to his 6-7, and – then – 240-pound frame. Surprisingly, the Lions acquired the wideout last season as a tight end, and that was the moment of submission for Momah. An appeasement that led him to register for the first annual NFL Veteran Combine as a tight end to get on the radar of clubs.

“I was always a receiver,” said Momah humbly at the Combine in March. “I embraced the change now my agent suggested a while ago. But I knew that I needed to make a change after the injuries and some short comings. But I feel great, better than I ever have been before.”

Fast forward to his signing with the Cardinals, head coach Bruce Arians was truly impressed, despite not knowing how to pronounce his name correctly.

“I can’t say Mo’s real name, but he’s been really impressive…”I’m going to need to learn how to say his name pretty soon because he’s impressing me.”

Standing 6-1, 185-pounds, Person is an aggressive safety who is not afraid of stopping the run. Last season at Tiffin University, Person recorded 73 tackles, 11 pass defensed, a sack, an interception, and three forced fumbles in a 10 game span.

Similar to Momah, Person was not invited to the NFL Super Regional Combine, which is complementary to the NFL National Scouting Combine, but for lesser known and overlooked talent.

Person had a tryout with the Cards last month and impressed the staff enough to sign him.

Both players are currently placed at the bottom of their respective positions’ depth chart. The Cardinals cut their mini-camp short, thanks to their great workouts. With a longer break, Momah and Person will return to training camp more focus knowing they have the Cardinals attention.