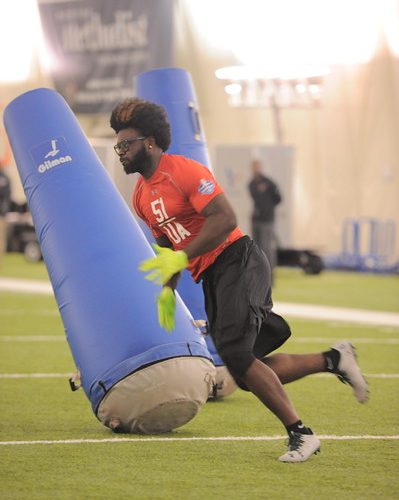 HOUSTON, Texas – When the excitement of Super Bowl LI died down in Houston, the atmosphere of the NFL remained high as the NFL Regional Combine platform came to town. In regards to Super Bowl LI, the RC duplicate the similar output in the first half of the day as the defense owned the spotlight.

Andre Adams of Arkansas-Monticello and DeSean Anderson of Eastern New Mexico clearly were in a pass catching contest. Both players demonstrated great catching ability and bounce. Teammates from Henderson State in Gary Vies and Dondre Wright feed off each other as they elevated themselves in front of the NFL scouts.

Jamal Ellis of Fresno State is instinctively sound, while Evan Scott of Langston is all about “stop, start and go” as he moves fluently with solid ball skills.

Colorado School of MInes is a dynamic institution for engineering. Shortly, they may be known for their football due to Chris Brockman. Brockman is not lights out when it comes to speed, but he is polish. 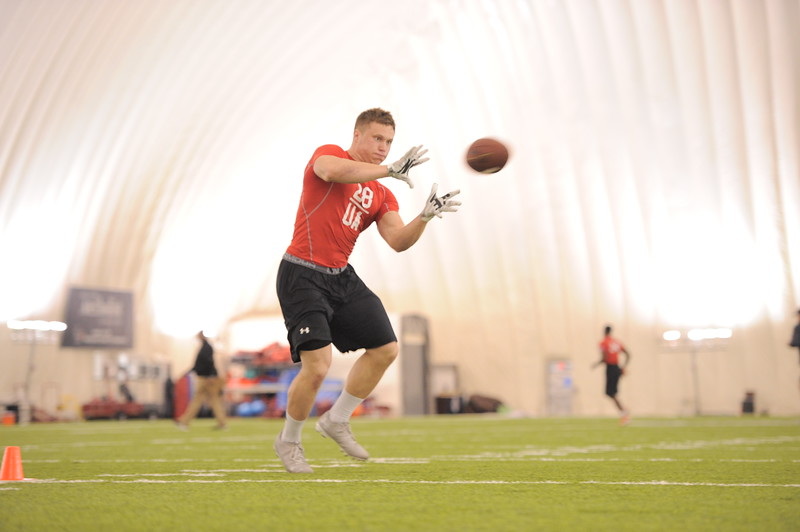 Brockman is fundamentally sound, agile and smart. His ability to understand angles gives him an edge. Despite performing on a high level in Division-II, the 6-0, 225-pound defensive back’s numbers of 95 tackles, six sacks and 14 tackles for losses in his senior year will translate to the NFL.

On his Close and Speed Turn Drill, Brockman displayed good game speed as he bolted downfield and hauled in the deep ball with a spectacular one-handed catch.

Brockman was not alone as teammate Jalen Champagne had a toast of a performance as well. He was a little tense in the beginning, but he settled and demonstrated his solid ball skills, accompanied with good footwork during his individual drills.

“I was a little tense out here earlier,” said Champagne, humbly. “I was trying to prove something to everyone (pause) and to myself. Once I got with it, I realized I’m not in a battle with anyone out here, it’s about what I can do on the field. So, once I got comfortable, I felt pretty good.” 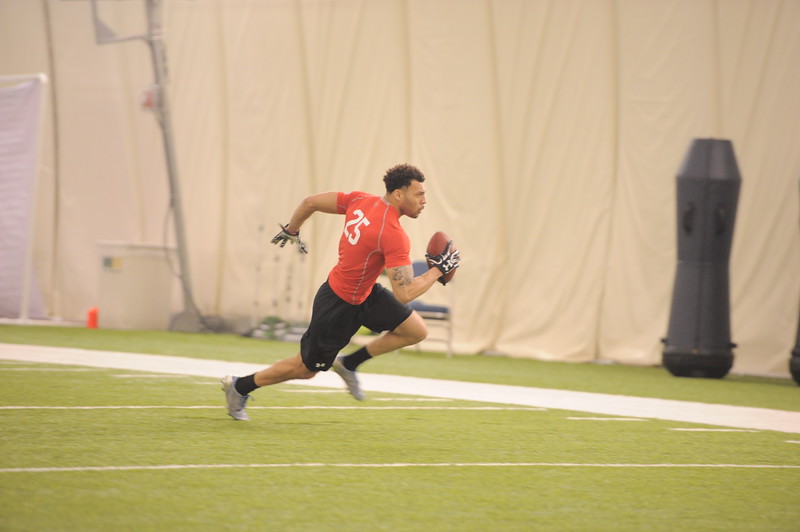 Kevin Wharry of Angelo State is a man of few words, however, his abilities on the football field speak volumes. Wharry is aggressive with an angry style of play and runs extremely hard. Nevertheless, the 6-0, 190-pound defensive back’s aggression towards his passes was impressive.

On his Back Pedal, Break Forward, Speed Turn and Catch Drill, Wharry snatched the pass out the air, and instead of putting the ball away, he palmed it look a tennis ball while finished the drill up the sideline with a light roar before tossing the pigskin to the instructor in the endzone.

“I have to be aggressive. That’s the only way I know how to play,” said Wharry with passion. “Before I came here today, I worked hard at my technique. I just want to maintain, and keep striving.”

While Wharry takes a fiery approach, Forrest Jones of Texas A&M-Kingsville is flat out smooth. Jones runs hard, but moves effortlessly. The standout from Houston possesses strong hands and has great tracking skills. Jones was profound in executing passes with his hands and not allotting the ball to touch his body.

From top to bottom Jones could be a steal for any club in the NFL. 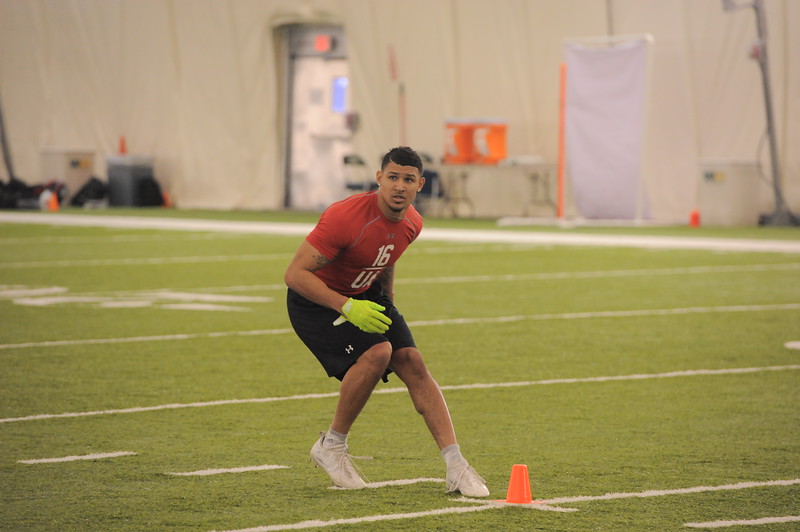 “In college, I felt teams tried to challenged me, so I tried to make them pay for by getting my hands on the ball and get picks,” replied Jones when asked if teams attempted to go away from him during his collegiate career.

“I feel like I’m naturally catching. I played wide receiver in high school. I feel like I have natural hands and I like catching the ball and getting picks.”

The linebackers came to work. Jones’ teammate, Quentin Parks turned some heads and George Stone III of Stephen F. Austin showcased his ability to be a potential player on the next level.

KyRandall Smith of Saint Mary is crazy fast and explosive. The fluent linebacker is balance and can get low. His ball skills is sharp, but his first step and agility is second to none. 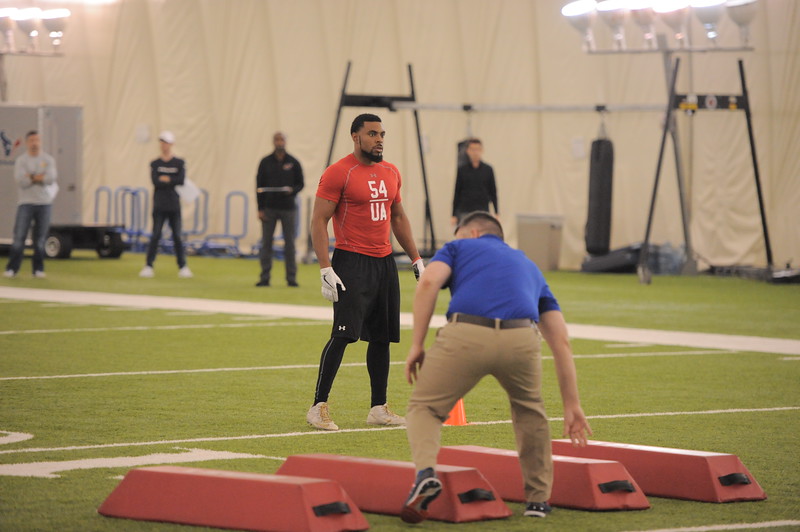 Supported by his brothers and sisters, mother Teresa Grice and grandmother Brenda Grice and along with the love for his late-grandfather Luther Grice, Teron Fitzgerald of Texas State had a performance his family can be proud of. He is quick for his 6-4, 227-pound frame and is explosive off the snap.

Nearly after each test and drill, Teidrick Smith would yell “yes sir” following a good exercise. Smith is explosive and possesses great strength. With balance and control, he handled himself well during his Pass Rush Drills, left and right.

“Coming from the NAIA, and I wanted to let him (NFL scouts) know I can play,” said Smith. “Many (people) did not think I could get here, but with work ethic, I showed them I could.” 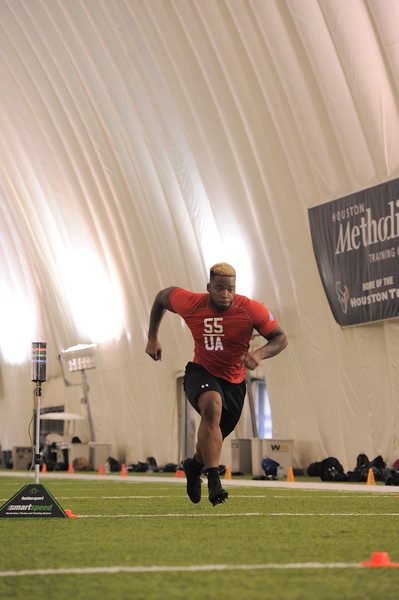 Work ethic is essential for success in the NFL, which is something each player must have embedded into their DNA, which is what South Florida’s linebacker Nigel Harris possesses.

To the contrary, Harris is an offensive coordinator’s nightmare.

Harris is fundamental sound with a high motor. He’s not mean-spirited, truly a nice individual.

But Harris is a filthy linebacker who is fluent and strong. Probably Harris’ best asset is his ability to cover as he demonstrated great ball skills.

Harris is a film junkie and coachable. Fortunately, he understands his body and his abilities. Countless linebackers who were labeled undersized succeed greatly in the NFL.

And Harris will not be the last.

“When I study film, I try to get on the field right away to do what I have to do to get better,” said Harris with sincerity. “I like to study players like Derrick Brooks (Hall of Famer) or Lavonte David (Tampa Bay Buccaneers). They are fast type guys, more of the smaller side. That’s not my style of play, being a big 240, 250 type of guy.

“I use my speed a lot to manage my abilities on the field,” he continued. “I Believe I know where I’m at now and it’s for me to be ready for my Pro Day in four weeks.”

Defensive tackle Jordan Toliver of Central Arkansas uses a similar approach as being undersized. Toliver has an unique skill set as he uses his hands and feet to misconstrue offensive linemen to gain leverage.

Toliver explodes off the snap and is powerful. With great usage of his hands and feet, Toliver excelled in his collegiate career, and as naysayers continues to doubt his effectiveness, he will progress and prolong their frustration.

“That’s (criticism) what driven me the whole time,” said Toliver. “I use my hands well and get underneath O-linemen to help get leverage and get them up instead of them getting under me.”

“I used today to see where I’m”