The Combine Report: Farmer Could Be A Steal, Along With 3 Others, For The Cowboys From The RC

The Dallas Cowboys are not strangers in the hunt for overlooked talent. Dating back from wide receiver Drew Pearson in 1973, defensive back Everson Walls in 1981 and current kicker Dan Bailey, the Cowboys managed to find some undrafted Lone Rangers here and there. Not to mention, their franchise quarterback Tony Romo was signed as an undrafted free agent in 2003.

Clearly, the Cowboys are not known for finding gems consistently, but that may change due to the list of undrafted skilled athletes they signed, especially among the NFL Regional Combine (RC). 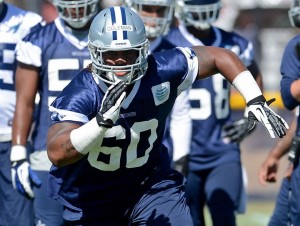 Defensive tackle Davon Coleman made the active roster as a rookie last season, and started against the San Francisco 49ers in the season opener. Coleman attended the Miami-held NFL Regional Combine in 2014, and later, was invited to the NFL Super Regional Combine (SRC) which was showcased in Detroit.

Unfortunately, Coleman struggled against the run, and at times, appeared to be out of place. Fortunately, the staff sees greatness in the Arizona State graduate. Coleman was, eventually, signed to the practice squad with hopes of a better 2015 campaign.

Coleman is stronger and more aware of his responsibilities on the field. The Cowboys expects the 6-2, 295-pound D-lineman to be more effective out the gate to either provide the depth they desire or to help fill slots due to suspended key players.

The Cowboys probably have the best offensive line in the NFL. With the addition of offensive tackle Shane McDermott, the Boys’ O-line may become the deepest.

McDermott shined on the stage of the Miami-held RC this year with his mobility and techniques. The Miami Hurricane started 36 games and, in his senior year, he earned All-ACC praise from the coaches of the conference. McDermott attended the SRC in March and performed well enough to turn heads.

Wide receiver George Farmer could be a major sleeper in Cowboys’ camp. The uniquely talented receiver from USC cut his collegiate career short, despite sustaining an injury-riddled junior campaign. Farmer had scouts and analysts scratching their heads as to why the 6-1, 220-pound receiver would jump to the NFL after a rocky output as a Trojan. 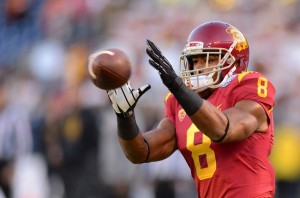 “It’s hard to believe when someone who wasn’t good enough to start in college decides he’s ready to play in the NFL,” said NFL Media senior analyst Gil Brandt, according to NFL.com.  However, 4-3 speed will make scouts change their mind as Farmer clocked those numbers at his Pro Day as USC. Apparently, Farmer was expecting an invite to the NFL National Scouting Combine. Instead, he had to attend the Denver-held Regional Combine, which he was not as pleased.

Disappointed or not, Farmer attacked the Combine furiously and earned a spot with the selected few for the NFL Super Regional Combine.

Due to his Pro Day showing, Farmer did not attend the SRC. After being counted out as once a five-star recruit for USC, Farmer looks to make a home for himself in Dallas with a disdain taste in his mouth to prove that he made the right decision.

Defensive back Jason Wilson did not receive the honor of an invitation to the SRC. Let alone, was not given the opportunity to dismiss the summons either.  Wilson is taking advance of his fortuity as a potential Cowboy. The 5-11, 190-pound cornerback is aggressive and has a nose for the ball. The pride of Central Michigan signed to the program as a wide receiver, but converted to the corner position in his sophomore season where he made an instant impact.

Wilson attended the Chicago-held NFL Regional Combine in route to a Cowboys’ uniform.

Hopefully, this talented core can help fans echo the words of legendary Dallas head coach Jimmy Johnson, “How bout them Cowboys” once again.