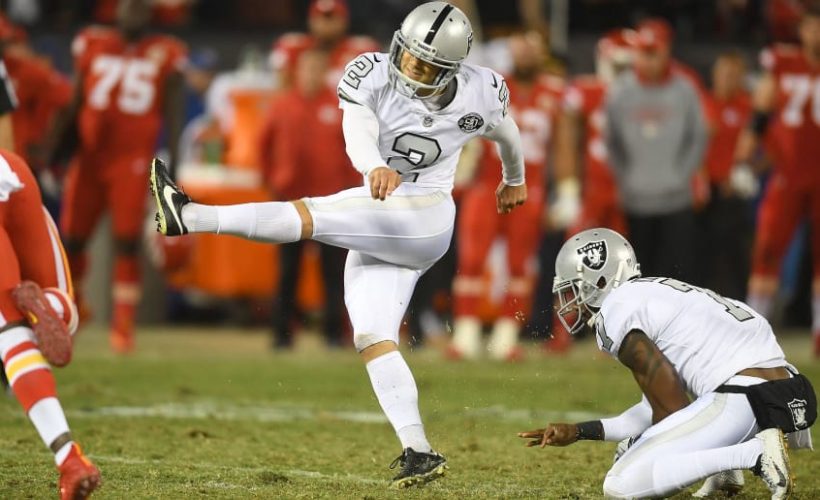 After a solid year with the Oakland Raiders, journeyman kicker and NFL Regional Combine pioneer Giorgio Tavecchio signed a deal with the Atlanta Falcons Monday.

To close out the season and to secure a proven kicker prior to the start of the 2018 NFL campaign, Falcons head coach Dan Quinn believed that this would be the right time to bring Tavecchio in to see what he could do.

“This is something that we had planned for a week or two,” said Quinn, according to the Atlanta Journal-Constitution. “We thought we’d get a chance to get a look at him (Tavecchio). He did an awesome job in the workout with us a few weeks ago. We wanted to get a chance to see him in the game.

“It was good to see Matt (Bryant) kick,” he continued. “He won’t kick on this Thursday. We thought this would be the perfect opportunity for Giorgio to come in.”

Tavecchio participated in the 2012 NFL Regional Combine platform and journeyed through league before landing with the Raiders in 2014. The undrafted kicker from Milan, Italy waited behind long time Raider Sebastian Janikowski for his opportunity and last season was his time to shine.

Tavecchio nailed 16 out of 21 field goal attempts, including four spanning 50 yards or more.

He iced the Raiders kicking job when he went five for five, including two 52 yarders, in the team’s season opener in week one last season to ultimately help win the game.

Whether Bryant returns to the Falcons healthy by Week One or not, Tavecchio’s audition for the 2018 campaign begins Thursday against the Miami Dolphins.

LockerTalk Podcast: The Effectiveness Of The New Helmet To Helmet Rule, Week 2 Preseason Recap Next post