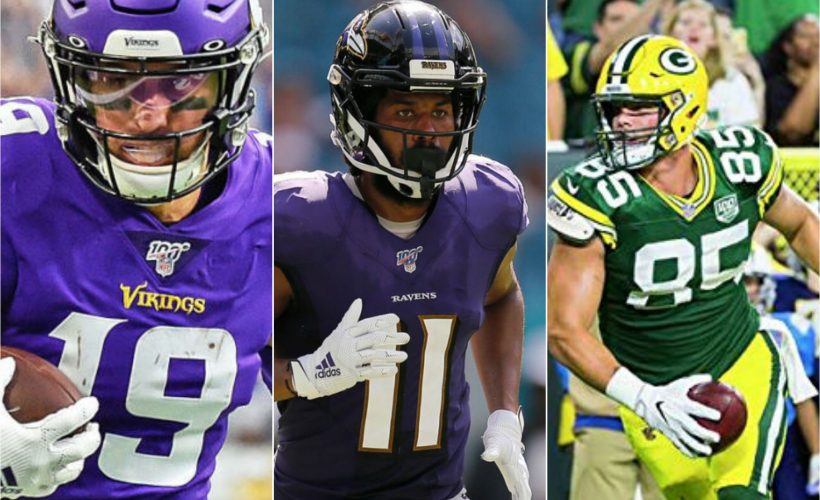 Big plays will be surely needed during the NFL Divisional Round. As the defense rules the outcome of a solid postseason journey, the offense must execute against any challenges that will come its way.

Fortunately there are some NFL Regional Combine pioneers who are hands-on in making the big plays their teams need to advance.

Minnesota Vikings wide receiver, and two-time All-Pro, Adam Thielen will help lead the way for his squad as they travel to San Francisco to take on the 49ers. The 49ers will game plan against the veteran receiver who came through in a mighty way against the New Orleans Saints in the Vikings Wildcard Weekend upset.

Thielen registered seven catches for 129 yards, including the 42-yard strike that set the Vikings up for the eventual winning score inside the Saints’ 5-yard line.

The Vikings will need Thielen to be at his All-Pro form in order to be victors over the heavily favored 49ers. Vikings quarterback Kirk Cousins will look to Thielen in critical situations and down the field opportunity as this matchup will be opportunistic and defensive.

Thielen will be up for the challenge.

Speaking of challenges, the Baltimore Ravens will have their hands full against the Tennessee Titans, a team that mirrors their style – physical.

The Titans are physical both offensively and defensively as a ball-dominate run team combined with a ferocious defensive front. The Ravens will have their chances of throwing the ball and their pass catchers will be challenged.

This is where Ravens wide receiver Seth Roberts comes in.

Roberts has come on strong for the Ravens towards the latter part of the season. The proven possession receiver has been a security blanket for quarterback Lamar Jackson, which was why the Ravens signed him. Roberts is frankly in love with his team.

Through Week Eight, Roberts was involved with the offense, however, he only caught 10 balls for 115 yards and no scores. After Week 11, the veteran wideout who circled the NFL Regional Combine process in 2014 caught 11 passes for 156 yards and two touchdowns.

Against the Titans, do not expect the Ravens to live by their air attack as they are more of a controlled offense. Still, when a play is needed down the field, Roberts is a reliable target. Plus, Roberts is an added value to the running game as a down the field blocker.

Quarterback Aaron Rodgers has been utilizing his young talented pass catchers all season. The majority of which were unknown until Rodgers helped place them into the limelight. Nevertheless, in this Green Bay Packers receiving arsenal there is one special talent that is not recognized among the masses, and that is tight end Robert Tonyan.

“There’s never a question about your dedication to what you’re doing, and that was Robert from Day 1,” stated Rodgers, according to packerswire.usatoday. “And then, when he got opportunities, it’s like, ‘Hey, who’s that dude running down the middle on scout team making plays?’ And it was every single day he’d make one or two plays, and we’re all talking about him.

“Last year, he was the fourth guy to start the season, not talent-wise,” he continued. “The guy is super talented. He has incredible hands. I think he has a very bright future in this league. He’s got a great room. Bobby can be a move guy, a fullback, H-back type guy, and give us a lot of flexibility.

“It’s been fun watching him because he does everything the right way. You can’t help but pull for guys like that.”

Tonyan missed five contests this season. On paper, Tonyan finished his 2019 campaign with 10 catches (15 targets) for 100 yards and a touchdown – all in 193 snaps offensively.

On the field, Tonyan’s talent is completely off the charts and he should be more acclimated in the Packers’ offense because his skill set commands it. Against the Seattle Seahawks, Tonyan can be a factor, if he is purposely targeted. Tonyan’s first NFL touchdown came against the Seahawks in 2018.

Assuming if Tonyan is used, he will come through 100 percent of the time he is made a focal point.

Clearly, all the RC talents, including Vikings full back C.J. Ham, will have all their hands on deck.

LockerTalk Podcast: Despite Injuries, Indianapolis Colts TE, And RC Pioneer, Matt Lengel Is The True Definition Of Perseverance Next post