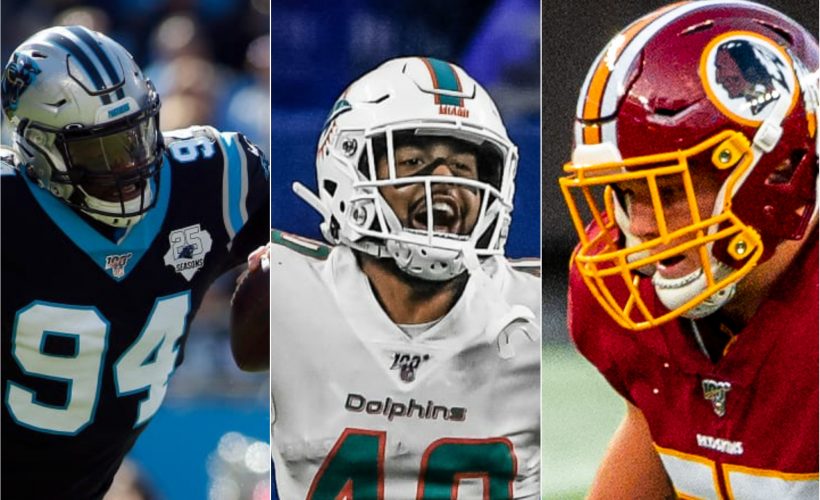 Offense may win hearts, but defense continues to be the winner in this game called football. Defense makes the world go round which is completely evident in the NFL.

Pretenders, led by their offense, always look good during the regular season. Eventually, defenses strip offensive standouts, and fortunately for the NFL Regional Combine platform, it catapulted many pioneers to contribute to defensive domination.

Out of the 70 RC standouts who played in the NFL for the 2019 NFL campaign, 38 of them registered defensively. Many did well, however, a few took the next great step.

As expected, Indianapolis Colts cornerback Kenny Moore II was going to have an excellent season in 2019 showcasing promise of greatness in 2018. If Moore II had not missed the last four games, he surely would have been a Pro Bowler.

As one of the best open field tacklers in the NFL, Moore II recorded 61 tackles, including 2.5 sacks (career-high) and two interceptions. Moore II was paid as one of the top defensive players last offseason and he did not disappoint. Just expect more from him to come.

Many rookies who ventured through the NFL Regional Combine process did not explode on the scene the way Miami Dolphins cornerback Nik Needham performed. Needham made the Dolphins’ practice squad, was promoted to the active roster for Week Six, and started.

Needham missed the start for Week Seven. Following that outing, Needham finished the season as a starter – strong.

Needham racked up 54 tackles, including a sacks, a forced fumble, and two interceptions. Clearly, Needham will be a baller for many years to come.

Now, imagine if New York Jets linebacker Brandon Copeland would have played the entire NFL season. He was all over the field. After missing a quarter of the season due to violating the NFL policy on performance-enhancing substances, Copeland finished his campaign with a career-high in tackles (42).

Copeland was relentless as he got after quarterbacks and stopped the run. The RC pioneer was effective and his big payday has finally come.

New York Jets rookie defensive end Kyle Phillips was no slouch this season either. Phillips quickly learned how to use his body, athleticism, strength and quickness to be effective for an improving Jets squad. As Phillips continues to develop moves to be a playmaker in the defense, his natural abilities will buy him the time to excel.

Compared to the Jets, the Washington Redskins have a NFL Regional Combine dynamic duo on their roster with rookie linebacker Cole Holcomb and cornerback Quinton Dunbar.

Holcomb was a beast and he is destined to becoming an All-Pro. He quickly understood how to play the angles in the NFL, made the right calls often and solidified himself as a leader for the foreseeable future. Holcomb was one of the top tacklers in the NFL, and led the RC platform, with 105, including a sack and three forced fumbles.

Look for Holcomb to repeat his excellence time and time again.

Dunbar was recognized as a midseason All-Pro with one of the highest ratings during the season, per Pro Football Focus. Nevertheless, injuries hampered his opportunity of garnering a Pro Bowl spot for the first time.

Still, in a short time, Dunbar has gained respect from his peers and opponents. The converted wide receiver finished with 37 tackles and four interceptions, a career-high.

The Las Vegas Raiders were one of the surprising teams in 2019 as they contended for the AFC West division entering Week 12. Defensive end Benson Mayowa was one of the reasons.

Mayowa had a career-high seven sacks as he is quietly becoming one of the best edge rushers in the NFL. Mayowa has been getting off the snap quicker and he is being recognized as a legitimate problem for quarterbacks.

Mayowa posted 15 tackles, including three forced fumbles, on the season.

Atlanta Falcons safety Kemal Ishmael has been a reliable veteran for several seasons, all with one team. From being an active starter, backup, special teams ace to wherever he can fit, Ishmael never complained. He just performed. Injuries creates opportunity and Ishmael stepped in and produced.

With 44 tackles, including a forced fumble, on the season, Ishmael may have stated that he can not be a forgotten talent who has creditable play to offer.

After being a stable, dependable backup for a couple seasons, Chicago Bears defensive end Roy Robertson-Harris was finally thrust into the starting lineup. Robertson-Harris’ achievement was well deserved and he jumped out the gate as if he was a starters for years.

Robertson-Harris had a career-season with 30 tackles, including 2.5 sacks.

There are a few things about Robertson-Harris that are important and expected. He will play to the whistle on a high motor, will be a starter for many years to come, and he will get his hands of Green Bay Packers quarterback Aaron Rodgers each year.

Coming up from behind Robertson-Harris is fellow teammate and RC standout defensive tackle Abdullah Anderson. Following his rookie season in 2018, Anderson made the active roster and hauled in four tackles, including his first NFL sack in Week Seven against the New Orleans Saints.

As each season proceeds, Carolina Panthers defensive end Efe Obada is getting better in understanding the game and executing on the field. Obada had a career-high in tackles with 24. The international sensation who ventured through the NFL International Player Pathway Program in 2017 signed a one-year deal in January. At his skill set and desire to improve, the best is still to come for Obada.

“I’m very grateful. It’s another opportunity to contribute to the team and obviously support myself and my family,” said Obada, according to panthers.com. “The main thing for me is being consistent and trusting my training.

“I’m going to work on my weaknesses – knowledge of the game, just recognizing things a bit quicker in terms of my keys against the run and things like that,” he added. “I definitely want to step into a more secure role, into a leadership role on this team. That’s what I’m working toward.”

The quality of play from the NFL Regional Combine pioneers has improved dramatically. Quantity is great, but productivity provides the quality the NFL expects.

And these talents will continue to carry the torch of excellence for seasons to come.

The Combine Report: A Year To Remember For 2019 - Offense Previous post

NFL Caretakers: The Best Behind The Whistles -Postseason Of Excellence Next post