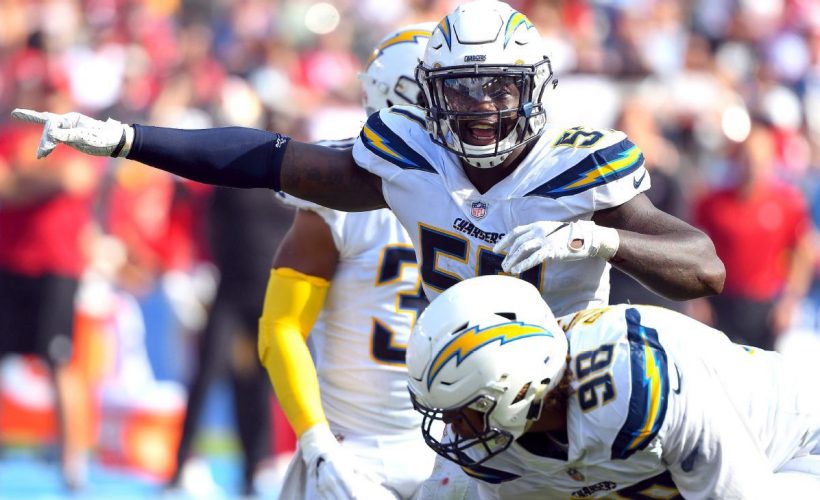 The Combine Report: A Year To Remember 2018 – Defense

Since the start of the NFL Regional Combine platform, defensive standouts carried the stage with excellence. And despite the success of the offensive pioneers from the platform, the defense continues to represent the RC as a high standard.

The 2018 NFL season was compiled with a few familiar names. But, for the most part, many players made a name for themselves and secured their careers.

Out of the 82 RC participants who are in the NFL, 35 players contributed to bringing the pain.

There were several first time situations for players, which means 2018 was just the beginning. 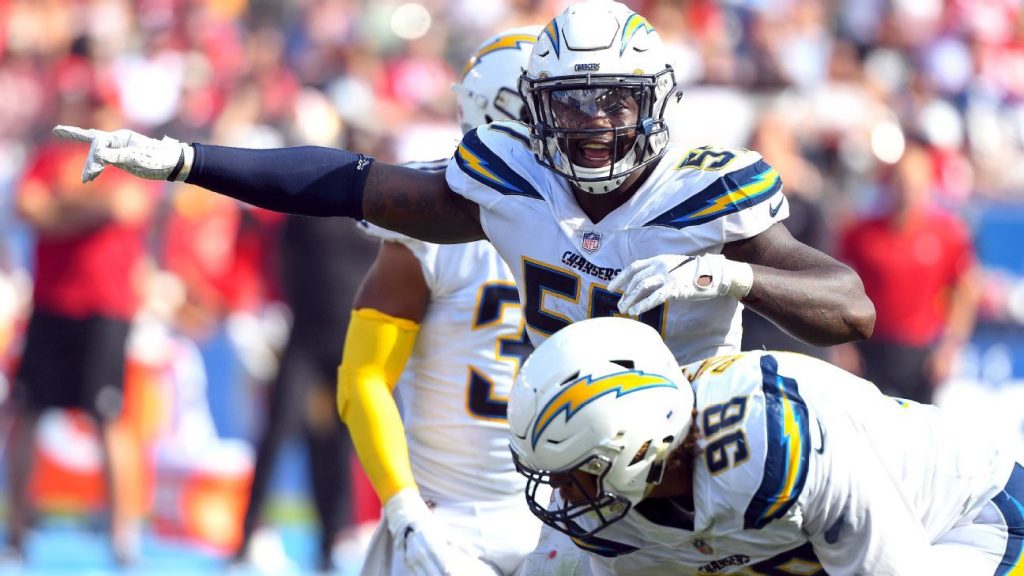 The Los Angeles Chargers were one of the teams that turned it up defensively. In the middle of the attack, linebacker Jatavis Brown was a load.

Brown does not garner the attention and bright lights like several of his teammates, but his leadership as the quarterback (on-field playcaller) for the defense is greatly appreciated.

“He (Brown) has versatility,” stated Chargers head coach Anthony Lynn, according to ESPN. “He plays Mike (linebacker), he plays Will (linebacker). He comes in and plays nickel, he plays dime.

“He knows the defense very well and we were very fortunate to have someone like him on our team when Denzel (Perryman) went down, and we could just plug a guy in.”

After a promising rookie season in 2016, as the Chargers’ team leader in tackles, Brown was on the radar as one of the young rising stars in the NFL.

However, when Gus Bradley signed as the Chargers defensive coordinator in 2017 and switched the defensive back to a 4-3 scheme, Brown struggled with the system

What a different a year makes.

Once appeared to be an afterthought, Brown prospered in Bradley’s 4-3 defensive scheme and became a major player this season.

“I think another year in a system you’re seeing him (Brown) play faster,” said Bradley. “… He’s always been fast, but the ability to recognize and react quicker than he has in the past, I think that’s really been evident for him.” 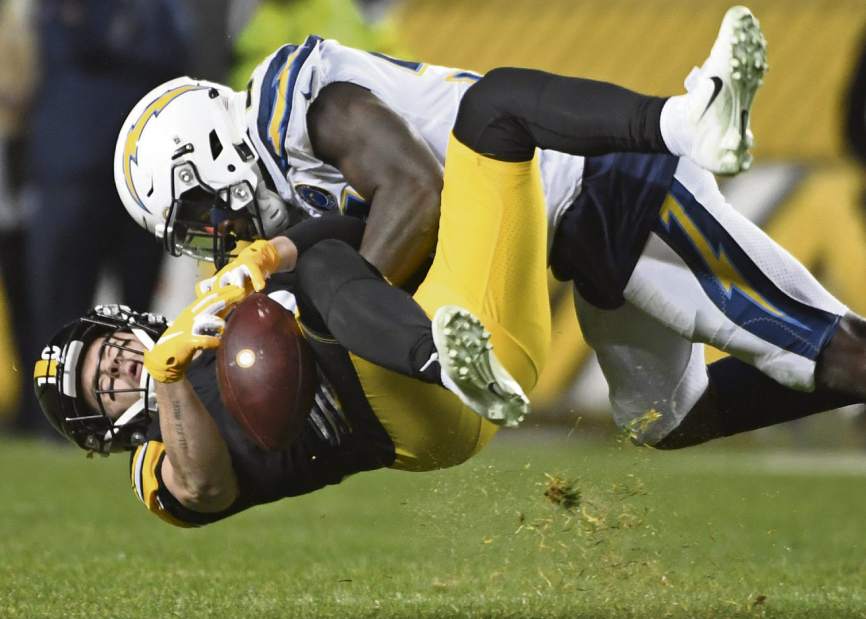 Brown finished the last two seasons with 76 tackles. This season, the 2016 RC participant had a career year with 97 tackles (third most on the team), including a sack, a forced fumble and five passes defensed.

“Just getting that full year under my belt in studying myself last year, it really helped,” said Brown. “I feel more comfortable and know what to anticipate because I know the system.

“Everybody has a full year under this system, so everybody is playing at a much higher level right now.”

Philadelphia Eagles linebacker Kamu Grugier-Hill did not compile the numbers like Brown, still, he had a solid year as a captain of the defense.

“It kind of honestly caught me by surprise a little bit,” voiced Grugier-Hill to KHON2’s Rob DeMello. “The coach handed out sheets and asked for the team to vote, and for my teammates to vote me as a captain, man.

Grugier-Hill registered 45 tackles, a forced fumble and his first career interception, which came against the New York Giants in Week Six.

Clearly, Grugier-Hill is on pace to be one of the best in the league. 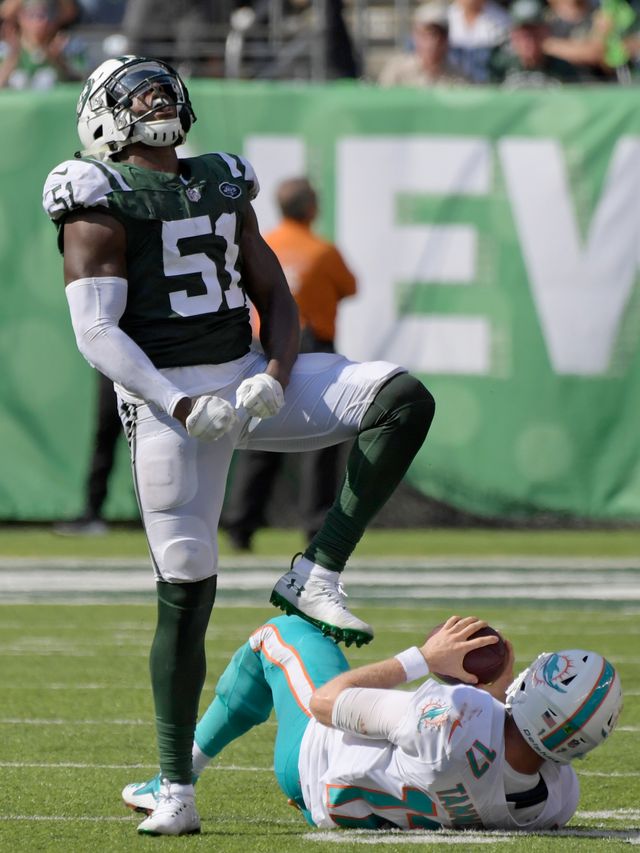 New York Jets linebacker Brandon Copeland made a strong case for his NFL career. The 27-year old Maryland native had his best season as a pro, racking up 35 tackles, including five sacks. After paying his debts as a special teams specialist, Copeland proved that he can be a staple for a defensive unit.

Just as Copeland, Buffalo Bills linebacker Julian Stanford paved his way through the league via special teams to having a solid output this season with career bests across the board. He finished 15 tackles, including his first career sack which came against the Chicago Bears in Week Nine, and a forced fumble.

Among the defensive backs, Indianapolis Colts cornerback Kenny Moore II was the cream of the crop for the 2018 NFL campaign. 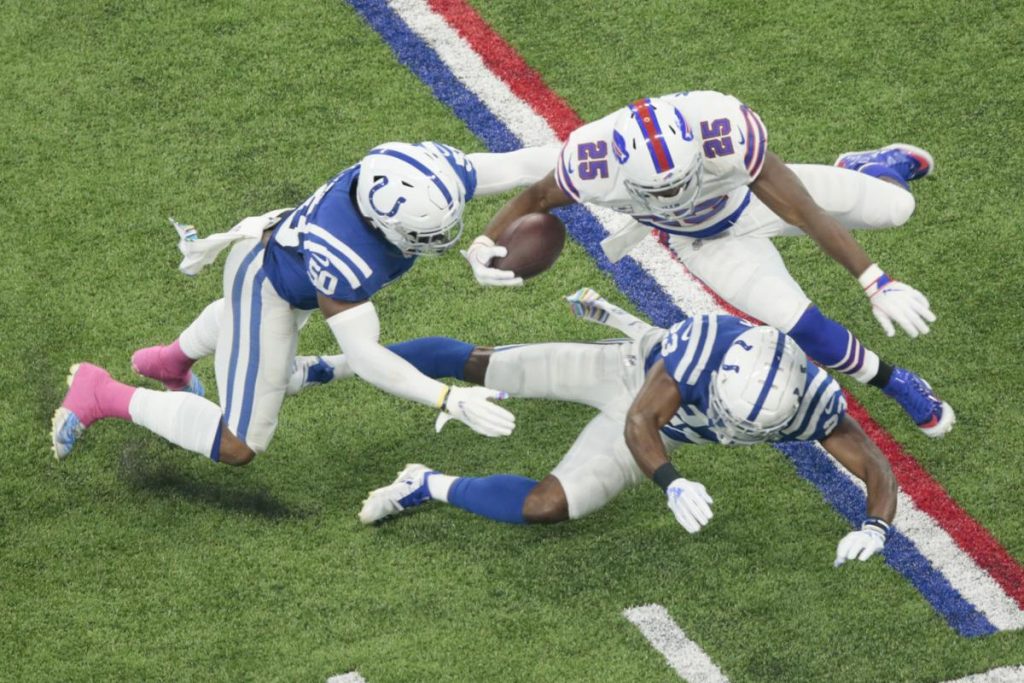 Moore II was consistence all season as he was physical against the run and in zone coverage, and covered well over the middle.

“Kenny (Moore II) is just, he’s just so tough,” said Colts head coach Frank Reich. “This guy is mentally tough. He just grinds it out. He takes every rep in practice, he just works hard. He represents everything we want in our team.”

“He is a gritty, tough, scrappy corner and that’s exactly what we are looking for really in all of our defensive backs and our defensive players,” echoed Colts defensive coordinator Matt Eberflus.

Following his stint with the New England Patriots in 2017, Moore II found a home in Indy.

“The transition from there (New England) to here was extremely fast and it was a learning point where I got to play on special teams all year and then got my chance on defense,” said Moore II. “I really tried to increase the trust they had in me within the system and within the organization. To be here from where I was a year ago, I knew it was in the cards, but I didn’t know I would be starting right now.

“I told myself just to continue to work hard, and leave it up to God and the people that run this organization.”

Moore II led the Colts with 77 tackles, including 1.5 sacks, a forced fumble and three interceptions, and 11 passes defensed.

Banjo went on to record two interceptions, a career-high for a season.

Cornerback Quinton Dunbar started the season off strong for the Washington Redskins. At one point in the season, Dunbar was ranked as the seventh-best corner in the NFL, according to Pro Football Focus. 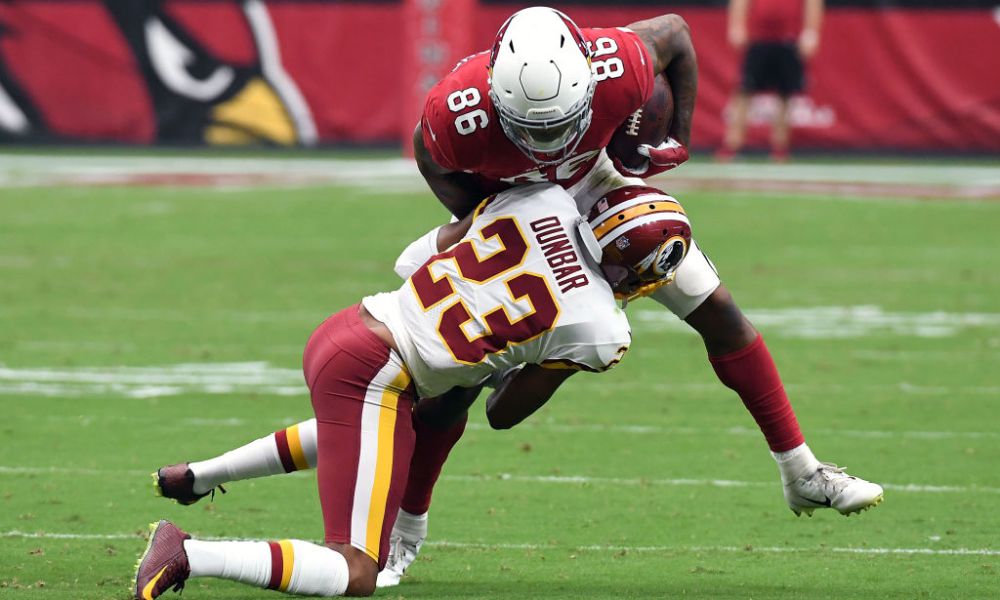 Toward the mid-part of the season, Dunbar got banged up, which led him to finish his year after Week 13. The converted wide receiver amassed 39 tackles, two interceptions and nine passes defensed.

C.J. Goodwin finished with a tackle.

Quietly, Arizona Cardinals defensive end Benson Mayowa was relentless, always on an attack. The Cards did not have their best year, but Mayowa had a solid season. Mayowa finished with 38 tackles, including four sacks and a forced fumble. 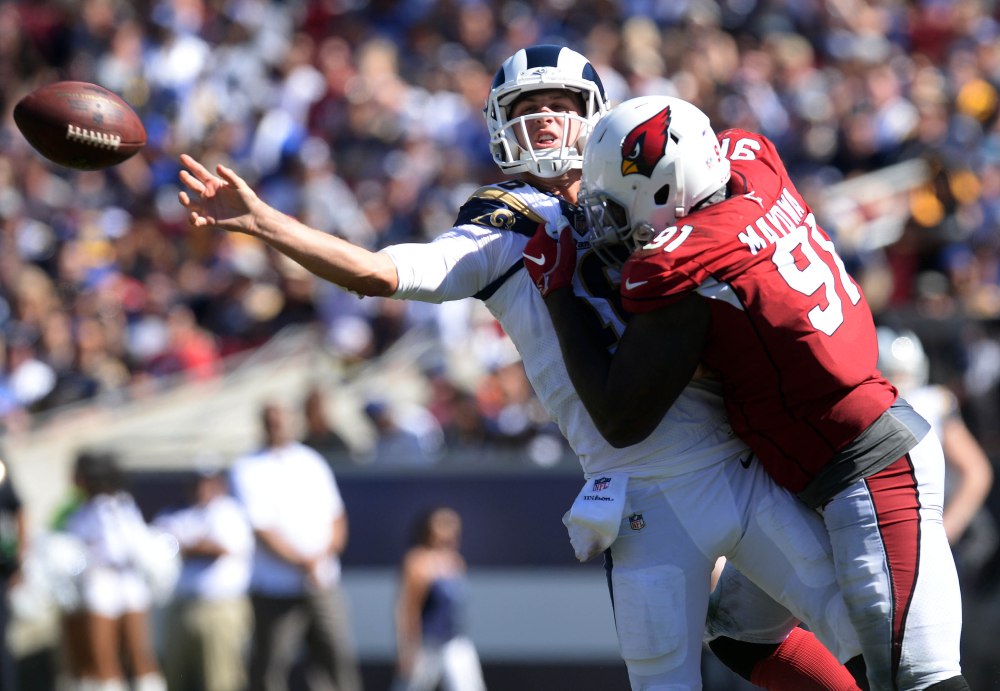 For the Chicago Bears, defensive tackle Roy Robertson-Harris played a major factor in the trenches, which allowed the likes of Khalil Mack and Danny Trevathan to play freely. Mack nearly ended the Green Bay Packers’ season before it started when he took down quarterback Aaron Rodgers in Week One.

Robertson-Harris played with more confidence this season, and is looking to do more to help improve the Bears’ defense next season. He finished with 22 tackles, including three sacks.

“I definitely feel more comfortable than I did a year ago,” said Robertson-Harris. “OTAs a year ago, preseason, I was still trying to get used to the defense. (Having) played a whole year in the defense, I know what I’m doing. At this point, I’m just working on technique stuff to be in the best position to make plays and be a part of a good defense.”

The UK was well-represented this season with several players who ventured through the NFL International Player Pathway program. And Carolina Panthers defensive end Efe Obada proved the value of the international platform.

Obada is the first player from the IPP program to make a 53-man roster and he made the most of his opportunity. In the 10 games he played, Obada recorded eight tackles, including two sacks, and an interception.

Obada made headlines in Week Three when he blitzed the Cincinnati Bengals for a sack, forced fumble and an interception. Due to his performance. Obada earned his first game ball. 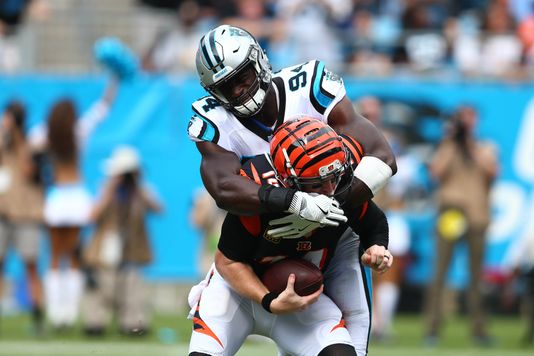 After battling injuries and time on the practice squad, Miami Dolphins defensive end Jonathan Woodard finally had his coming out party. His decent performance allotted him 10 tackles, including his first career sack.

The defensive standouts continue to make this platform a great tool to filter out NFL talents, and it is just getting started.