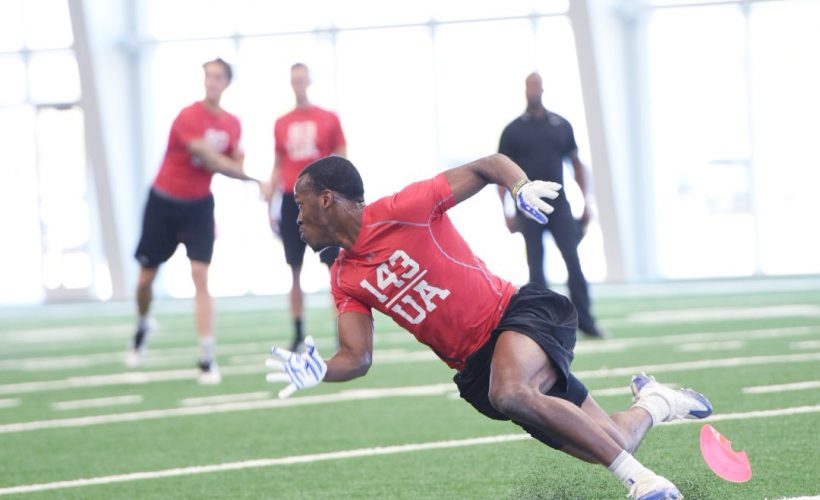 The RCI Players With The Discipline Needed For The AFC East

In addition to utilizing the NFL Draft to solve an immediate need, teams look to the selection process to build depth and construct a solid roster of teachable, hungry players. This is why the NFL Regional Combine platform is significant.

The NFL Regional Combine became an invitational this year with sessions that were notably shorter in order to showcase more quality athletes. While the RCI trials went well, the true success of the 2018 class will ultimately be determined by the performance of those participants selected to play in the NFL.

An NFL team needs to build its roster according to the style of its division. Not every football player is suited to perform in certain divisions.

With the 2018 NFL Draft about to commence, let’s focus on the AFC East.

One word describes the AFC East, and that word is discipline.

The New England Patriots have set the standard for this division for over a decade. In order to have any chance of becoming the new “face” of the NFL, the other squads must have players who are disciplined in their skill set and technique and be fundamentally sound.

Check out some of the talents from the RCI who can fit the bill for this division from the later rounds or via phone call.

Peter Pujals – Holy Cross. For any team that needs a quarterback, Pujals will have a legitimate chance of making the squad. The 6-1, 211-pound signal caller has a great touch and zip on the ball. He can make every throw with tremendous accuracy, moving well in and out of the pocket to sustain good vision down the field.

Alex McGough – Florida International. The 6-3, 219-pound signal caller stands tall in the pocket and is one of the best athletic quarterbacks in the 2018 class. McGough has a decent touch over the middle, will not force passes, but is not gun sly. Plus, good feet and vision. 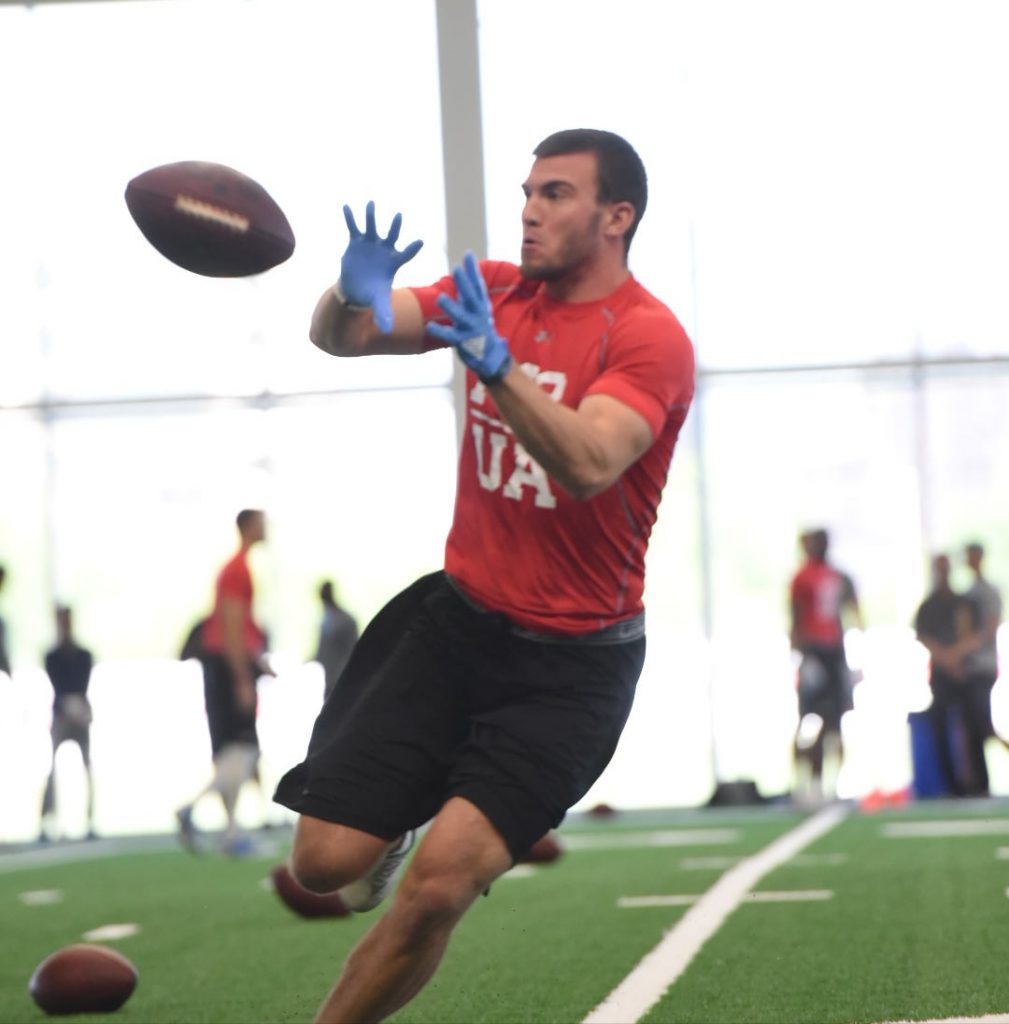 Vyncint Smith – Limestone College. Labeled the fastest man in South Carolina, Smith is a superb route runner with great hands. He cuts on a dime, concentrates on the flight of the ball and is very strong. Standing 6-1, 201-pounds, Smith will be an excellent target.

Austin Proehl – North Carolina. With the ability to play in nearly any system, Proehl can be a Pro Bowler within two seasons with the right team. He has great hands, speed and instincts. Fundamentally sound in his route running as well.

Jawill Davis – Bethune-Cookman. Davis is quick and can be explosive in the return game. He is solid physically as he can bounce off collisions to make a play. And, he has great instincts and good hands and feet.

Mason Gentry – SMU. Gentry is nearly flawless in all his movements. With a quick first step and power, he can lead a ball carrier into the open field. Gentry is extremely physical, has great feet and hands, possesses solid instincts and the ability to play on both sides of the line.

Tony Adams – North Carolina State. The four-year starter can play anywhere on the offensive line. He is powerful, has decent speed, uses his hands well and is always balanced and in control.

Tyrin Holloway – Western Illinois. Holloway is a special talent who has a combination of finesse and physicality. Possessing great hands and solid tracking ability, he is fluid in all his movements and not afraid to bring the pain.

Marvin Hart – Stonybrook. Hart is aggressive, strong and has decent speed. He is instinctive and has the ability to track the ball. Loves physicality. 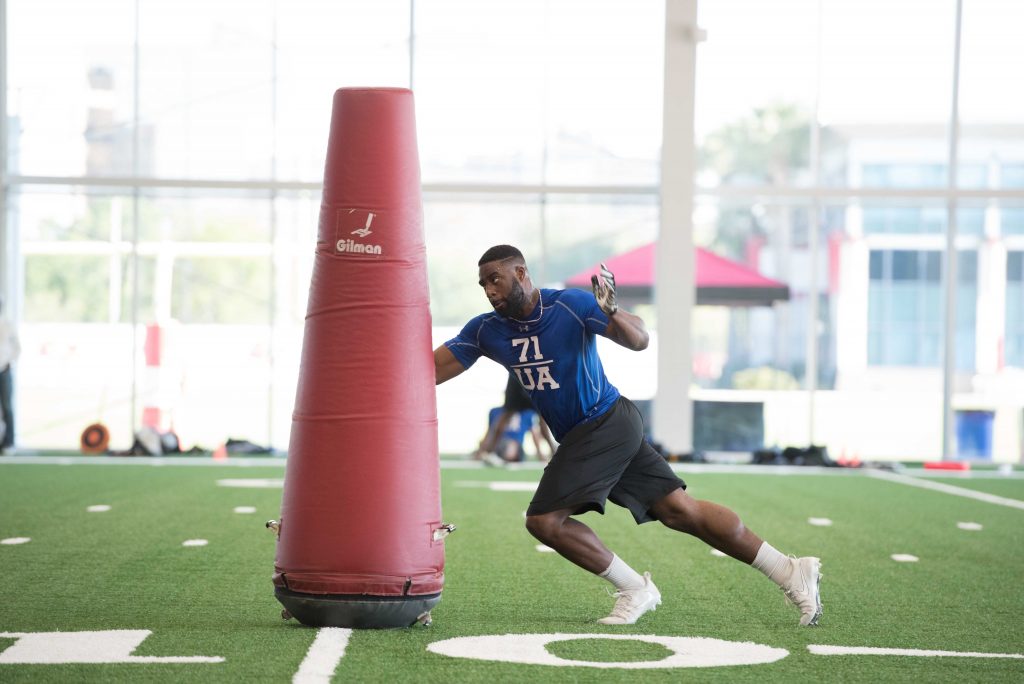 Pat Afriyie – Colgate. Afriyie is explosive off the edge and very polished. He can drop back into coverage if needed and has great leaping ability. The 6-0, 233-pound edge rusher has soft hands. He is physical, instinctive and powerful with great leverage.

Steven Dunbar Jr – Houston. Dunbar is a physical receiver who has the ability to blow by a defender, but would prefer to run him over. He has strong hands and is a disciplined route runner with breakaway speed. A complete playmaker.

Abdullah Anderson – Bucknell. Highly intelligent with great leverage to get to the quarterback or ball carrier, Anderson has an explosive first step, solid technique and strong hands. 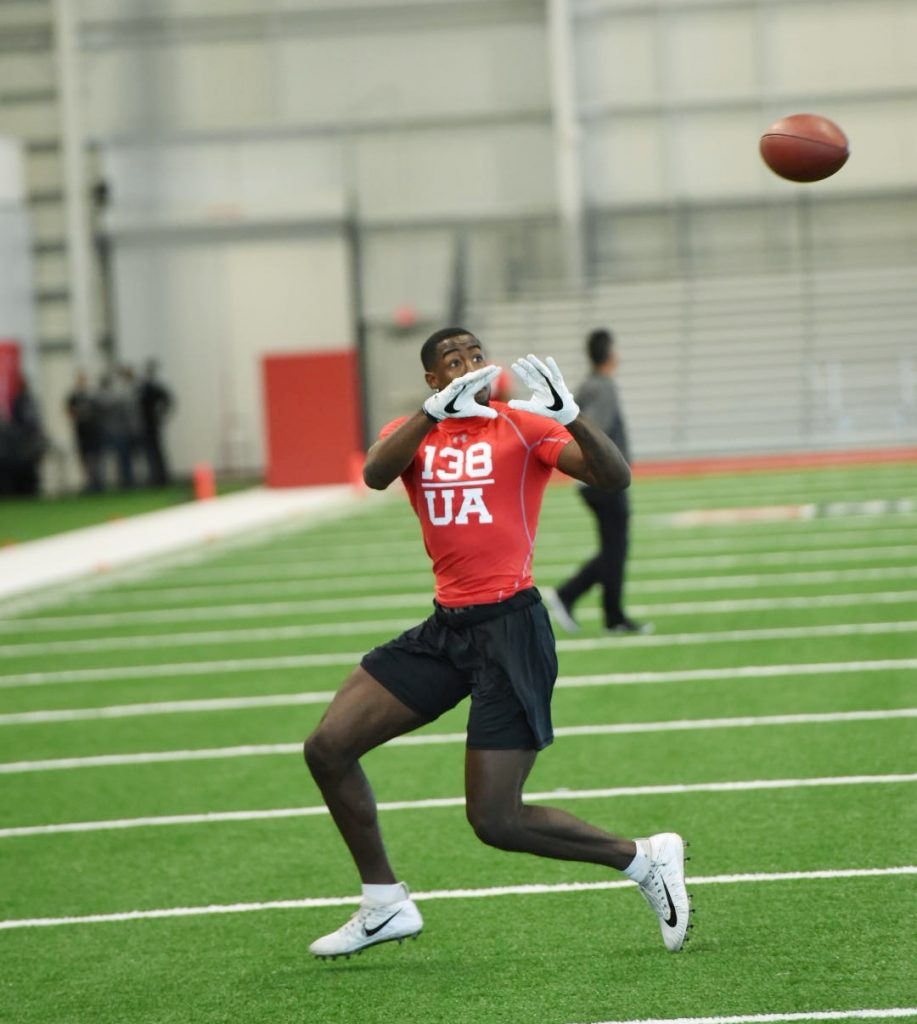 Joe Ostman – Central Michigan. Extremely athletic, powerful, agile and instinctive, Ostman can drop back into coverage to make a play on the ball. In addition to excellent leverage around the edge, he has great hands, superb balance and control.

Kenny Hill – TCU. Athletic and mobile, Hill has a strong arm. He can make plays with his arm and legs and throw into a tight area. The 6-1, 211-pound field general also has a great touch on ball.

John Diarse II – TCU. Diarse is very quick and agile. At 5-11, 214-pounds, he is solid and compact with good hands. Has long arms, good speed, balance and control.

Justin Lawler – SMU. Lawler has a high motor and is extremely aggressive. He uses his hands well; has good balance and control. Very instinctive and good reach and leverage. 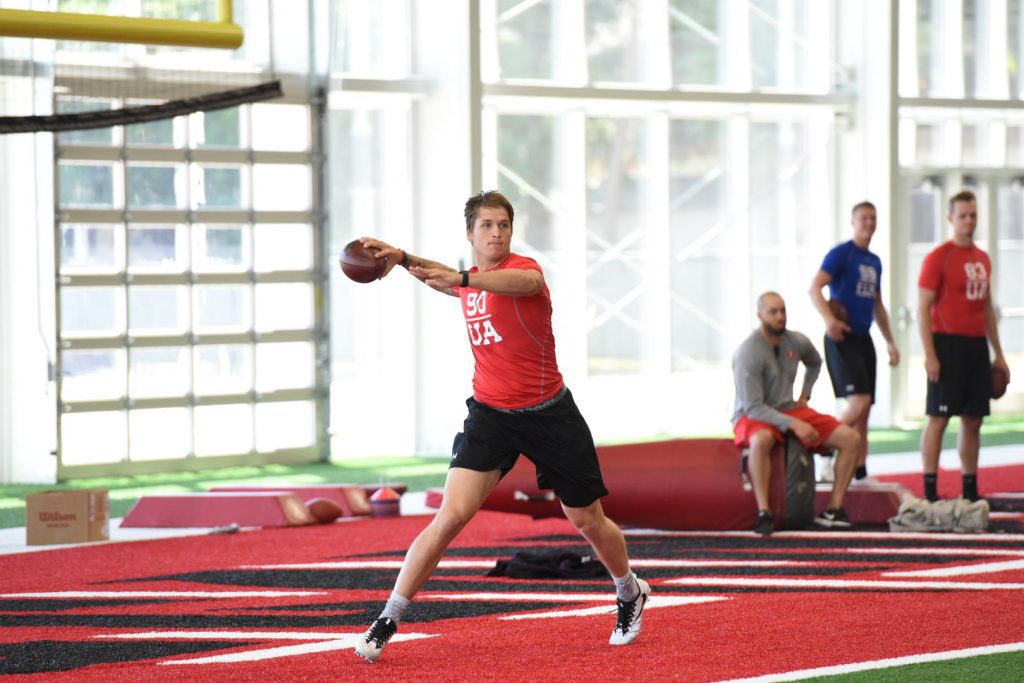 Deatrick Nichols – South Florida. Nichols is highly instinctive and aggressive. Not afraid to make a mistake, he has decent speed and hands and is light on his feet. Quick, tracks the ball well.

Alex McGough – Florida International. The 6-3, 219-pound signal caller stands tall in the pocket and is one of the most athletic quarterbacks in the 2018 class. He has a decent touch over the middle, will not force passes, but is not gun shy. Good feet and vision.

Donnie Alexander Jr. – LSU. Alexander is a sure-tackler who has a nose for the ball. He possesses a quick first step, is balanced, has control and good hands for a linebacker.