The 2011 NBA Playoffs: Why This Heat Team Will Be Their Worst Title Team to Come (via Bleacher Report) 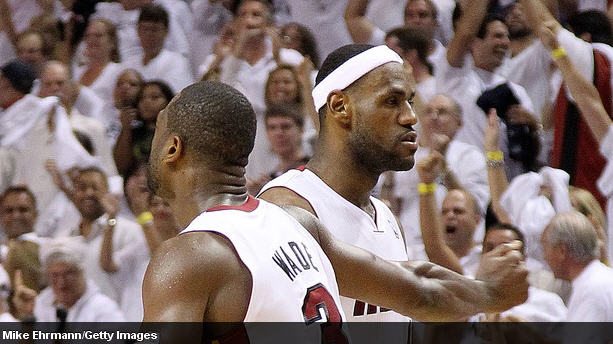 When forward Chris Bosh signed with the Miami Heat and when guard Dwyane Wade re-signed, NBA experts and basketball fans knew that something great was about to start brewing in Florida.

However, when LeBron James stated on television in front of a national audience “The Decision” that he was going to take his talents to South Beach, the basketball world was shocked. James’ decision to team up with Bosh and Wade confounded some, but excited many basketball fans and experts across the nation.

Cohesively, many knew that this three-headed monster was going to win NBA titles, just not in their first season together.

The Heat battled with chemistry issues throughout the season, along with their Dr. Jekyll and Mr. Hyde bench, which provided inconsistent productivity on a nightly basis.

Despite their difficulties this 2010-11 season, the Heat find themselves where they envisioned themselves to be, the Eastern Conference finals. If the Heat, led by The Three, continue their 2010-11 season success through their series against the Chicago Bulls and on to winning the NBA Finals, this Miami squad would the labeled the worst title team among the franchise’s other anticipated championship teams to come.

“It’s (his chemistry with Wade) at an all-time high right now,” said James on Mar. 30 when asked about his chemistry with Wade. “Everyone is comfortable, and we know it’s our game and that’s how we’re playing. It was just about preparation. I know a lot about it and I know a lot about winning ball games. He’s (Wade) come out on top and I’m trying to get there. We just follow each other’s lead every night.” 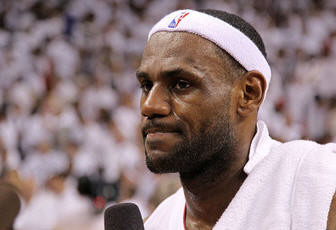 One factor about this Heat team was their inability to establish their roles throughout the regular season. The Three (not the Big Three because they have not won anything together yet) had to perform better than just feed the one who had the hot hand.

In close contests, James found himself forcing bad shots and struggled to close out games from the perimeter, when Wade was better suited for that role but stood away. Bosh did not know whether he wanted to go hard in the paint or shoot from the perimeter.

Although The Three experienced critical situations due to their leadership roles from their previous squads, they now have shown (when it counts), in the playoffs, how comfortable they are in their roles with each other, as their team chemistry is becoming much smoother.

“Everything’s a lot smoother on both ends,” said Bosh. “We keep the ball moving, and late in the game, we played our system and moved the ball around well. There were open shots we missed and made, and we kept playing.

“We knew it was going to take time for us to come together,” he continued. “It has happened quicker than I had imagined, but we are continuing to work and I think we still have a long way to go. We are going in the right direction.”

The hate factor towards the Heat could also play a role to help make them a bad championship team. Unlike the other high-profile squads from the NBA’s past, like the 90s Bulls and the 80s Los Angeles Lakers, who were treated like a rock band and beloved, even on opponent’s floors, the Heat experienced more of a backlash as they were celebrated more, nationally, for their shortcomings than their victories.

Though unfortunate, the crowd’s negative reactions are okay and understandable by the Heat.

“But at the end of the day, we’re fine, we expect it. Now, if we got booed at home, that’s a different story,” he continued with a grin. “But we go on the road, those fans are supporting their team and we’re coming in trying to take something from their team, so boos are okay with us.”

The Boston Celtics’ Big Three laid the formula as to how three big-time players could team up to win, based on the 2008 season, where they won the NBA title in the their first year together. Guard Ray Allen, guard/forward Paul Pierce and forward/center Kevin Garnett played different positions, and the demand for the ball by these players were from different aspects.

Allen plays off the ball through screens and picks to get open shots, Pierce demands more of the ball as a playmaker, while Garnett prefers the ball when he is positioned. Ultimately, passion, experience and sacrificing egos were the foundation of getting to the mountain top with Larry O’Brien trophy in hand. In addition, a commentary bench to follow.

Case in point for James and Wade, who both always had the ball throughout their basketball life. Many believed that they would have a conflict with sharing the ball, but they proved otherwise. 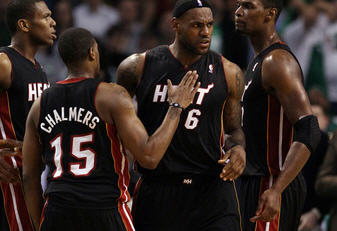 However, the Heat do not have a commentary bench, which is their main issue and bares the reason why this Heat team will be the worst champion, if they accomplish the feat. If The Three do not combine to score at least 80 points per game, the Heat’s chances to win are limited.

The Three have dominated nearly every major statistical category for the Heat during this season’s journey. They each shot over a 1,000 times from the field, hitting 65 percent of the team’s field goals, while no teammate attempted 400 tries.

They each attempted at least 450 free throws, shooting 78 percent, while no other Heat player achieved 75 attempts.

The Three were the team’s top rebounders, grabbing half of the team’s boards, and each played at least 1,200 minutes more than any other Heat member, which was at 44 percent.

The Three’s teammates had many three-point attempts as the countless amount of open shots they had, due the attention the three All-Star’s command. But when games were close, these percentage numbers increased.

These numbers define the meaning of carrying the team.

“We have good players. It’s about becoming a good team and believing in each other,” said Wade. “It took time to do that. We had the talent, but it took time to believe in the system and everyone to understand their roles…It took a little longer than everyone expected, even us, but it’s a beautiful thing when it works.”

After this season, The Three should receive the help that they are quietly crying out for, as seven of their 12 teammates will be unrestricted free agents, not including guard Mario Chalmers who will be a restricted free agent (he’s not crazy, he’s staying). Among the Heat’s unrestricted free agents, Mike Bibby, Erick Dampier, Eddie House, Juwan Howard, Zydrunas Ilgauskas, James Jones and Jamaal Magloire combined for $6,489,143, which the organization should use wisely to acquire solid pieces around The Three that will be effective.

The best part about the Heat thus far, regarding this season due to their performance, is that productive players will take less to play with The Three because their chances of winning a champion are great. With better acquisitions surrounding The Three, the Heat will have a better all-around squad in the years to come—far better than this championship caliber unit. 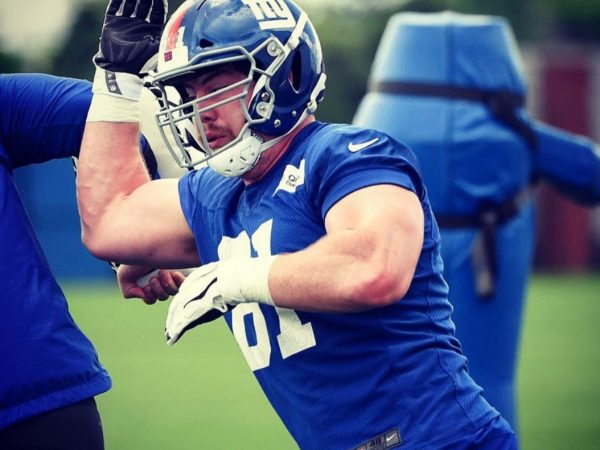 The Combine Report: Why Thurman, Ceresna’s Skill Set Will Translate From The CFL To The NFL