Home AFC North Steelers/Ravens Week: Why The Tension Is So Thick Between Their Fans
AFC NorthBaltimore RavensNFLPittsburgh Steelers

Steelers/Ravens Week: Why The Tension Is So Thick Between Their Fans 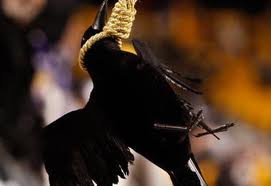 Baltimore and Pittsburgh are not glamour cities and they are not one of the country’s hottest tourist destinations. Both cities are loaded with hardworking, blue-collar workers and, for the most part, the natives are generally easygoing.

“When the Ravens and Steelers play, you can throw out all the numbers because they don’t matter,” said Ben Douglass of Havre De Grace, MD. “The only thing that you know is we’re going to get the best and more from both teams. Go Ravens.”

Other than the Dallas Cowboys, Steelers fans travel the best around the country, but Baltimore is impacted the most. Between the Maryland and Pennsylvania states, many natives commute to and fro for work. Many Pennsylvanians have changed their residence to the Baltimore metropolitan area for employment reasons, while Marylanders moved to Pennsylvania for housing because they could get more for their money. 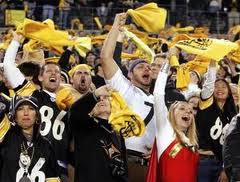 Apparently, the reason why Baltimore is overwhelmed by Steelers fans is because of the absence of the Baltimore Colts.  When the Colts were moved to Indianapolis is 1984, the urgency to follow a NFL team was dear to the hearts of many.

The Philadelphia Eagles were up I-95, which was not bad as some Baltimore fans ventured to support them.

However, with the thought of being a Washington Redskin fan, many Baltimore fans probably played with the idea of committing suicide first.

So the Steelers were the best team to follow, as they had no emotional ties.

Now that has changed.

“I have a strong dislike for the Steelers fans,” said Dave Shears, an entrepreneur from Baltimore. “I don’t even like the colors gold and black anymore. As far as the organization goes, they are what every other organization should want to be. You can’t argue with all the rings and the lunch pail mentality, it’s just they are in the Ravens way.” 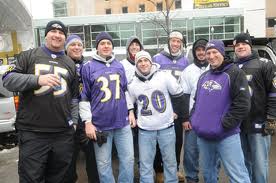 When the Ravens came to Baltimore in 1996, via the Cleveland Browns through owner Art Modell, Baltimoreans fell in love with their new team instantly.  In turn for Pennsylvanians who lived in the Baltimore metropolitan area that were Steelers fans grew as a family, as well as their businesses, and were rooted in Charm City.

Due to the residence of Pittsburgh supporters, the fans of the black and gold pack out M&T Bank Stadium more than any other team’s stadium.  Steelers fans can take over a stadium with their yellow “Terrible Towels” waving in the stands.

In Baltimore, not only are seats taken, Steelers fans even take over some of the tailgating areas as well.

Clearly, Ravens fans are proud, loud and they love their birds, especially if they are winning because they can be fickle at times. But the city of Baltimore is on one accord when the Steelers come to town. 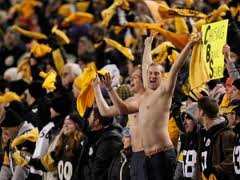 “I look at the Steelers like that annoying little sibling that needs to get clocked in the mouth to keep them in place,” said Les Kidwell, an administrator from a downtown Baltimore business. To avoid a Steeler takeover, Ravens fans must be vigorously waving their purple towels.

The Ravens open their season against the defending AFC champion Steelers Sunday in Baltimore and they will need their fans to be loud and proud.

While the Steelers looked explosive on sides of the ball during the preseason with no doubts of starting strong out the gate, the Ravens have some questions about their offense.  None more than their offensive line which will start at least two linemen who have not played a down during the offseason. 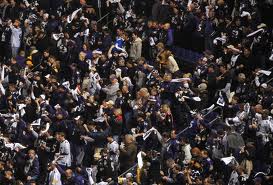 Ravens and Steelers fans take their cities match-ups more personal than the players. Similar to oil and water, the pride of the Baltimore natives and the traditional pride of Steelers fans will never mix.

The feint of heart who considers attending the game need to beware of the attitudes, language that will be used and fights that occur before, during and after the Steelers/Ravens contest. Steelers and Ravens fans, unfortunately, have mixed it up in the stands and in the bathrooms.

Moreover, the Ravens and Steelers have more respect for each other than hatred, but things sometimes get heated on the field too. 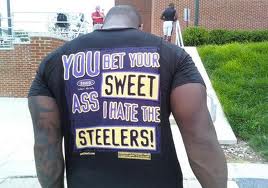 “I think that both teams are similarly committed to the same thing, of course, which is putting themselves in position to pursue the Lombardi (Trophy),” said Tomlin.  “You know, a prerequisite for that is division dominance.  So, we’re always going to have issues with one another in regards to that.”

The football world will enjoy probably the best rivalry in the NFL because of their brawl-like style of play against each other.

Both fortunately and unfortunately, the football world will not see where the original brawls started from for Ravens/Steelers week—in the stands.