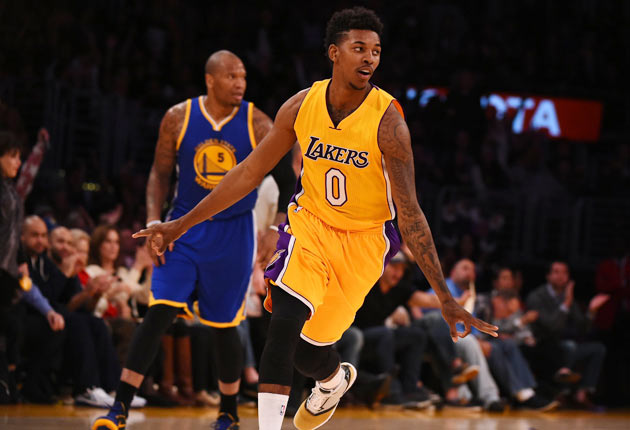 Home NBA Russell Betrayed The Brotherhood, Now He Has To Go
NBAOff the RadarUncategorized

Modern-day athletes have to deal with dynamics and pressures unfathomable twenty-years ago.

There are groupies looking for the next payday, shady characters scheming to take advantage of your fame and a 24-hour news cycle that follows your every move and makes you an easy mark for both.

The brotherhood within the locker room is all that you have in most cases. D’Angelo Russell, the Los Angeles Lakers rookie point guard, betrayed that brotherhood. And he must pay the price for it.

Unless you haven’t been to work, the convenience store or logged onto Social Media, you’ve probably heard about the D’Angelo Russell/Nick Young drama.

For the uninitiated: Russell recorded Young admitting to cheating on his rap star girlfriend, Iggy Azalea. The video was recorded in December, but it somehow found its way onto Snapchat and eventually Fameolous, a celebrity blog site.

It’s a wild story, but it has caused serious issues for Russell. None of his teammates will sit with him. Lou Williams, another Lakers point guard, even went so far as to get up when Russell attempted to sit by him in the locker room.

Russell is the Lakers starting point guard–the de facto leader on the court–but he’s been ostracized off of it.

It would be easy to write this off as another crazy, in-season story that’ll eventually blow over. But it likely won’t. If it was a matter of causing issues in Young and Azalea’s relationship, then it probably would be just another story. But Russell’s betrayal digs way deeper than that.

His betrayal cuts into the core of what team sports are supposed to be about. It’s about comradery, loyalty and trust. He betrayed that trust when he recorded Young in a private moment. It doesn’t matter that he didn’t intend to release it for the world to see. He did it. That’s all his teammates care about.

Russell’s not a scrub. He was the 2nd pick in the 2015 draft and is averaging 13.2 points per game. He hasn’t dominated in his first year, but he’s shown flashes of brilliance. From February 24th to March 10th, he had seven 20-point games.

The talent is there. But is he talented enough to override his mistake? I don’t think so.

What should be the Lakers next move?

While I know it’ll be tough for Lakers management to trade a potential core piece, it may be their best option.

There will be a market for him. Forget the silliness; Russell is talented combo guard with All-Star talent. I don’t think he’s a build-a-franchise-around-him talent.

Otherwise, I’d advise the Lakers to keep him.

Who should pursue Russell? A young, emerging team.

He has really emerged as a true franchise talent since being switched to point guard in February. With Antetokounmpo leading the way, their future is bright.

He needs pieces around him, though. The Bucks have a few: Greg Monroe, Kris Middleton, Jabari Parker and Michael Carter-Williams. Those players have weaknesses. Monroe and Parker are unreliable defensively. Middleton is versatile but a role player. Carter-Williams has star potential but is inefficient.

The Bucks could either add Russell to those core players or trade one of them for him.

Solid pieces but not they’re not stars, although I think Smart has a chance to be one.

Russell would fit in nice with this squad and give them a core piece. They have multiple first round draft picks to give the Lakers, too.

Philadelphia 76ers—The 76ers could write a book on how to bungle a rebuilding project. But they do have a few assets themselves.

Jahlil Okafor is having a nice rookie year. Nerlens Noel isn’t the best offensive player but could become a premiere rim protector. And Joel Embiid, if he’s ever healthy, could be legitimate NBA big.

Russell could be sent to the 76ers for one of those big men or one of their multiple first-round draft choices.

All three teams would be good situations for Russell. He can either be part of a solid core or disappear for a few years on a rebuilding team.

Any team trading for Russell has to accept one reality: He cannot be your point guard. Point guards are the leaders and have to be trusted. Russell might never be trusted again.

I actually believe Russell when he says that it was a prank gone wrong. I really do. It doesn’t matter, though.

He’ll never recover from “breaking code” and opening himself to others finding out that he did.

D’Angelo Russell’s career will go on. But it shouldn’t be as Laker.