Redskins vs. Rams: Skins Rode Their All 'Torain' Vehicle Through St. Louis, 17-10 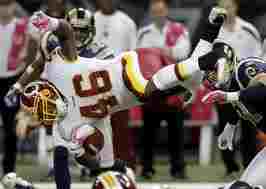 On a short week of preparation, the Washington Redskins hit the road in consecutive weeks to take on the St. Louis Rams. The Redskins (3-1) may have been tired after their Monday night loss to the Dallas Cowboys, 18-16.

Fortunately for Washington, Redskins running back Ryan Torain wasn’t affected by their road trip to Cowboys Stadium.  The healed and rested Torain pounded his way for his fourth career 100-yard game as he carried the burgundy and gold to their third win in four games, with some late drama, 17-10.

After a dominating afternoon by the Redskins, who sacked Rams quarterback Sam Bradford seven times and hit him 14 times, a signature outing from Washington would not be complete without some drama.

With 12:45 remaining in the game when Washington had a 17-0 lead, Redskins quarterback Rex Grossman attempted a pass on third-and-21 when the ball was tipped by wide receiver Santana Moss, into the hand of Rams cornerback Justin King.

Thanks to an unnecessary roughness penalty committed by Redskins cornerback DeAngelo Hall, the Rams finished that drive with a field goal…making the contest 17-3.

After a Redskins’ three-and-out, the Rams went down the field and scored a touchdown on a short pass from Bradford to running back Steven Jackson for a 15 yard hook up.  Not before some assistance from Redskins linebacker Rob Jackson, who was called for a roughing the passer penalty to keep that scoring drive alive, making it a 17-10 contest with 5:50 remaining.

On the Redskins’ next possession, Grossman threw a bad pass off play-action and off an adjustment, Rams linebacker James Laurinaitis turned around to pick off the floating ball.  Laurinaitis returned the play for 15 yards to the Redskins’ 19 with 5:45 left.

Nevertheless, the Redskins’ defense continued to be aggressive and kept the pressure on Bradford, who finished with 164 passing yards off 20 for 43 attempts and a touchdown.

The Redskins forced the Rams to punt and a turnover on downs, preventing a monumental collapses and a losing streak.

Grossman looked flat all afternoon long as he never settled underneath his throws, threw balls late and was uncomfortable throughout the contest.

Grossman completed 15 passes off 29 attempts for 143 yards, a touchdown and two interceptions. 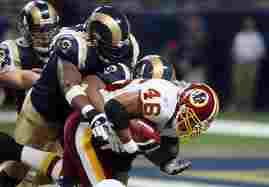 Clearly, the afternoon was all about Torain, as he finished with 135 rushing yards off 19 carries and a touchdown in his first action of the season.

The Redskins may be embarking on something their franchise has never witnessed: a three-headed monster in the backfield. 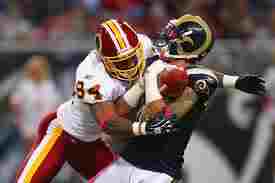