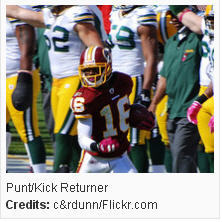 In a statement from the Police, a man got into a verbal altercation with two men (Banks being one of them) when suddenly he pulled out a knife and stabbed them shortly after 3:00 a.m. outside the club.  The Redskins confirmed that Banks was injured in the attack, although the Police did not identify the victims.

According to a source, Banks, the undrafted rookie free agent from Kansas State, was trying to help a childhood friend, who was initially attacked, Banks’ agent, James Gould, confirmed the incident, and the source’s information.

“Early this morning, Brandon Banks was injured outside of a nightclub in Washington D.C. while coming to the aid of a life-long friend, who was attacked by an assailant who was wielding a knife,” said Gould in a statement. “His friend was critically wounded and was taken to a local hospital where surgery was performed.

“Brandon was injured by the assailant with a surface knife wound on his side which will require stitches,” he continued. “He is recovering in a local hospital and is expected to be released within 24 hours.”

During the offseason and through training camp, Banks impressed the Redskins’ organization with his speed, where he was clocked at 4.2 in a 40-yard dash.  The second-team All-American returned a 77-yard punt for a touchdown in the Redskins’ first preseason game against the Buffalo Bills, but Banks was released by the squad on Sept. 26, to only be re-signed to the team’s practice squad on Sept. 29.  The Redskins recognized that Banks could help a special teams unit that sorely needed a good return man.

Banks, who is the second lightest player in the NFL standing at 5-7, 155 lbs., became a popular Redskin as he returned kicks for touchdowns and blocked a field goal, including setting a franchise record for 271 return yards in Week 8 against the Detroit Lions.

Banks’ popularity gave him the opportunity to co-host his own show through the “Sports Journey Network” on Tuesdays and Thursdays during the season in Arlington, VA.

According to the Authorities, the suspect name is Jason Shorter, 24, of Lanham, MD and he was arrested and charged with assault with intent to kill. The officials did not know whether Shorter had an attorney.

Banks may be short in stature, but big in heart as he displayed it on the field and he is not a part of any wrongdoing, in any element.