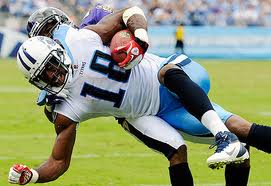 If the Tennessee Titans colors were black and gold, the Baltimore Ravens would have played with the same intensity and urgency from a week ago when they performed brilliantly against their rival Pittsburgh Steelers.  Instead, Titans veteran quarterback Matt Hasselbeck and wide receiver Kenny Britt caught the Ravens sleeping, 26-13.

“We didn’t play as well,” said Ravens head coach John Harbaugh. “I don’t have any theory right now. Everybody is going to have a theory and none of them are going to be right. There were a lot of things that were a part of it. We didn’t make plays when we needed to make.

“We didn’t get off the field on third downs. I haven’t seen the numbers yet but third downs were not good on either side, that’s the bottom line.”

New Titans head coach Mike Munchak get his first NFL coaching win at the expense of a Ravens team that was riding an emotional high from last week’s win in Baltimore.  Munchak received a Gatorade dunk with 26 seconds left in the game.

With all the credit going to the Titans (1-1), the Ravens were completely out of touch in this contest.  Baltimore’s running game, off the back of running back Ray Rice, who finished with 43 yards on 13 carries, never got on track do the offensive line ineffectiveness. 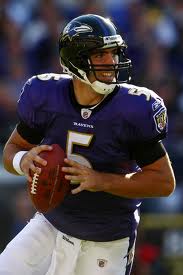 Quarterback Joe Flacco struggled to complete passes, due to the lack of pass protection, and his wide receivers were not getting open.  And when the Ravens receivers did get some space, they could not bring the ball in.

Flacco registered 197 passing yards off 15 completions on 32 attempts, a touchdown and two interceptions.

“We felt like if we could keep these guys on the field and do that over an extended period of time, we would be able to score points on these guys,” said Flacco.  “Obviously we didn’t do too many things that helped us out there, we didn’t convert. We didn’t really keep ourselves on the field for a very long time.

“We were never really able to get to them, wear them out a little bit and break them,” he continued.  “You have got to credit those guys for preventing that.” 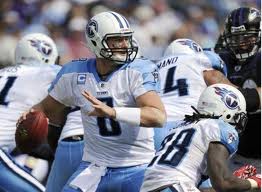 Hasselbeck started to gel with his teammates as he sliced and diced the Ravens (1-1) defense, mainly the secondary, for a solid first victory as a Titan as he compiled 358 yards off 30 completions on 42 attempts, a touchdown and an interception.

Clearly, the Ravens’ only game planned for Titans running back Chris Johnson and succeeded, as the play-making back was shut down, with 53 rushing yards on 24 carries.

“Any time you have a home run hitter like that, that is the focus,” said Ravens linebacker Ray Lewis. “The focus was Chris Johnson and we got after him. We really got after him and that is a credit to everything we focused on. Each team you are going to focus on some individuals here or there. They went away from that.

“They saw that we were really getting after him and they started throwing the ball,” said Lewis. “Hasselbeck is a veteran quarterback. He stood out there and got the ball out quickly.”

Apparently, the Ravens defense did not get the memo on Britt being a legitimate star receiver in the NFL, as he man-handled each defensive back that the Ravens threw at him.  The 6-3, 215-lb. pass catcher finished with 135 yards on nine catches, including a four-yard touchdown catch in the second quarter.  Britt was most effective in critical situations, in which the Titans needed a play, and he delivered.

Outside Ravens linebacker Terrell Suggs, who finished with two tackles and an interception with constant pressure from one side, the defense was not effective.

The Ravens and Titans were tied 10-10 at the half.  The Titans deferred to the second half and the largest victory for Tennessee was its ability to execute long drives throughout the second half.

The Titans had the ball five times for the second half and sustained drives of eight, twelve, four (twice) and fourteen plays.  The Ravens defense was successful in one outing, forcing a three-and-out entering into the fourth quarter.  However, the other four-play drive of the Titans ended with a 39-yard field goal, due to Flacco’s second pick of the day as he intended for a pass to tight end Ed Dickson.

“I got a little greedy trying to make a play and let Ed (Dickson) make a play,” said Flacco. “It just so happened that (Cortland) Finnegan got his hands on the ball and tipped it up and the guy (Jason McCourty ) was sitting back there for it. Probably getting a little too greedy and let a guy make a play and it wasn’t a very good one on my part.”

The Ravens could not get the ball out of the Titans’ possession.

“You have to credit those guys. They came out there and put points on the board and once again we fell back into our trap on offense in not really getting in any rhythm,” said Flacco. “I think we had a false start that kicked us back to first and fifteen and we weren’t able to overcome it. We had a couple third and longs and we just couldn’t convert them.”

The Ravens had an opportunity to get back into the contest when Tennessee was up 23-10.

Flacco connected on five consecutive passes to help set up great field position at the Titans’ 6 yard-line.  Consequently, the Ravens came up with nothing, settled for a field goal with 5:02 remaining in the game.  If the Ravens forced a three-and-out or a turnover, they would have had more time to attempt a comeback.

Nonetheless, after a 14-play drive by the Titans, Baltimore did not get the ball back until 26 seconds was left on the clock.

The Ravens led once when they were up 7-3 mid-way through the second quarter with 4:49 left.