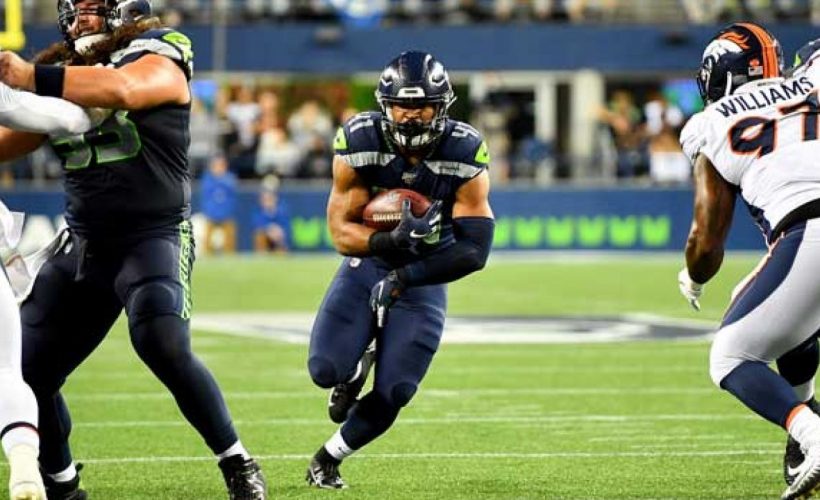 As a viewer of the Seattle Seahawks/Denver Broncos matchup in Week One of the NFL preseason, it would appear the Seahawks rookie running back Xavier Turner was drafted. It would also be assumed that Turner knew every play in the playbook from front to back.

Neither was the case.

Turner is an undrafted free agent from Division II’s Tarleton State University, located in Stephenville, Texas. Turner spent most of his offseason with the Arizona Cardinals. After being released by the Cardinals last week, and the necessity of establishing a backfield in Seattle, the Seahawks worked out Turner, signed the physical back and practically threw the playbook at him to learn in hours time.

“I knew a good four,” replied Turner when asked how many plays did he know prior to the game. “They just told me to be ready. I got my head in the playbook, and I was ready and there to support these guys.”

Turner took those four plays and blitzed the Broncos’ defensive front for 42 yards off a game-high 13 carries. Turner showcased his power and speed in front of the NFL world, and his new teammates. Turner also helped keep his quarterback clean as he picked up blitzing defenders and showed off his hands with a reception for eight yards.

Appearing on the O.U.T. List entering this year’s draft, Turner’s skill set fits ideally with how the Seahawks want to run their offense with a power ground game to support their franchise field general Russell Wilson.

On the other side of the ball from the O.U.T. List was rookie running back Devontae Jackson who debuted in the Hall of Fame game. He was pretty good and his performance carried over to this week’s matchup.

Jackson still averaged six-yards per carry as he amassed 18 yards off three catches, however, he crossed the goal line for his first NFL touchdown.

In the fourth quarter with 3;19 remaining in the contest, Broncos rookie quarterback Drew Lock received the snap from shotgun at the Seahawks’ four-yard on second-and-goal. Jackson sprinted out the backfield in the flat and Lock tossed the ball to him for a quick touchdown.

Not to be out done, rookie running back Craig Reynolds debuted nicely for the Washington Redskins.

Reynolds led the Redskins ground game with 21 yards off nine carries and had a reception for five yards against the Cleveland Browns.

STICKING TO HIS GUNS

Los Angeles Chargers are in the hunt for a successor to future Hall of Famer Philip Rivers. Can rookie quarterback Easton Stick be the one?

After his NFL debut, Stick may have a chance.

Stick got on the field midway through the third quarter. The O.U.T. List talent from North Dakota State wanted to show he can throw well from the pocket. After a couple forced throws, including an interception, Stick settled down and produced the best drive of the night as he went nearly the length of the field.

In the fourth quarter with 13:42 remaining, Stick put together a 10 play drive that spanned 6:26 minutes. He faced two critical third down situations. Stick connected with wide receiver Smallwood for 27 yards on third-and-16.

On a night when quarterbacks wanted to show their wheels, Stick displayed the better feet as he converted a third-and-14 situation from the Cardinals’ 31-yard line into a 31-yard touchdown scrambled. Stick is athletic with the combination of throwing and running.

On that drive, Stick stuck with his gifted abilities and trusted them. Now, all Stick has to do is – stick with it, his game.