Down 38-17 and needed to make a play on defense, Indianapolis Colts’ Pro Bowl defensive end Robert Mathis was in over pursuit and pushed away from getting to Kansas City Chiefs’ quarterback Alex Smith for a sack. But the NFL’s sacks leader continued to hunt for Smith and forced a sack-fumble on Smith and linebacker Kelvin Sheppard recovered the loose ball with 9:00 remaining in the third quarter.

After the turnover, Colts’ quarterback Andrew Luck led the charge down the field, and on first-and-goal from the Chiefs’ 3-yard line, he hooked up with running back Donald Brown on a bubble-screen, four receivers on the right side in a circle formation, and he took it in for the touchdown to get the ball rolling with 7:32 left in the third quarter. 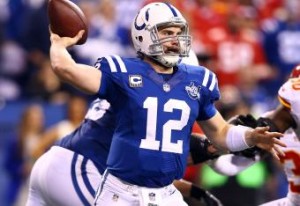 That was the sparkle the Colts needed and second-year quarterback from Stanford never looked back with Brown and wide receiver T.Y. Hilton by his side for a dramatic come-from-behind victory, after being down by as many as 28-points, 45-44.

With 4:21 left in regulation, Luck connected with Hilton, who finished with 13 catches for 224 yards and two touchdowns, for a 64-yard touchdown pass down the middle of the field for the eventual go-ahead game winner.

The Chiefs came out sharp after having their starters sit for the team’s final regular season game against the San Diego Chargers last Sunday as they posted 31-points in the first half.

However, as the Colts started to gain momentum, the Chiefs could not adjust due to fatigue and injuries as they lost running backs Jamaal Charles and Knile Davis, wide receiver Donnie Avery, cornerback Brandon Flowers and linebacker Justin Houston for the game.

“The guys played well. They did a nice job, Alex (Smith) did a nice job, as did the offensive line,” Chiefs’ head coach Andy Reid. “Everybody contributed and played well. We didn’t do well enough though. We’ve got to take care of that thing at the end there and score points.”

The Colts had the fewest turnovers in the league with 14, but they had four in Saturday’s contest. 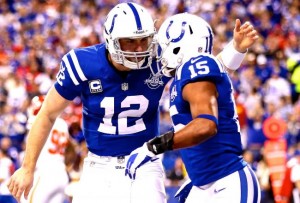 Luck, who completed 29 out of 45 attempts for 433 yards, four touchdowns and three interceptions, never lost focus and kept motivating his team towards a classic comeback, the second largest comeback in the NFL postseason history.

Game Notes By Courtesy of the Kansas City Chiefs

-The team also set a new franchise record for most touchdowns in a postseason game, finding the end zone five times, breaking the old club mark of four touchdowns, set on three occasions.

-Kansas City scored on the club’s first six offensive drives of the game, marking the first time that a team has done so in the postseason since Indianapolis scored on its first seven possessions in an AFC Wild Card Game vs. Denver on Jan. 4, 2004.

–The Chiefs set a new franchise record for most net yards, gaining 513 yards in the contest, passing the old club mark of 451, set on Dec. 25, 1971. It marks the first time in franchise history that the club has registered 500 or more yards of total offense in a postseason game. 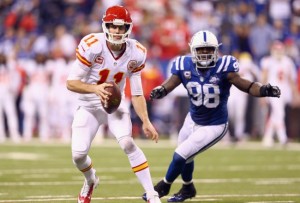 –Chiefs QB Alex Smith completed 30 of 46 passes for 378 yards with four touchdowns and no interceptions, good for a 119.7 passer rating. His four touchdown passes sets a new franchise record for most passing touchdowns in a postseason game, passing the old mark of three set by QB Joe Montana at Houston on Jan. 16, 1994.

-Smith’s 378 passing yards in today’s game mark the highest total in a postseason game in franchise history. He is only the second Chiefs quarterback to ever throw for more than 300 yards in a playoff contest in club history, passing QB Joe Montana’s mark of 314 passing yards at Miami on Dec. 31, 1994.

-His 30 completions rank as the most completions in a postseason game in franchise history, while his 46 pass attempts rank first in club annals.

–After setting the franchise single-season record for rushing yards by a quarterback this season, QB Alex Smith picked up 57 yards on eight carries (7.1 avg.) in today’s game to finish as the club’s second-leading rusher. His 57 rushing yards are a career-high mark for a postseason game.

–Including Saturday’s game, QB Alex Smith has completed 66 of 114 passes for 873 yards with nine touchdowns and no interceptions in three career postseason starts, good for a 108.6 passer rating. He also has 15 carries for 127 yards (8.5 avg.) with a rushing touchdown in those three games. 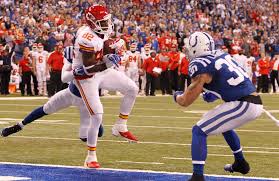 –Bowe caught eight passes for 150 yards (18.8 avg.) in today’s game, setting a new franchise record for receiving yards in a postseason contest. It is the first time a Chiefs player had a 100-yard receiving day since Andre Rison had eight catches for 110 yards vs. Pittsburgh on Jan. 4, 1998. It is the seventh time a Chiefs player recorded 100 or more receiving yards in a postseason game.

–LB Tamba Hali forced a fumble of Colts RB Trent Richardson in the contest. It is Hali’s second-career forced fumble in postseason action. He forced a QB Joe Flacco fumble on a sack-and-strip and eventually recovered the ball himself in the club’s last postseason contest vs. Baltimore on Jan. 9, 2011. Hali added one solo tackle and a QB pressure. 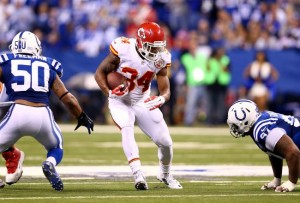 –In the place of an injured RB Jamaal Charles, rookie RB Knile Davis finished as the team’s leading rusher, racking up 67 yards on 18 carries (3.7 avg.) with one rushing touchdown. He added seven receptions for 33 yards with a receiving touchdown. He ties the franchise record for most touchdowns scored in a postseason game.

–CB Brandon Flowers grabbed an interception off QB Andrew Luck in the game and returned it 17 yards. It is his first playoff interception. He added three tackles (two solo) and two passes defensed in the game.