There was an old-fashion football game in Wisconsin with below 0 wind chills. With several big plays down the field, the San Francisco 49ers and Green Bay Packers lined up placing a hat on a hat and they man-up in the trenches as the running games of both squads took center stage.

However, it was the playmaking ability of 49ers’ quarterback Colin Kaepernick that decided the matchup as he led a 5:03 drive to set up kicker Phil Dawson to nail a 33-yard game-winning field goal as time expired for the 23-20 win.

Throughout the game, the Packers would take advantage of the 49ers by going underneath. The Niners consistently attacked quarterback Aaron Rodgers, who finished with 177 passing yards off 17 for 26 attempts and a touchdown, with a four-man rush as they focused on the deep pass. When the 49ers got to Rodgers, he would slip away to extend plays to hit his pass catchers down the field on long drives.

None bigger than in the fourth quarter on fourth-and-2 at the 49ers’ 30-yard line, with 13:28 remaining, when Rodgers did his Eli Manning impression of scrambling away from a gang of Niners to hit wide receiver Randall Cobb on a 26-yard pass to set up full back John Kuhn’s 1-yard touchdown run to take a 17-13 lead. 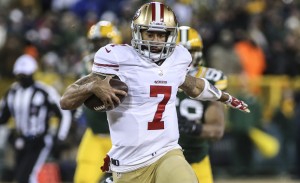 For the Niners, quarterback Colin Kaepernick was deadly on third downs as he used his legs to pick up chunks of yardage. Due to the threat of Kaepernick on the ground, the Packers would play tight and the third-year quarterback from Nevada would connect with his pass catchers deep on short drives.

After matching wits against the high pressuring Niners’ D, the Packers tied the game at 20-20 off a 24-yard field goal from kicker Mason Crosby with 5:09 left in the contest.

On the eventual final drive of the game, Kaepernick struck again as he converted a third-and-8 from the Packers’ 38 by gaining 11-yards with 1:13 left on the clock.

From there, running back Frank Gore, who finished with 66 yards on 20 carries, pound the rock to eat the game clock down to :3 seconds and Dawson ended the game with his 33-yard kick. 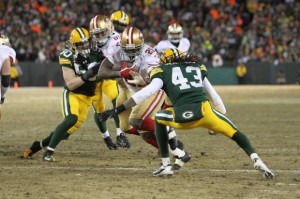 Kaepernick completed 16 out of 31 attempts for 227 yards, a touchdown and an interception, topped with a game-high of 98 rushing yards on seven carries.

Game Notes By Courtesy of the San Francisco 49ers