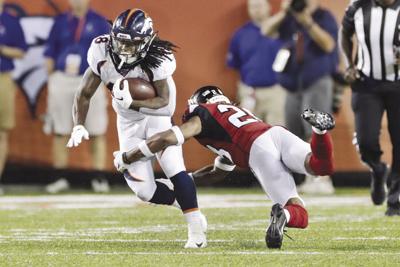 Unknowns Talents Made Some Impression

While the starters sat out, many of the roster fighters for the Denver Broncos and Atlanta Falcons went to work in the 2019 NFL Hall of Game in Canton, Ohio. And the NFL Regional Combine pioneers did not disappoint despite limited playing time.

Falcons veteran defensive back Kemal Ishmael was his normal self flying to ball carriers and making stops. He finished with three tackles.

New to the Falcons is safety Jason Thompson, who is athletic, physical and quick. The journeyman defensive back ventured through the RC process in 2017. In the contest, Thompson played 34 percent of the special team snaps and performed with the defensive unit on 21 percent of the defensive snaps. He amassed two tackles.

However, Falcons defensive tackle Justin Zimmer was extremely active and found himself finishing on nearly every stop the Falcons’ defensive fronts were involved in. The high motor Division-II product from Ferris State tallied five tackles.

Falcons kicker Giorgio Tavecchio went one-for-two on field goal attempts, nailing his successful try from 27-yards out. And Falcons tight end Alex Gray was short on catching a touchdown pass from quarterback Kurt Benkert as the ball was just a bit behind him in the endzone with 4:37 left before half time.

While the NFL Regional Combine pioneers dominated the defensive side of the ball for the Falcons, the offensive side for the Broncos hosts a couple of RC players.

Wide receiver Steven Dunbar Jr. made his debut for the Broncos and he faced bump and run coverage each time he was lined up. Despite fumbling, Dunbar made the best of his three catches for 14 yards.

Among the talents, one O.U.T-list (Overlooked Unknown Talents-list) Broncos running back Devontae Jackson was decent in his NFL debut.

The standout from the West Georgia was the Broncos’ second leading rusher of the evening as he ran hard between the tackles for 26 yards on 12 carries. Clearly, Jackson was adjusting to the speed of the NFL early in the contest, but powered for strong yards late in the game.

Jackson also had a return for 23 yards. With four preseason games remaining, Jackson still has time to impress.

LockerTalk Podcast: RC Talents On The Verge Of Getting To SB LIV - NFC Previous post

The Combine Report: Preseason Week One - Mullens, Walter Led The Way For The RC Platform Next post