Up by seven with 3:53 remaining in regulation, as the San Diego Chargers had no timeouts left, Peyton Manning had the ball and the Denver Broncos’ season in his hands once again, like he had last season when he faced the Baltimore Ravens with the similar situation. This time, Manning delivered in the clutch as converted on a third-and-17 and a third-and-6 to ultimately run over the clock for a 24-17 win over the Chargers.

“We have worked situations all week. I feel like that game last year forced us to address those types of situations all season long.” said Manning after the game. ‘We’ve worked it in training camp, we’ve worked it in the season and Coach Fox has called for it in situations. He doesn’t exactly tell you what the situation is going to be—offense vs. defense. So you’re having to kind of play that game in practice. It was nice that all that hard work paid off for us in that situation.

“The third-and-15, certainly it was a no-brainer there what you had to do. It was really disappointing that we were even in that position,” he continued. “We had been so good on first and second down the entire game, and we had a penalty, had run for a negative loss, had an incompletion. Great play call by (Offensive Coordinator) Adam (Gase). Really was a big-time play call. Got them in the right look and a good catch by (TE) Julius (Thomas). 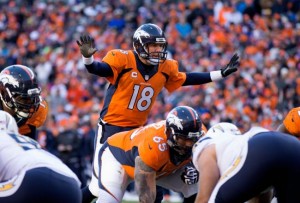 “The second one was another good route by Julius. I thought you saw that all game, Adam putting different guys in different positions. Certainly two huge third-down conversions, which were the difference in the ball game.”

The Chargers looked to own the ground game and time of possession against the AFC West champion Broncos. Instead, the Broncos stuff the ball up the middle against the Bolts for 133 yards and had the ball for over 35 minutes. Manning will welcome his career rival Tom Brady and the New England Patriots in Denver for the right to go to the Super Bowl.

“Tom Brady has just been an outstanding quarterback for such a long time, but the game next week is the Broncos versus the Patriots,” said Manning. “I know there will be some individual matchups that will get headlines, but it will be a battle between two good teams. Teams that have been through a lot, that have overcome a lot to get to this point, and that’s where my focus will be—trying to help the Broncos get a win against the Patriots.”

The Bolts stuck to their game plan of running the ball in the first half, and for majority of the third quarter. After being down 0-17 entering the fourth quarter, the Chargers opened things up in the final 15 minutes.

Quarterback Philip Rivers hooked up with rookie wide receiver Keenan Allen for a 16-yard touchdown pass to get within 10 early in the fourth quarter.

The Broncos answered with a 3-yard touchdown run by running back Knowshon Moreno. 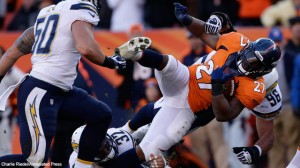 The Chargers started to throw blows with the Broncos as they scored 10 unanswered points to get within seven.

From there, Manning and the Broncos ended any chance of a late comeback to keep their Super Bowl chances alive. The Broncos’ running game came through for Manning, which helped to relieve some pressure off of the four-time NFL MVP.

“I think that’s the strategy every week. I think every offense in the league looks to have balance,” said Broncos’ head coach John Fox. “You kind of adjust to what the defense does, kind of what they give you or take away. All in all, tonight I think we played well up front on both sides of the ball. We stopped the run much better than we did in some earlier meetings.

“I thought we ran the ball with more efficiency, especially our first-down percentage-we didn’t have a lot of negative runs. That’s a tribute to the payers executing.”

Game Notes by Courtesy of the Denver Broncos

-The Denver Broncos (13-4) defeated the San Diego Chargers (10-8) by a score of 24-17 to advance to their ninth AFC Championship in franchise history. Eight of the club’s nine AFC title game appearances have come under Owner & CEO Pat Bowlen (1984-pres.), representing the fourth-most in the NFL in the last 30 years.

-Broncos Head Coach John Fox improved to 7-5 (.583) for his career in the postseason to represent the fifth-most playoff wins among active head coaches in the NFL.

-Broncos QB Peyton Manning, who completed 25of-36 passes (69.4%) for 230 yards with two touchdowns and one interception (93.5 rtg.) against San Diego, moved past QBs Joe Montana and Brett Favre into third place on the all-time postseason passing yardage list and moved past QB Dan Marino into fourth place on the league’s all-time playoff touchdown pass list. 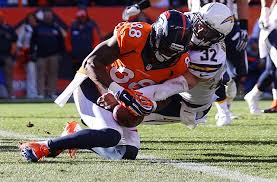 -Denver did not punt for the first time in their playoff history and just the eighth time in NFL postseason history (three of those eight postseason games without a punt have been with QB Peyton Manning under center)… The Broncos scored a touchdown on their opening drive for the fourth time in their last five games dating to the regular season… DE Jeremy Mincey recorded his first sack as a Bronco in the first half.

-Denver’s 69% third-down percentage (9-of-13) is the best mark any team has recorded in the postseason this year… Denver’s first score allowed (SD touchdown with 12:59 remaining) represented the longest the Broncos shut out an opponent in the postseason.