The New York Jets continues to amaze fans and opponents with their special teams, defense and solid running game off the legs and strength of Chris Ivory as they cooled off the hot New Orleans Saints in upset fashion, while Jets’ head coach Rex Ryan secured family bragging rights, 26-20.

The Saints (6-2) picked up from where they left off of from last week when they blitzed the Buffalo Bills for five touchdowns as they posted a 14-6 lead early against the Jets (5-4) in the second quarter.

Ryan settled his team and stuck to his game plan with Ivory as they slowed down the Saints to power their way back into the game to take the lead – eventually for good.

“I beat my brother again (laughter). Just kidding,” said Ryan. “Looking at this game, we knew it was going to be tough. There’s no doubt it was going to be a tough game. We didn’t know how we’d win it and all that, but all I know is that I have a team that believes and will fight to the end and find a way. That’s really what we did. It was a great team effort. The pride of this Jet team….that’s why we won.

“We had to overcome some tough injuries to (Jeremy) Kerley, Antonio Allen, and Garrett McIntyre,” he continued. “Those are tough injuries, but we hung in there and found a way. We slipped in a coverage and it goes for 60 yards, and (Drew) Brees doesn’t need a whole lot of help. That one kind of hurt us and got us on our heels, but we hung in there. We overcame some big penalties against us, which we have to get cleaned up, but I was proud of it.”

Rex Ryan and his twin Rob Ryan, Saints’ defensive coordinator, has met against each other five times as coaches and Rex is 5-0 against him, but he does not glory in the family contest.

“At the end of the day, now you realize that your brother just took a loss,” said Ryan. “That’s the tough thing. I pull for them every single week except one. I’ve mentioned it before – I always look at their score. I can’t tell you another game…there’s not one game I can tell you how it went today, but if the Saints were playing, I’d have known.”

The key ingredient for a Ryan-style of football is a strong, effective running game, and in Ivory, he has that as the ground game to help support his rookie quarterback Geno Smith and his defense to stay fresh.

“Chris goes for 139 yards and averages 7.7 a carry against his old team…it’s tremendous,” said Ryan. “That’s what we’ve been seeing. We know if he’s healthy, this young man has the ability to be a punch-you-in-the-face type of back. He has speed, he has vision, and he runs with power. To compliment him with Bilal Powell, those two guys really do a great job for us.”

The Saints signed Ivory as an undrafted free agent in 2010 and he played in New Orleans for three seasons (2010-2012). Due to injuries and a loaded backfield, the Saints did not re-sign the bruising back from Tiffin College after the 2012 season. So, the Jets scooped him up.

There was no venom in Ivory against the Saints as he needed no extra motivation, just the opportunity.

“No, it didn’t. You treat every game the same,” said Ivory when asked if the win meant more to him since it was against the Saints. “It always feels good to come out with a win. I think I did well with the opportunities I had today.

“I went with my role today and we won,” he continued. “You guys want me to say that (this win meant more), but that’s just not how it feels. I really look at it just like another game.”

The Jets’ defense kept the Saints’ offense at bay and forced them to resort to trickery in fourth quarter.

Midway through the fourth quarter with 7:56 remaining, while down 17-26, quarterback Drew Brees went to the most unlikely pass catcher on third-and-inches in full back Ted Collins, who had not caught a pass all season, and he dropped ball which would have been an easy first down and more for the Saints deep in Jets’ territory.

On the following play, the Saints went for an end-the-round play and the Jets never fell for the attempt as defensive end Quinton Coples stuffed tight end Josh Hill for a 10-yard loss.

“That’s something we talked about for the last three days, wanting to call that and run it in a critical situation and felt like that was just the right time to do it,” said Brees. “It’s fourth and (short), so everybody (is) kind of selling out for the interior run, and then here we run this reverse for a big play. (It is) unfortunate that it didn’t work. It’s kind of one of those play that’s all or nothing.”

That failed reverse play was significant as the Saints could not get into another rhythm after closing the gap to six.

“I wasn’t so much worried about him running up the middle,” said Coples. “I was worried about the pitch pass or him pulling it in and throwing the ball down field on a play action. My job is to make sure the pitch pass doesn’t get outside of me and to make sure that I get to the quarterback. I saw him go for the play action reverse and then I just had to make the tackle.

“I was thinking that he was going to put it away and throw the ball, but when he handed it off my eyes just got big because I knew I was going to run right through him.”

Game Notes by Courtesy of The New York Jets

-Rookie S Rontez Miles, who was activated from the Jets practice squad (11/1/13), made his NFL debut when he played on the kickoff coverage unit.

-WR Greg Salas made his Jets debut and registered two catches for a team-high 57 yards. He recorded his first reception of the season with a 13-yard catch and run late in the first half and added a career-long 44-yard reception on the opening drive of the second half that set up a field to increase the Jets advantage to 23-14.

-Ryan has now run his record to 5-0 against his twin brother, Saints Defensive Coordinator Rob Ryan, as NFL coaches. With the Jets, Rex has registered wins against Rob three times.

-This season, the Jets who entered the game leading the league in rushing yards allowed per game and opponent rushing average have allowed an average of 73.9 yards per game and 3.15 yards per carry. 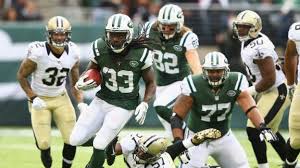 -Ivory led the Jets offense with 18 rushes for 139 yards and his first touchdown as a Jet, including three runs of 25 yards or longer. His 27-yard run following LB Demario Davis’ interception led to a Folk field goal. He added both a personal and team season-long 52-yard run early in the second quarter to help lead the Jets offense to their second field goal. He later scored his first Jets touchdown on a three-yard run to move the score to 14-13 late in the first half.

-Ivory went over the 100-yard mark for the second time in three games with a 30-yard run to end the third quarter. For his career, Ivory’s teams are 5-0 when he gains 100+ yards rushing.

-Smith scored his third rushing touchdown of the season on a three-yard run with 0:37 left in the first half to put the Jets up 20-14. The rookie rushed six times for 18 yards and went eight-for-19 for 115 yards through the air.

-Linebacker Demario Davis recorded his first career interception when he hauled in a Brees pass intended for TE Benjamin Watson that was initially deflected by S Dawan Landry. The Jets converted the take-away into a 39-yard field goal to take an early 3-0 lead.

-Cornerback Antonio Cromartie intercepted his first pass of the season on a Brees’ throw intended for WR Nick Toon at the Saints 39-yard line. The Jets offense converted the take-away into a five-play, 39-yard touchdown drive that gave the team a 20-14 lead. This was the 11th interception for Cromartie since joining the Jets in 2010, the most by any CB in the AFC.

-WR Josh Cribbs completed a 25-yard pass to TE Zach Sudfeld to put the team in range for a second quarter field goal. He later set up a Jets touchdown drive with a 42-yard kickoff return and a nine-yard run in the red zone for a first down.

-For the game, Cribbs completed one pass for 25 yards, carried three times for 12 yards, caught two passes for six yards and averaged 26.8 yards on five kickoff returns. He joins WR Jeremy Kerley (vs. TB, 9/8) as the only Jets to record a rushing attempt, reception and passing attempt in the same game this season.

-With a nine-yard sack of Drew Brees in a third quarter, defensive end Muhammad Wilkerson extended his streak of consecutive games with a sack to five. Through nine games, Wilkerson has a career-high eight sacks on the season to the lead the team as well as all NFL 3-4 defensive linemen. Wilkerson now has 11 sacks in his last 14 games.

-Linebacker Calvin Pace recorded a seven-yard sack of Brees, increasing his season total to five, and forced a fumble by Brees on the play. His five sacks rank second behind Wilkerson and are the most he’s recorded in a season since registering 5.5 in 2010. Since joining the Jets in 2008, Pace leads the team with 33 sacks and 14 forced fumbles.

-Folk continued his perfect season by connecting on all four of his field goal attempts, converting from 39, 21, 47 and 45 yards, and has now converted all 23 field goal attempts this season, the most in the NFL without a miss. Folk ranks second in Jets history with 23 consecutive field goals and is now one short of Jay Feely’s club record of 24 consecutive field goals set from 2008-09. Folk registered four-or-more field goals for the fifth time in his career and third time as a Jet. His teams are 4-1 when he connects on four-or-more kicks in a game.