The Miami Dolphins came off their bye refresh for the rest of the season, while the Buffalo Bills continues to stay hungry with no expectations outside Orchard Park, New York. Slowly, after getting off to a rusty start, the Fins had a one-point lead with less than three minutes remaining in the game until quarterback Ryan Tannehill was sacked by Bills’ defensive end Mario Williams causing him to fumble to set up former Dolphins’ kicker Dan Carpenter to kick the Bills (3-4) to victory with :33 second left in regulation.

“It’s frustrating; we put ourselves behind early with turnovers,” said Dolphins’ guard Richie Incognito. “Coming down the stretch we had an opportunity to win the game and we made another mistake, another turnover. We’re killing ourselves right now, it’s on us.  We had success running the football, we were picking up chunks of yards, we were getting first downs.

“We found a little bit of a rhythm and we started out the game down 14-0, a lot to work on, a lot to get corrected, we’ve got a big week coming up,” he continued.  “It’s a good thing we’ve got the (New England) Patriots coming up because we turn the page quick and get on to another good opponent.”

The Dolphins was down early 14-0 entering the second quarter, with a boost from a pick six by Bills’ rookie defensive back Nickell Rickey when he intercepted Tannehill’s first pass of the game, returning it for a 19-yard touchdown.

“I have to do a better job of getting the team ready to play,” said Dolphins’ head coach Joe Philbin. “We did not come out playing very well. We decided to take the football and on third down we throw a pick-six. We had a penalty that was critical in the first quarter — I think they had a 44-yard drive off of that. We have to do a better job. I have to get the team ready to play better earlier, no question.”

Through patience and balance, the Dolphins fought their way back as Tannehill connected with wide receiver Brandon Gibson twice for touchdowns.  Tannehill completed 19 of 37 attempts for 194 yards, three touchdowns and an interception.

The Dolphins were able to produce 120 yards on the ground, while keeping the Bills under 100-yards (90).

However, with the don’t quit attitude of the Bills and quarterback Thad Lewis, who finished with 202 yards passing off 21 for 32 attempts, Buffalo just kept chipping away after being down by four midway through the fourth quarter.

“I feel like he did a decent…they went really hard, we just have to be able to finish. We did a good enough job containing them and preventing the big plays, we just didn’t do enough.”

Game Notes by Courtesy of the Miami Dolphins

-Daniel Thomas made his first start of the 2013 season and the third of his NFL career vs. Buffalo (10/20). The last time the third year running back started was January 1, 2012, the final game of the 2011 season against the New York Jets.

-Jason Trusnik made his first start of the 2013 season and the third of his Miami career vs. Buffalo (10/20). Trusnik’s last start came on December 23, 2012 against the Buffalo Bills. 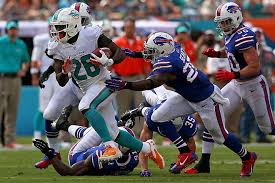 -Gibson recorded his first career touchdowns as a member of the Miami Dolphins vs. Buffalo on four and 13-yard passes fromRyan Tannehill. It was Gibson’s tenth and eleventh career touchdown. This was Gibson’s second career multi-touchdown game vs. the New York Jets (11/18/12).

-Tannehill notched a career-high three touchdown receptions vs. Buffalo (10/20). This was the fifth career game where he has thrown multiple touchdowns. The last Dolphins quarterback to record three passing touchdowns in a game was Matt Moore at the New England Patriots (12/24/11).

-Miami registered four penalties vs. Buffalo (10/10), compared to six by the Bills. They have had fewer penalties than their opponents in five of the six games to start the season.

-Tannehill’s 46-yard pass to Mike Wallace vs. Buffalo (10/20) was tied for the sixth-longest in the quarterback’s career. It was the second consecutive game that Wallace had a reception of 40 or more yards.

-Olivier Vernon recorded a sack in the first quarter vs. Buffalo (10/20) for the third consecutive game. He now has 3.5 on the season and 7.0 sacks in his career.

-Chris Clemons recorded his first interception of the year and fourth of his career vs. Buffalo (10/20). Every starter in the secondary now has an interception on the season and Miami has seven interceptions in six games in 2013. In 2012, Miami had 10 interceptions for the entire season.

-Reshad Jones notched a sack vs. Buffalo (10/20). With the sack Jones is tied for fourth place in team history for most sacks by a Dolphins defensive back.

-Dimitri Patterson recorded his first career sack as a member of the Miami Dolphins vs. Buffalo (10/20). Patterson now has 2.0 sacks in his career.